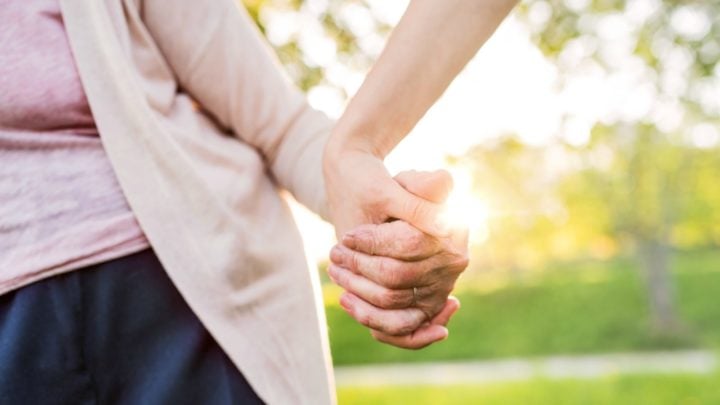 Just four months after marrying the love of his life Toni in 2010, Aiden discovered his new wife was living with an incurable brain cancer. Source: Getty

While most people make vows about sickness and health when they get married, chances are they don’t imagine the former becoming an issue until much later down the track.

That wasn’t the case for Aidan Shields, who, just four months after marrying the love of his life Toni in 2010, discovered his new wife was living with an incurable brain cancer.

“We had a wedding, we had our whole lives to plan ahead of us and then she got diagnosed with brain cancer four months after,” Aiden told Starts at 60.

While Toni had been experiencing headaches and temporary vision problems before her diagnosis, the couple put the symptoms down to the stress of work and planning a wedding. After seeing various health professionals, one doctor suggested Toni get a CT scan, which detected a large white mass in her brain. This resulted in surgery a few days later and confirmed the mass was stage-three cancer.

“You’ve got to accept reality,” Aiden, who is participating in the Moments That Matter initiative through Palliative Care Victoria, said. “We always planned for the worse, hoped for the best.”

Despite the diagnosis, Aiden said the next five years of his and Toni’s lives were “fantastic” and “enriched” because of her health situation.

“When you know you’ve got cancer, you really think about your time and things don’t stress you. You start to focus on things that are really important in life,” he said.

The pair travelled to Tahiti and France, saw the musicals they loved, walked their dog daily and visited dozens of cafés in Melbourne. They also renovated their home and made plenty of time for family and friends.

Read more: From fear to sadness: The emotional impact palliative care has on carers

Toni underwent a second surgery on her brain in 2015. It was here where doctors told her there wasn’t much more they could do for her.

Still, the couple soldiered on, spending every day together and not giving up hope. Eventually, Toni began experiencing seizures and started receiving palliative care at home in 2016. She received home care for eight months before she passed away in June, 2017.

“I thought it was going to a hospice, managing pain on drugs,” Aiden recalled. “Our experience was everything else but that.”

Through pastoral care, Toni talked about her emotional and spiritual health with a councillor and was also offered music therapy to manage her anxiety. This aspect of palliative care also helped the couple have difficult conversations about death and what would happen when Toni passed away.

“There’s no point in trying to avoid the elephant in the room because it’s just going to get bigger,” Aiden said. “Toni would even say, ‘Aiden, when I pass just make sure you take care of yourself. Just try and find someone that helps’. Those chats are surreal at the time, but I’m so glad we did it.”

It also allowed the couple to feel comfortable enough to pick out Toni’s plot in the cemetery and even meet with a funeral celebrant.

“You’re talking to a person who’s going to plan your funeral, be the MC,” Aiden said. “But there was no point avoiding the stuff. It would make us feel better.”

Physiotherapy also kept her moving until her last day, while palliative care staff helped her in her later days where she couldn’t speak or had difficulty moving her arms. And, while the day trips she had with Aiden changed, they still allowed Toni to make the most of her time.

“Palliative care helped her live longer and have much more fun with a fuller life in the limited time we had,” Aiden said. “I never saw Toni in a palliative care bed or hospital on drugs where she wasn’t herself. She was still herself to the last day.”

And, while Aiden valued his role as a carer for his wife, he said it was important for him to accept help.

“These people are here to help. They will definitely make your time in palliative care well, increase the time you’ve got and make that time more enjoyable,” Aiden said. “It was a hard time of my life, but it was still fun and really enjoyable.”

Do you know someone who’s been impacted by cancer? Have you had experience with palliative care?