‘Like a horror movie’: Mum’s pleas for assisted dying before cancer death 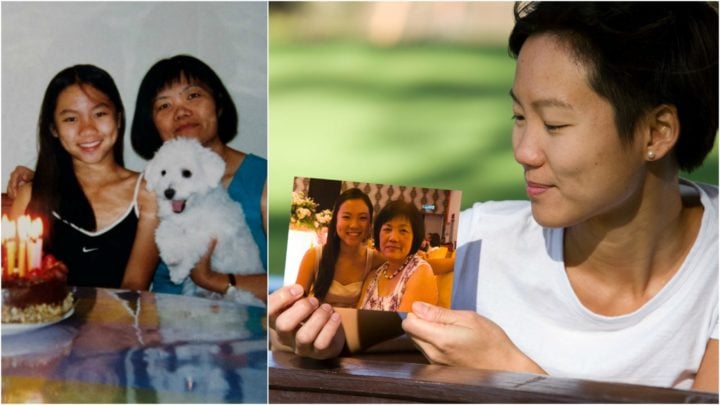 Perth woman Belinda Teh is walking from Melbourne to Perth to raise awareness of Voluntary Assisted Dying. Source: Supplied/GoGentle.

Losing a parent can be difficult to come to terms with regardless of the circumstances, but for Belinda Teh, her mum’s “horrific” death from terminal breast cancer in April 2016 left her feeling alone, frustrated and desperate to effect change.

Belinda’s mum Mareia was diagnosed with rare triple negative breast cancer in February 2016 and, despite being given an initial prognosis of three years to live, the registered nurse passed away in excruciating pain just 62 days later, having made two requests to her oncologist for help to die on her terms – which were both refused in accordance with the law.

Belinda, just 23 at the time, spent weeks caring for her beloved mum, both at home and in hospital, whilst trying to come to terms with the shock of her terminal diagnosis, before Mariea was moved to a hospice where she sadly died after doctors revealed that the chemotherapy was having no impact on her aggressive, advanced form of cancer.

As she watched her mum struggle through the pain – made worse by a secondary spinal tumour which fractured her vertebrae in two places – Belinda described her mother’s final hours of life as “a nightmare”. The digital marketing professional revealed that, had it been legal, voluntary assisted dying could have “saved her mum from hours of suffering”.

“The last four hours of my mum’s life were just a nightmare,” she told Starts at 60, in an exclusive chat. “Her eyes were opened and pointing in different directions, her body was twitching all over.

“It was like watching a horror movie, but your mum is the star of the horror movie and you can’t turn it off for four or five hours.”

Mareia, a devout Catholic, had never discussed the issue of assisted dying with her daughter and, once her requests had been made, never broached the topic again before her death three-years ago. However Belinda said she questioned her mum’s request for help dying for a long time after her death.

She said: “I asked myself for a long time, ‘Why did my mum go against her faith and ask for what she asked for?’ Then I thought about the facial expression and body language and the way that my mum held herself when she made her request. She made the request with absolutely no drop of shame in her voice.

“She held her head high, looked her oncologist in the eye and very calmly, confidently and rationally … made her request respectfully. And she respectfully accepted the fact that it was refused. And she did that twice.

“To me it is 100 per cent clear that she did not make that request despite her faith, she made it within the framework of her faith. I like to say that my mum had a chat with the man upstairs and they figured it out between them and he basically told her ‘What you are doing is okay Mariea and I love you and support you’.”

Mum was a registered nurse with 39 years of experience, and spent the last decade of her career working in aged care. Her requests for assisted dying were not a rash decision – she knew what was coming for her. My heart breaks because mum couldn’t have the choice that she wanted, but I hope that one day soon in WA, people who find themselves in her position will have better options at the end of life #bebravewa #belindaswalk

Belinda, 27, has now made the decision to channel her emotions into a challenge and, with the help of assisted dying charity GoGentle, she has planned a mammoth walk from Melbourne to Perth to raise awareness of the controversial topic, as the state parliament in Western Australia prepare to debate a Voluntary Assisted Dying bill later this year.

The 27-year-old will set off from Melbourne’s Parliament House on Tuesday, and walk 40km a day for 70 days until she reaches Perth’s parliament building. She will be followed by a support vehicle which Belinda explained is symbolic of the support and help that people look for when they are faced with death.

“I am going to do this journey on my own,” she told Starts at 60. “Just because the support vehicle is there doesn’t mean that I am going to use it, I will only use it if I really need it. But knowing that you have support and can ask for help when you need it, that gives you the confidence to go through an extremely difficult journey, and that is how it is for assisted dying and having that choice, knowing you’ve got the support there if you need it.”

Belinda added: “That’s one thing that struck me when I reflected on what my mum was really asking for. I kept thinking and asking myself, what did my mum want? She wanted assisted dying but when you really boil it down, she was asking people to help her. People who were in a position to help her, and they couldn’t do that.”

Following her mum’s death, Belinda also made a submission to the WA parliamentary inquiry into assisted dying, personally detailing the final stages of her mum’s life and the impact her death had had on her to a panel of eight politicians.

“I almost feel like no matter how I phrase it, it’s never going to sum up what that experience was like,” she said. “It was the most traumatising experience of my adult life. Nothing could really paint the picture and it’s very difficult to communicate that to someone else. The strongest words fail to adequately describe what I felt and what my mum went through.

“That is the point that I really drove home when I made my submission. I was looking at the draft bill that Victoria had put forward and there was some discussion about if someone makes two requests for assisted dying, they should have to wait seven days.

“I had a calendar and I put an X where my mum died and R1 and R2 where she made her request and I showed that no matter if mum had been required to wait two, 10, 14 or 21 days it still would have saved her from the last four hours of her suffering. So my mum would have been helped enormously by being able to have that option.”

3 years ago my mum died from terminal breast cancer. She was in so much pain; I've never seen pain like it. I'm walking from Melbourne to Perth so that her suffering wasn't in vain. #BeBraveWA ##assisteddying #belindaswalk #WApol #springst pic.twitter.com/7dohC6HjJS

Currently Victoria is the only state to have legalised Voluntary Assisted Dying. The law, which was passed in late 2017, comes into effect on June 19.

Are you in support of legalising Voluntary Assisted Dying? Have you lost a loved one in similar circumstances to Belinda?