Prepaid, bonds and insurance: What’s the best way to pay for your funeral? 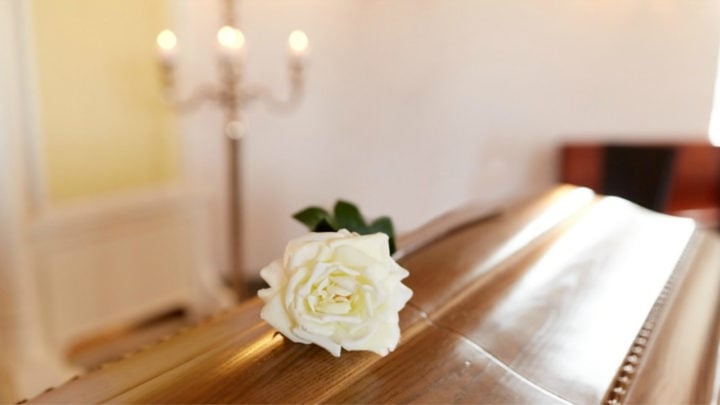 Many would be surprised to know that one of these options is never recommended by professionals. Source: Getty.

It’s a grim thought, but organising your finances to cover your funeral costs can be one of the most important parts of alleviating stress from your family in an already vulnerable time. However, a report from Australian Seniors said that only 25 per cent of seniors have their funeral arrangements in place for when they pass.

This worryingly low number could be due to the emotional stress of prematurely facing mortality or simply the confusion of knowing which option is best suited. So, to lay out the facts, Starts at 60 chatted to Cale Donovan, the co-founder of Bare Cremation, about the three main options including prepaid funerals, funeral bonds and funeral insurance to figure out which was objectively the best and which should be forgotten.

Through a set contract, you can allocate your money in such close detail that you also take care of planning your service whilst you’re paying it off. Donovan says that planning and paying in advance not only allows you full control over your service, but it also lessens the burden on loved ones.

“People don’t want to pass on the emotional or financial stress of making the arrangements to their loved ones, as it’s already a really tough time,” he said. “A pre-paid funeral alleviates a lot of the uncertainty around the ‘what’ as well as the ‘how’.”

Pre-paid comes with many incentives including the ability to make a payment that is set in today’s price which helps avoid inflation for those who are making plans years in advance. Also, with a fixed amount agreed on in the contract, pre-paid funerals succeed in providing the buyer with a concrete service after a period of time, unlike other options which present continuous payments with no set deadline.

Those who receive the Age Pension will also be relieved to hear that any money invested in pre-paid funerals with a contract or a funeral director assigned to it, will not be counted as an assessable asset. This means it won’t be subject to the asset or income test for any government allowances or pensions and therefore has no effect on the normal rate.

However, like anything, it comes with a few downsides. It’s important to shop around, as many traditional funeral homes will include fairly heavy premiums or administration fees that can raise the overall price. Donovan says this option is often linked to cash flow.

“The only reason I could think of as to why you wouldn’t [take this option], is that you simply can’t afford it. Unfortunately for many people that’s the situation. However, there are payment plans available.”

Changing your mind may also cause issues, as getting a refund or transferring to a different provider (particularly interstate or internationally) may not be possible. However, all of this information will be included in the fine print of the contract, so it’s vital to read and compare contracts carefully.

Donovan said pre-paid funerals are the best option for those who want certainty regarding their service, and to reduce the burden on their family.

“They have an idea of what they want and how they’re going to pay for it,” he said. “Everyone’s circumstances are different. Maybe it’s someone who’s family doesn’t get along and they don’t want to have five different decision makers on their passing. They know it will cause issues among the family so they organise it themselves.”

Funeral bonds are similar to pre-paid funerals, however they come with less order and specificity regarding money allocation. This option involves investing money that is exclusively put aside to cover your funeral expenses.

The bond can be invested through an investment company or directly from a funeral director of your choice. With funeral bonds, the money can’t be accessed until after you pass, at which time loved ones will be handed the lump sum to organise your service with.

Donovan said that funeral bonds are good for ensuring there is some money set aside. He added: “It’s kind of like a forced savings; it’s a term deposit that can only go towards one thing.”

Another positive aspect of funeral bonds is that they are also exempt from the asset and income test as long as they are within the Funeral Bond Allowable limit which currently stands at $13,250 but changes every July 1. Funeral bonds also allow you to pay in advance with the possibility to grow your savings over time. And unlike pre-paid, you aren’t locked into a contract, meaning there is the freedom to choose your own funeral director.

However, like any investment, there’s also a risk of your bond falling behind due to inflation. Unlike pre-paid funerals, the price you’re paying for the service may increase over time, which means the burden could still fall on loved ones to cover a margin of the cost.

“The bond is for someone who is more thinking the time will eventually come and they’ve set some money aside for that, but someone else can figure it out when it’s all said and done,” Donovan said. “I think that people that are more open-ended and don’t want to think about it will just invest and see how they go.”

Funeral insurance is usually included as a sector under the umbrella of other insurances. After passing, loved ones will receive the lump sum of money and are left to organise the service themselves. While it may be the most publicised and easily accessible option, Donovan said he has never thought this option was financially viable for anyone and advised against it.

“Funeral insurance has never made sense to me,” he said. “The whole thing is kind of broken. Part of that reason is that most insurance is for things that you don’t know will ever happen… But everyone will die in the end, so you shouldn’t pay this sort of risk adjusted month-on-month payment for something that you know is inevitable.”

This sentiment is echoed throughout the entire industry with Michael Hamilton, the General Manager of Pre-Need at InvoCare saying those who invest in funeral insurance could be spending four times more than necessary when they go with this option. According to InvoCare’s review on current funeral policies, people could be paying as much as $40,000 for a service through funeral insurance that would cost only $6,500 for with a pre-paid option.

“Funerals are a certainty, so any insurance policy has to charge the consumer more than the final cost of the funeral to be profitable; it simply can’t work,” Hamilton said.

Part of the appeal for funeral insurance is the ability to avoid speaking about death with family members and instead just tack it onto an everyday expense. However, Donovan says the conversation doesn’t have to be as drawn out as people might believe.

“I would say kick off the conversation but do what’s best for you,” he said. “Open up the topic of discussion but let the family know that you just want to lock in something with some certainty.”

While there are several options to choose from when planning for the inevitable day, it’s clear that some of these paths are more financially beneficial than others. So, if you don’t want to leave the burden with your loved ones, it might be time to speak to a funeral professional and get your end-of-life plans in order.

Have you thought about paying for your funeral ahead of time? Is this a conversation you've had with your family?