Expert tips on keeping funeral costs down without compromising quality 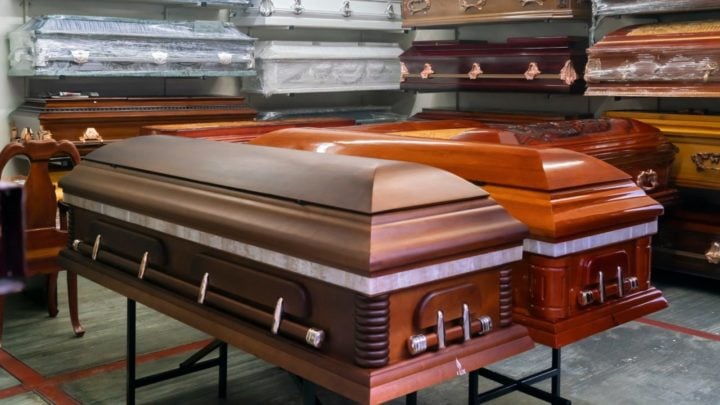 Research found a coffin can comprise more than 30 per cent of the total cost of a funeral.

Let’s face it, funerals can be expensive. You might have even heard horror stories about people faced with a bill for tens of thousands of dollars for what was a relatively low-key send-off.

Funeral directors have often been accused of overcharging, with consumer group Choice recently claiming the funeral industry makes big profits by taking advantage of people at a vulnerable time.

Australia’s billion-dollar funeral industry is dominated by two big players (who own hundreds of funeral homes between them) and Choice believes that stifles competition – and pushes up the costs.

In fact, Choice says there’s a tendency for some funeral operators to ‘upsell’ more expensive options that people neither need nor want. Author Glennys Howarth even came up with a term for this trend towards ignoring preferences and standardising funerals, calling it ‘the McDonaldisation’ of funerals.

But that doesn’t have to mean your funeral or that of your loved one has to cost a flabbergasting amount.

Myth busted: A funeral doesn’t have to cost the earth

Organising a funeral fit for a royal costs money – and the more elaborate the arrangements, the quicker those costs can add up. But you can save money by comparing funeral services options, or even engaging in a bit of DIY.

Comparison sites such as Gathered Here can help if you’re prepared to shop around and find a provider that fits your family and your budget. But remember that not all comparison sites are independent, and some don’t even provide a full comparison between providers.

That said, you don’t have to sign up for a bells-and-whistles funeral with a commercial provider. If you take on some of the planning yourself, you can keep the costs of the funeral to a minimum, while still arranging a respectful send-off.

Is a burial the be-all and end-all?

Jenny Briscoe-Hough set up Tender Funerals, of which she’s the director and general manager, after paying $11,000 for her own mother’s funeral, even though she and her family wrote the eulogy, did the flowers and kept the service simple. Tender Funerals is a not-for-profit funeral provider based in Port Kembla, New South Wales, and Briscoe-Hough is an expert in helping families farewell their loved ones in a personalised way without blowing their budget.

She says the first way to keep funeral costs at a manageable level is to consider cremation rather than burial. “There are a lot of extra costs with burial, including the cost of the burial plot, digging the grave, closing in of the grave and marking the grave,” she says.

Depending on your location, burial can increase the cost of a funeral by more than $10,000, in addition to other expenses such as stonemasonry and maintenance of the gravesite. With our growing population putting pressure on available land supply, don’t expect burial costs to fall any time soon either. Already, the cost of a burial plot in Sydney can range from $4,000 to $52,000.

A cremation costs considerably less than a burial – usually around $950 – and a direct cremation (where no service is involved, leaving you free to plan a memorial service at another time or location if you wish) is possibly the cheapest option of all. There’s even a new Australian service called Bare Cremation that allows you to organise a direct cremation entirely online at what it says is the lowest cost available in the country.

Briscoe-Hough also says some of the costs of a more traditional funeral can be minimised. “There’s not necessarily a ‘proper’ way to do something,” she says. “For example, you don’t need to have flowers, people can bring flowers.”

We explain more here how you can forget some of the old expectations of how a funeral should be, in favour of a more personalised farewell.

An investigation of death care and the funeral industry by the University of Sydney Business School found coffins – the fancier ones are known as caskets – made up 31 per cent of the price of funerals. This suggests the industry was ‘marking up’ the price of the coffin to subsidise less profitable parts of the funeral business.

But there are many ways you can avoid that funeral director mark-up. Making your own coffin is one option; Tasmania even has a Community Coffin Club whose members get together for monthly sessions spent crafting their own coffins.

But if you’re not handy with tools, some retailers such as Costco now sell coffins direct to consumers. It’s possible to buy coffins online too – although the online option isn’t advisable if you need your purchase delivered in a hurry!

Some funeral homes offer coffin rental for use during the service (the cremation itself then requires only the use of a cardboard ‘cremation capsule’) which can significantly lower the overall funeral cost. For a direct cremation, where there’s no accompanying funeral service or memorial, a cremation capsule will also suffice.

Cardboard coffins, however, aren’t always as cheap as you’d imagine, with some costing well over $1,000.

But before deciding on any coffin, it’s important to check whether your funeral provider will permit the use of your chosen option and whether it will charge a fee for using a coffin it didn’t provide.

Overall, Briscoe-Hough says that by keeping a close eye on costs, a basic funeral with cremation can be done for around $2,500. While that’s much cheaper than the average funeral, if money’s tight, it can still be a stretch.

Think about who’s paying for the funeral

The executor of the deceased person’s estate is responsible for picking up the tab (which can be reimbursed from the estate) but it’s usually close family who make the funeral arrangements and pay the costs upfront, to be reimbursed later.

Various schemes – such as prepaid funerals and funeral bonds – can take away the financial stress of meeting funeral expenses, but Briscoe-Hough suggests an old-fashioned alternative:

Funeral insurance is heavily marketed to retirees, but the Australian Securities and Investments Commission warns some policies are overpriced and might not even provide the cover you need.

For those who can’t meet the cost of a funeral, some help is available. If you’re in receipt of a Centrelink payment and your partner dies, you may be eligible for a bereavement payment, made as a lump sum. Your loved one’s bank may also be able to assist. For example, Westpac allows families access to the deceased’s account to pay for a funeral or other celebration of their life.

If the estate can’t meet the costs and neither can surviving relatives, funeral assistance may be available from your state or territory government to help with funeral arrangements, although it varies between locations and is subject to strict means testing. Alternatively, community support groups might be able to offer some financial support.

Have you been shocked by the cost of a funeral? What options would you consider to cut costs?