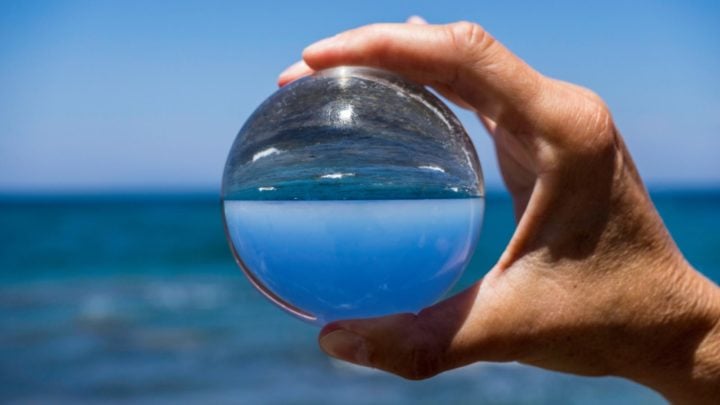 Mary is working on turning her world the right way up in the months after her husband, Bob's, death. Source: Getty Images

One year ago I lost the love of my life. I wrote a blog about it and it was published on Starts at 60. Now that 12 months have passed, many have asked for an update. Do I call it a year of firsts, as many widows and widowers refer to it? I know I faced many firsts, but I like to think of of as putting my world right side up again.

Yes, one year ago my world went upside down in a matter of six hours. Since that day I’ve had to face and make decisions that we all will need to make, sooner or later. It’s what happens when we lose a spouse or a loved one. I’ve learned there is no right or wrong decision when we are making them.

I called it ‘coping’ with the day or the event. You might be wondering how I did that.

The first thing I had to cope with was my birthday, which came three months after my husband’s death. I realised there would be no birthday card, no flowers, not even a birthday dinner. These were the things my husband had done for me.

Then a friend invited me to a quilt expo and I went and celebrated my day doing what I love as a hobby; something quilt-related. It was a good day and the start of a renewed friendship from the past.

Next we had Father’s Day. I say we because of my three children. It was the first time all of us had no father there to celebrate with us. I’d lost my own father in 2014, then my father-in-law in 2016 and now I had no husband to share the day with in 2019. We treated the day as any other Sunday.

We faced his birthday in July. I visited the cemetery and cried many tears that day.

The one day I dreaded the most was the weekend of our 43rd wedding anniversary. It was difficult because not only was that weekend our special day, but our daughter was nominated for a teaching award by her school, which was also being awarded to her by her alma mater and her father’s favourite football team at half-time. I was unable to attend the occasion as once again my friend who’d rescued me on my birthday convinced me to go on a quilting road trip with her.

When I think about those ‘firsts’ I think I coped quite well. My grief would and still comes at night, when I’m lying in bed alone. I shed many tears.

I wasn’t sleeping for a while and in April 2019 I admitted I needed help. I called my doctor and was seen to immediately. He was amazed I’d managed three months without calling. By this stage I was desperate and exhausted.

I had returned to work and was keeping busy, so I didn’t have to think about anything. Yet, at night my mind would race and — at 62 — I needed a light on to sleep. I didn’t want to be alone so I opened my home up to a niece who was trying to escape from an abusive relationship. Although I had my son here, I told myself it’s what my husband, Bob, would have wanted. He would have welcomed her into the home and done what he could to help her.

Two weeks after that, another niece and her two children had become homeless, so with my nice five-bedroom, three-bathroom house, I said “Come on!” I admit both of these decisions were mistakes.

With me still grieving and my son still grieving it became a house of turmoil. There were too many of us dealing with different problems. By July, I had asked the nieces to leave. It made for a much happier environment for my son and I and we were then able to put our grief into perspective. What we learned was that our grief was coming between us and the loving relationship we shared as mother and son had been compromised. It has since improved.

The biggest hurdle I overcame was allowing myself to purchase something ‘just for me’. When Bob was alive I would always discuss and check with him before purchasing anything I needed. The realisation that it was okay for me to spend money on a new pair of shoes came to me in September. Yes, something as simple as shoes. I was out shopping with my daughter and I found a pair of boots I loved and wanted. When I looked at the price I determined that they were ‘too much’, but my daughter said, “Mum, it’s your money now, not yours and Dad’s. Are your bills paid for the month? If so, buy them. You don’t need anyone’s permission.”

I learned it was okay to buy something frivolous once in a while. Other purchases I’ve made throughout the past year I feel have been ‘necessary’.

Thinking I’m doing okay, the crying lessened. I feel this is progress. I even joined a ‘widows only’ group and was doing evening activities and then *bam* November came.

I had to have a total knee replacement. The first few weeks following, I was doing well but then I found I was crying all day and had no desire to eat or bathe. I was angry with everyone. I saw a therapist and would sit in her office for an hour just crying and being angry. She told me that this was the deepest part of my grieving. I realised then Bob was really, truly gone.

I was housebound and dependant on others for physical therapy on my knee, my post-op appointments, going to check the mail each day and even just getting to the store to buy milk. Bob had always been thee to meet my needs. I was so angry with him and I felt guilty about that and his death. I’ve learned it’s okay to feel like this, to admit it and to express it out loud.

When Christmas approached nearer came the one year anniversary of Bob’s death. However would I handle it? I spent Christmas with our daughter, the first time in 10 years. I’d hoped that my other two children would be there for each other, but my other daughter announced that if I wasn’t going to be around for Christmas, neither was she. She would fly to Arizona and be with her friends. It was difficult. I felt I had to choose between my children.

Thankfully my sister stepped in. She convinced me to go and be with my daughter and that she would spend Christmas with my son. As it turned out, my son got the week of Christmas off and booked a last minute flight to be with me and his sister for Christmas. We ended the year by making a trip to the Rose Bowl, just a mother and son trip. I think it was a way for my son to remember his dad. We spoke about Bob the whole weekend and how much he would have liked a trip like that.

On reflection I can see the lows but there were so many victories. My world is still upside down at times, but things are getting easier.

Have you lost a spouse or loved one? What did you learn about yourself while you were grieving?