‘You’re never too old! Why my sister quit retirement and returned to work at 68’ 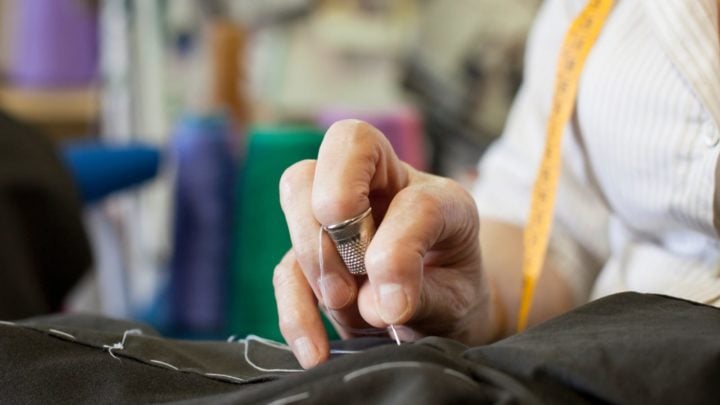 Although my sister Gillian mostly worked from home throughout her career, when it came to retirement, being alone at home wasn’t the same without business-related work to do. Her husband was still working and sadly their two dogs’ lives had come to an end so Gillian no longer had their company nor was she being kept fit by the twice daily walks with the dogs to the park.

Her work as couturier and in theatre costume-making had meant she had been sewing every day and, as she said in hindsight, being creative is very therapeutic. Keeping house just didn’t fit the bill and gradually Gillian became low in morale, not helped by living in a part of London that was becoming busier and noisier as a result of a recently constructed tube line linking their area to the London business world.

When it all became too much, Gillian went to see her doctor, a very understanding woman who sent her to see the therapist at the Shoreditch Healthy Living Centre. Gillian told me that following talking sessions with the therapist, it was recommended she do yoga, Pilates and acupuncture.

“It was after a few weeks of doing that and I was feeling better that she asked me to do a sewing class. I was quite hesitant and nervous but she said I would get plenty of support from her,” Gillian said.

So at 68 years of age, Gillian found herself earning again. They say you’re never too old to learn, in Gillian’s case it was never too old to teach. Later, with the classes proving popular, she was given an assistant and sometimes had volunteer students helping in order to give them work experience in teaching.

On one of her teaching days, it was raining but Gillian hadn’t realised it was also very cold and her waterproof raincoat didn’t keep her warm enough, so when she arrived at the social centre and found the bad weather had kept all but three people away, she decided to use some thick material available for teaching to make herself a coat to wear home under the raincoat.

“It had been years since I’d done any pattern making, cutting and sewing, but it all came to me automatically and I finished the coat by the end of the lesson,” she said.

After seven years though, the teaching became too much for her. The centre was for people who had coping problems and many were not able to grasp intricate sewing, so teaching was taxing.

In addition, Gillian and her volunteer assistant had to set the room up with tables and chairs then get all the sewing machines out along with the boxes of fabric and sewing equipment. Then 2.5 hours later, put it all back in the cupboards again, most of the ladies helped with this and with sweeping up, but a couple of the ladies had serious problems and hearing them talk over their worries began to make running the classes too stressful for Gillian and she gave up the job.

Incidentally, the class, like all the classes at the centre were open to men too, but the few men attendees in Gillian’s sewing classes soon lost interest. They were more interested in the cooking classes!

Since she stopped teaching, Gillian has been very busy sorting and giving away all the leftover fabrics she’d packed in boxes and stored in the studio-workshop part of her home. With the help of a friend, she put a lot of the house furniture into storage so that the studio-workshop could be rearranged to accommodate her husband who was about to retire and wanted to concentrate on oil painting. Like Gillian, he had been to art college.

In addition they were having the kitchen refitted — all with the intention of selling up and moving out of the big city and buying a house in the countryside with an outbuilding for a studio-workshop. They aren’t downsizing like many retired people but are wanting to buy a bigger house with spare bedrooms for family visitors!

Their house sale was put on hold because of everything that happened with coronavirus, but estate agents are now able to organise viewings. Because of social distancing, they leave the agent to show prospective buyers over the house and go off for a drive for a change of scene. Hopefully there will be a buyer soon and they can concentrate on finding their dream home.

Did you retire and then return to work? Have you considered returning to paid employment after you retired?