Crimes that shook us to the core: The callous killing of Constable Coussens 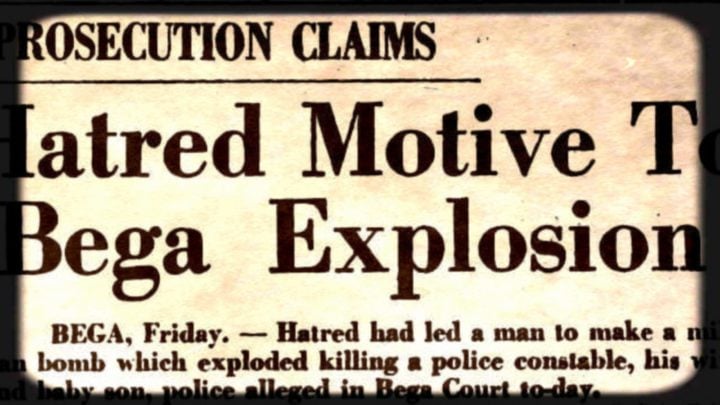 The headline of the article as it appeared in the Canberra Times on August 10, 1957. Source: Trove/National Library of Australia

There’d never been anything like it before in Bega, New South Wales, nor since. An explosive blast in the small hours of July 29, 1957, blew a home apart and left three sleeping people dead, all members of one family. A fourth miraculously escaped with his life. What caused the blast was not immediately clear, but detectives did what they do best, worked their way diligently and professionally through available evidence to establish the facts. The result was not a pretty story.

Kenneth Coussens was a Constable First Class with NSW Police. The 31-year-old had left the Royal Australian Navy in 1948 before becoming a policeman. He moved to Bega in 1954 and performed motorcycle traffic duties as a member of what is now the Highway Patrol. A stickler for upholding the letter of the law, he ensured those who erred were duly booked.

People are often a bit upset when given an infringement notice, annoyed with themselves for being at fault — or being caught. This was not the case with 32-year-old Myron Bertram Kelly. To him, it was something else again.

Through a 12-month period starting some time in 1956, Kenneth Coussens came in contact with Kelly on a number of occasions in the performance of his duties. Tickets were issued for traffic offences as well as faults with his tractor and rotary hoe. Although, as noted in the police report, “The conscientious policeman was doing no more than his duty”, Kelly felt Coussens bore him a grudge. He became enraged following a £40 fine (about seven times the average wage back then) and determined to seek vengeance.

Following one booking, Kelly drove inland to a mine site of which he was aware near Nimmitabel and stole explosives. In the haul, he took five cases of gelignite, detonators and at least 12 metres of fuse. He drove to another property at Nethercote where, for the short term, he concealed the haul. At the same time, he stole a six gallon cream churn from a local dairy.

There were further incidents in May and July, with words exchanged between the two. Kelly took action. Cramming 240 sticks of gelignite and detonators into the cream churn and using a 6m length of fuse, he sealed it all in with a wad of mud. He took the device late at night and placed it on or under the verandah of the Coussens’ house, going home for two hours before returning to light the fuse in the early morning. He made his way straight back to his own house before the explosion shattered the town’s peace, taking three lives.

With such a huge quantity of explosive, the two- to three-year-old fibro home was blasted apart. So violent was the explosion, the bodies of Coussens and his wife, Elizabeth, landed in a yard 45m away. Their seven-month-old son, Bruce, was not found for some time, his body eventually discovered behind a tree in the backyard. Amazingly, Roger, Mrs Coussens’ son from her first marriage, survived the blast. He struggled out through the wreckage, shocked but almost unhurt.

Whatever caused such a massive explosion — it shattered windows hundreds of metres away, including 100 in the local hospital — was a matter that met with a lot of initial conjecture. One early thought was that an aircraft from the nearby naval air base may have dropped a bomb, a theory quickly quashed. Police investigations soon narrowed down to a man against whom Coussens had issued several tickets, and the animosity subsequently shown towards the constable.

Evidence mounted, including the discovery of gelignite, detonators and fuse cord. Kelly was charged with murder. Brought before court, he was found guilty and sentenced to life imprisonment. He based much of his defence on the fact he’d been targeted by Coussens, even claiming the policeman at one stage purposely collided with him: “I was driving the rotary hoe. He followed me and opposite the police station he closed in to collide with the tractor. He then charged me with everything he could think of.”

Many locals believed Coussens had been unnecessarily hard on Kelly. Fifty years later, an item in the Bega District News would read:

There remain some people in the community who are sympathetic to Kelly and who speak of the constable “having it in for him”.

Senior Sergeant Garry Nowlan of Bega Police disputes (Kelly’s defence).
“You don’t use 240 sticks of gelignite to scare somebody. You don’t murder a family because you got a few traffic tickets.
“Kelly was judged by a jury of his peers and they got it right. He was a cold, reckless killer.”

Myron Bertrand Kelly — released after serving 22 years and who died in 2007 aged 83 — was a callous, convicted killer who will forever hold an infamous part in the town’s history.

The author would like to thank police reports, the ABC and Bega District News for background on this story.

Do you remember this crime from 1957? Are you interested in reading true crime stories?