Have the last laugh! Top 10 jokes of the year 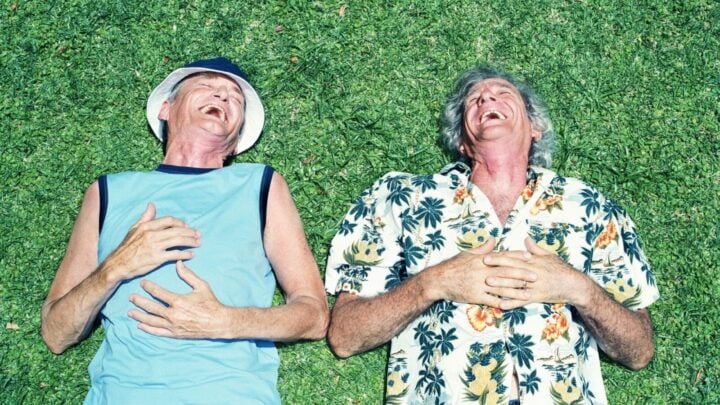 Have the last laugh on us! Source: Getty.

This year has been a struggle in many ways, but a good chuckle once a day helped relieve the tension for a lot of people – even if only for a moment. Whether it was a brain-teaser or a silly gag about gardening, no matter how cheesy, it’s always good to start your day with a laugh. So without further ado, here’s the top jokes from this year!

1. An old man wanted to plant his tomatoes

An old gentleman lived alone. He wanted to plant his annual tomato garden, but it was very difficult work as the ground was hard. His only son, Vincent, who used to help him, was in prison.

The old man wrote a letter to his son and described his predicament: “Dear Vincent, I am feeling pretty sad because it looks like I won’t be able to plant my tomato garden this year. I’m just getting too old to be digging up a garden plot. I know if you were here my troubles would be over. I know you would be happy to dig the plot for me, like in the old days. Love, Papa.”

A few days later he received a letter from his son.

“Dear Papa, Don’t dig up that garden. That’s where the bodies are buried. Love, Vinnie.”

At 4 a.m. the next morning, FBI agents and local police arrived and dug up the entire area without finding any bodies. They apologised to the old man and left. That same day the old man received another letter from his son.

“Dear Papa, Go ahead and plant the tomatoes now. That’s the best I could do under the circumstances.”

2. A drunk staggers out of a bar and runs into two priests

A drunk staggers out of a bar and runs into two priests. He goes over to the first priest and says: “Hey, I’m Jesus Christ!”

So the drunk goes over to the second priest and says: “Man, I’m Jesus Christ!”

Finally, the drunk gets fed up and says: “Here, I’ll prove it.”

He walks back into the bar with both priests and the bartender looks up and sees the drunk and says: “Jesus Christ, you’re back again?!”

3. A stranger noticed a warning sign about a dog

Upon entering a little country store, a stranger noticed a sign posted on the glass door that read: “DANGER! BEWARE OF DOG!”. Inside he noticed a harmless old hound dog asleep on the floor besides the cash register.

4. A man went to a therapist for marital problems

A man was having marital problems, so he went to his therapist. The therapist said: “When you get home, throw down your briefcase, run to her, embrace her, take off her clothes, and yours, and make mad passionate love to her.”

In two weeks he was back in the therapist’s office.

The therapist asked: “How did it go?”

The man said: “She didn’t have anything to say, but her bridge club got a kick out of it.”

5. A man was sitting next to an elderly woman on a flight

On a flight, a man was preparing notes for one of the parent-education seminars he conducted as an educational psychologist.

The elderly woman sitting next to him explained that she was returning home after having spent two weeks visiting her six children, 18 grandchildren and 10 great-grandchildren. Then she inquired what he did for a living.

He told her, fully expecting her to question him for free professional advice.

Instead she sat back, picked up a magazine and said: “If there’s anything you want to know, just ask me.”

6. An old man was on his death bed

There once was an old man who was about to die. He told his wife to put a bag of money in the attic. “When I die, I’ll get it on my way up,” chuckled the old man.

When the old man died, the wife went up to the attic and found that the bag of money was still there.

“I knew I should have put that money in the cellar!” said the old woman.

7. A man walks into a shoe store

A guy walks into a shoe store and asks for a pair of size-eight shoes. The salesman says: “But, sir, I can see from up here you’re at least a size 11.”

The guy says: “Just bring me a size-eight shoe.”

The salesman brings them, the guy stuffs his feet into them, ties them tight, and then he stands up, obviously in pain. The salesman just has to ask: “Sir, why must you have these undersized shoes?”

He says to the salesman: “I lost my business and my house, I live with my mother-in-law, my wife is having an affair with my best friend and my daughter is pregnant. The only pleasure I have in life is taking off these damn shoes.”

An elderly couple was celebrating their 75th wedding anniversary. The old man leant forward and said softly to his wife: “Dear, there is something that I must ask you. It has always bothered me that our 10th child never quite looked like the rest of our children.

“Now I want to assure you that these 75 years have been the most wonderful experience I could have ever hoped for, and your answer cannot take that all that away. But, I must know, did he have a different father?”

The wife dropped her head, unable to look her husband in the eye, she paused for a moment and then confessed. “Yes. Yes he did.”

The old man was very shaken, the reality of what his wife was admitting hit him harder than he had expected.

With a tear in his eye he asked: “Who? Who was he? Who was the father?”

Again the old woman dropped her head, saying nothing at first as she tried to muster the courage to tell the truth to her husband. Then, finally, she said: “You, dear”.

9. A police officer stopped a woman for speeding

A policeman stopped a woman for exceeding the speed limit. He asked the driver her name.

She said: “I’m Mrs. Ladislav Abdulkhashim Zybkcicraznovskaya and I am visiting my daughter in Tallahassee.”

The officer put away his summons book and pen, and said: “Well … Okay, but don’t let me catch you speeding again.”

10. Grandpa was celebrating his 100th birthday

Grandpa was celebrating his 100th birthday and everybody complimented him on how athletic and well-preserved he appeared. “Gentlemen, I will tell you the secret of my success,” he cackled. “I have been in the open air day after day for some 75 years now.”

The celebrants were impressed and asked how he managed to keep up his rigorous fitness regime. “Well, you see my wife and I were married 75 years ago. On our wedding night, we made a solemn pledge. Whenever we had a fight, the one who was proved wrong would go outside and take a walk.”