Daily Joke: A stranger noticed a warning sign about a dog 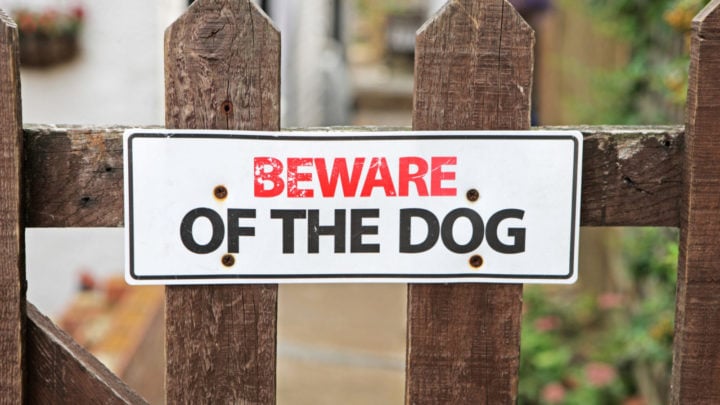 The stranger noticed a sign posted on the glass door that read: "DANGER! BEWARE OF DOG!" Source: Getty.

Upon entering the little country store, the stranger noticed a sign posted on the glass door that read: “DANGER! BEWARE OF DOG!”. Inside he noticed a harmless old hound dog asleep on the floor besides the cash register.

An old blind cowboy wanders into an all-girl biker bar by mistake. He finds his way to a bar stool and orders a shot of whiskey.

After sitting there for a while, he yells to the bartender: “Hey, you wanna hear a blonde joke?”

The bar immediately falls absolutely silent. In a very deep, husky voice, the woman next to him says: “Before you tell that joke, I think it is only fair, given that you are blind, that you should know four things: The bartender is a blonde girl with a baseball bat, the bouncer is a blonde girl with a club, I’m a 6-foot tall blonde woman with a black belt in karate and the woman sitting next to me is blonde and a professional weight lifter. Now, think about it seriously, do you still wanna tell that blonde joke?”

The blind cowboy thinks for a second, shakes his head and mutters: “No, not if I’m gonna have to explain it four times…’

Daily Joke: A guy sees a sign in front of a house that says: “Talking Dog for Sale.”

A guy sees a sign in front of a house that says: “Talking Dog for Sale.” He rings the bell and the owner tells him the dog is in the backyard. The guy goes into the backyard and sees a black mutt just sitting there.

The mutt looks up and says: “Well, I discovered my gift of talking pretty young and I wanted to help the government, so I told the CIA about my gift, and in no time they had me jetting from country to country, sitting in rooms with spies and world leaders, because no one figured a dog would be eavesdropping. I was one of their most valuable spies eight years running.

“The jetting around really tired me out, and I knew I wasn’t getting any younger and I wanted to settle down. So I signed up for a job at the airport to do some undercover security work, mostly wandering near suspicious characters and listening in. I uncovered some incredible dealings there and was awarded a batch of medals. Had a wife, a mess of puppies, and now I’m just retired.”

The guy is amazed. He goes back in and asks the owner what he wants for the dog.

The guy says: “This dog is amazing. Why on earth are you selling him, so cheap?”

The owner replies: “He’s just a big liar. He didn’t do any of that stuff.”