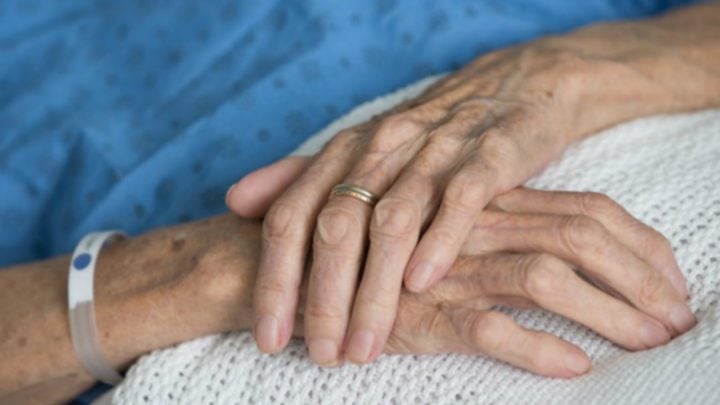 On Wednesday, history will be made in Victoria as voluntary assisted dying is finally legalised in the state.

The controversial law, which was passed in November 2017, will come into effect tomorrow with State Premier Daniel Andrews estimating that around one dozen people will access voluntary assisted dying within the first year, which will see patients being prescribed medication which they then self-administer at a time and place of their own choosing.

Victoria is currently the only Aussie state or territory to have a voluntary assisted dying law in place, which will give anyone suffering from a terminal illness, who has less than six months to live, the right to end their life legally.

So, as Victoria prepares for colossal change, where is the debate around voluntary assisted dying up to across the rest of the country?

The Sunshine State is the only Australian state or territory to have never debated a bill on voluntary assisted dying, however Queensland is currently in the early stages of a parliamentary inquiry into the delivery of aged care, end of life and palliative care. Members of the public were invited to make submissions to the inquiry until April 15 and a report is expected in November.

Prior to the closing date, the inquiry received thousands of submissions, the vast majority of which were in support of assisted dying. The committee is due to hand down its final report in November and, according to charity Go Gentle, will recommend to the government that it introduces a VAD law in the near future.

After Victoria, WA is the state furthest down the law reform process with a Voluntary Assisted Dying (VAD) law expected to be debated in the Western Australian parliament in the second half of this year.

Ahead of the bill being tabled, the state government established a Ministerial Expert Panel to provide expert advice on the development of voluntary assisted dying legislation.

The panel – made up of 13 experts – concluded public consultation last month having heard from a total of 866 people through public forums, roundtables and other meetings and received a further 530 written responses. The panel is now working on a report which will be presented to the minister for health at the end of this month.

One person who made such a submission was 27-year-old Belinda Teh who spoke to Starts at 60 earlier this month and opened up about the deeply personal reasons she wants to see voluntary assisted dying legalised in her home state of WA.

Belinda watched her mum Mariea pass away painfully from terminal breast cancer in April 2016 and revealed her devout Catholic mum actually begged medical staff for help to go not once, but twice, but they were unable to grant her requests for assisted dying as it would have been illegal.

“The last four hours of my mum’s life were just a nightmare,” she said. “When I reflected on what my mum was really asking for. I kept thinking and asking myself, what did my mum want? She wanted assisted dying but when you really boil it down, she was asking people to help her. People who were in a position to help her, and they couldn’t do that.”

Go Gentle Australia CEO Kiki Paul told Starts at 60: “In Western Australia this year we have a once-in-a-generation opportunity to pass a law offering kinder options at the end of life. But as in Victoria, success is going to require a community to step forward.”

Paul is calling on people to take action, which can be done by joining Go Gentle’s campaign by visiting their website.

In 2017, a private member’s bill introduced by Nationals MP Trevor Khan failed to pass in the NSW Upper House by one vote. MPs were given a conscience vote but both then-Premier Mike Baird and then-Opposition Leader Luke Foley refused to support it.

Trevor Khan vowed not to walk away from the issue and is expected to reintroduce a voluntary assisted dying bill later this year.

In 2016 the Death with Dignity Bill 2016 (SA) was defeated by one vote in the House of Assembly, however the state government has now launched a parliamentary inquiry into End of Life Choices.

People are being invited to make submissions to the joint house committee before August 1 and these can be submitted in any format or length by email (to the Secretariat [email protected]) or via post to the Secretary to the Committee, C/- Parliament House, GPO Box 572, Adelaide 5001.

According to organisation Dying with Dignity (Tasmania), a 2019 Voluntary Assisted Dying Bill is currently being discussed, with the aim of getting enough agreement for it to be debated in the Tasmanian Parliament later this year.

The NT was the first jurisdiction in the world to pass a voluntary assisted dying law in 1995, however the law was nullified in 1997 through the federal parliament’s Euthanasia Laws Act 1997 which removed the power of Australia’s territories to legalise euthanasia.

A private member’s bill, first introduced by Senator David Leyonhjelm in 2015, was defeated in the State Senate in August last year by 36 votes to 34. If passed, the bill would have seen the reversal of the 1997 Federal law.

Leyonhjelm said at the time that he was disappointed at the bill’s defeat, but vowed to continue fighting for “the rights of all Australians to decide how and when to end their lives”.

In March, the ACT parliament released a report into assisted dying after receiving more than 440 submissions.

Safeguards for a voluntary assisted dying law were then laid out by a parliamentary committee – should federal laws be altered to allow territories to legalise it in future – however the committee did not make any specific recommendations for assisted dying to be introduced as the ACT does not currently have the legal power to do so.

Paul told Starts at 60: “An overwhelming majority of Australians support safe, workable voluntary assisted dying laws. However, these laws can only happen in each state and territory if our political representatives in state parliament get behind them and vote for them.

“History has shown that our politicians seem afraid to heed the calls of the majority of the population, despite the ability to build extensive safeguards into a law. However, this issue will not simply go away.

“That’s why we can’t be complacent. All of us need to contact our local MPs – call them, email them, write them letters, go and see them face to face – leave them in no doubt that this issue is important to us and our families.”

What are your thoughts on the new law? Do you think terminally ill people should have the right to end their life, or do you disagree with voluntary assisted dying?