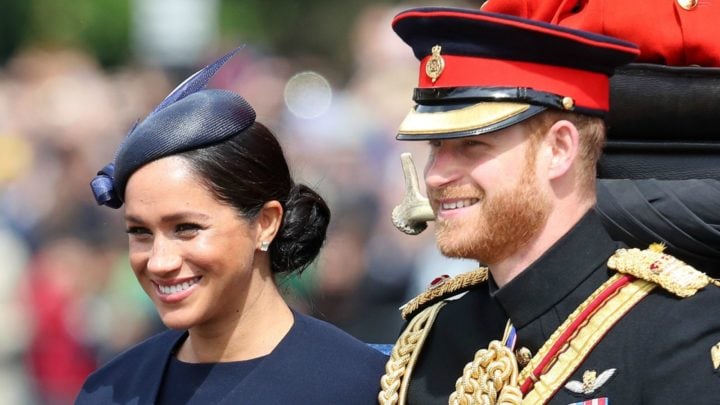 It's been just over a month since Meghan gave birth and she made her return to the spotlight at Trooping the Colour. Source: Getty

She’s been out of the spotlight for more than a month since giving birth to Archie Harrison Mountbatten-Windsor but Meghan, Duchess of Sussex, has made a triumphant return.

Despite failing to meet with US President Donald Trump and First Lady Melania Trump earlier this week as part of their three-day visit to the United Kingdom, Meghan was happily photographed at Buckingham Palace this weekend alongside other members of the royal family.

The 37-year-old was one of the very special guests at Saturday’s Trooping the Colour ceremony in honour of Queen Elizabeth’s birthday.

Trooping the Colour originated from traditional preparations for battle and has commemorated the birthday of the sovereign for more than 250 years, according to the Sussex Royal Instagram page.

“Trooping the Colour is performed by regiments of the British and Commonwealth armies for The Queen’s birthday parade, allowing them to pay a personal tribute to Her Majesty,” a post on the page read, alongside some snaps of Meghan and Harry from the day’s festivities.

More than 400 parading soldiers, 200 horses and 400 musicians came together on Horse Guards Parade in London for this year’s Trooping the Colour, with a 41-gun salute fired by The King’s Troop for the parades conclusion.

For her first outing, the new mother rode in a horse-drawn carriage alongside husband Prince Harry, Catherine, Duchess of Cambridge and Camilla, Duchess of Cornwall.

Meghan was every inch the royal as she made her entrance in a navy-blue dress by Givenchy. She accessorised with a matching headpiece by Noelle Stewart.

Read more: ‘I didn’t know she was nasty’: Trump’s shock at Meghan’s past comments about him

Camilla made a statement in a bright green dress and coat by Bruce Oldfield. The outfit was complete with incredible floral embroidery and matched perfectly with her Philip Treacy hat.

— The Prince of Wales and The Duchess of Cornwall (@ClarenceHouse) June 8, 2019

Catherine on the other hand turned heads in a yellow Alexander McQueen dress. The bright number matched perfectly with her yellow fascinator by Philip Treacy – which she wore over her brunette locks.

And while royalists have been waiting for another glimpse of baby Archie, he unfortunately did not attend this year’s event with his family.

2019 marked Queen Elizabeth’s 69th time attending Trooping the Colour. The event is a celebration of Her Madjestry’s birthday – even though she was actually born on April 21. It’s traditionally held on the second Saturday of June and is one of the most spectacular and highly anticipated days in the royal calendar.

Various members of the royal family travel in procession along The Mall, from Buckingham Palace to Horse Guards Parade and back again. the event includes a military parade and the chance for the Queen to inspect her personal troops – the Household Division – on Horse Guards Parade in Whitehall.

Her Majesty The Queen inspects her Birthday parade. #TroopingTheColour is one of the nation’s most impressive and iconic events – a display of soldiers’ physical prowess and discipline. @RoyalFamily @BritishArmy pic.twitter.com/wq4k7YYeNo

After the parade, members of the royal family stand on the balcony of Buckingham Palace to wave to the crowds and watch the spectacular RAF flypast.

A magnificent flypast from @RoyalAirForce and @rafredarrows to mark the end of The Queen's official birthday parade 2019.
📷 PA Images pic.twitter.com/OVHuR5P71y

Are you glad to see Meghan back in the spotlight?