Ever wondered why you itch? Now we finally know what causes it 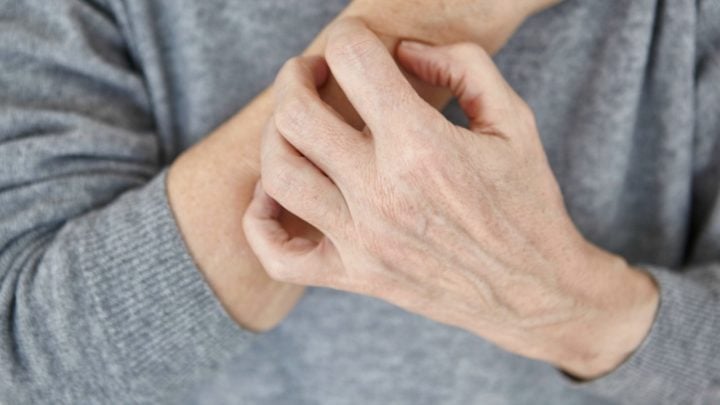 It’s something most of us battle without a whole lot of thought on a daily basis, but itchy skin can truly plague some people – and now we may finally have an answer to what causes it.

Researchers have dug deep into the mystery around how the feeling of an itch forms – and exactly how neurons in the spinal cord help transmit the signals to the brain in the first place. They ultimately hope the findings will help lead to new drugs to treat chronic itch – common for eczema, diabetes and even some cancer sufferers.

Publishing the findings in the Cell Reports journal, Salk Institute researchers found unlike other touch sensations, an itch actually has a specialised route through the spinal cord. Salk Professor Martyn Goulding, senior author of the new work, explained: “The takeaway is that this mechanical itch sensation is distinct from other forms of touch and it has this specialized (sic) pathway within the spinal cord.”

Goulding’s team previously discovered a set of neurons – which produce the neurotransmitter neuropeptide Y (NPY) – that act as cellular brakes in the spinal cord, essentially stopping anything passing along the itch pathway most of the time. However, without them, it is constantly open and can result in chronic itch.

Researcher David Acton came up with the theory that when the NPY neurons are missing, other neurons in the spinal cord that normally transmit light touch begin to act like an accelerator stuck in the ‘on’ position. He found a population of excitatory neurons – named Y1 – and testing whether they indeed act as an accelerator, Acton selectively got rid of both the NPY ‘brake’ and Y1 ‘accelerator’ neurons on mice. He found without the Y1s, the animals didn’t scratch at all – even when touched with stimuli that should have made them itch.

To hammer home the point, when he gave the mice drugs that activated the Y1 neurons, they began scratching even without stimuli. The team eventually found that NPY signalling actually controls the level of Y1 neuron excitability.

According to previous research, psoriasis sufferers lower than average levels of NPY which may explain why they itch more than other people – there’s no ‘brakes’ on the Y1 neurons.

“By working out mechanisms by which mechanical itch is signalled under normal circumstances, we might then be able to address what happens in chronic itch,” Acton said. The team admitted more work will need to be done however to look into other neurons responsible for mediating the final response in the brain.

Meanwhile it comes after experts warned older people to pay more attention to their wounds and small scratches – given they’re more at risk of small injuries turning into chronic wounds than other age groups.

Each year in Australia, $3 billion is spent on wound treatment in hospitals and aged care facilities, with more than 500,000 Aussies suffering in silence daily because of chronic wounds. While surgical wounds, small cuts and bruises may seem like a normal part of daily life, many factors put older people at risk of these wounds becoming more problematic.

Professor Fiona Wood, director of the Burns Service of Western Australia, 2005 Australian of the Year and Wound Awareness Week ambassador, treats burns victims daily and knows all too well the importance of acting quickly when a wound first appears.

“When we get over 60, burns aren’t anywhere near as easy to deal with,” she told Starts at 60. “Even small burns and injuries of the skin can have a really profound impact. As we get older, those cuts and bruises can turn into a chronic wound all too easily – especially on the lower leg, especially in a situation where you’ve got diabetes, if you’re a smoker or if you’re overweight.”

The skin has more difficulty healing as we grow older because it becomes thinner and the immune system that assists in the healing process slows down, while health issues including diabetes and vascular disease can also impact it. This means a small graze or cut that would’ve healed within a week when we were younger can take much longer.

Do you suffer from itching? Did you know what causes it? Have you found any good remedies?