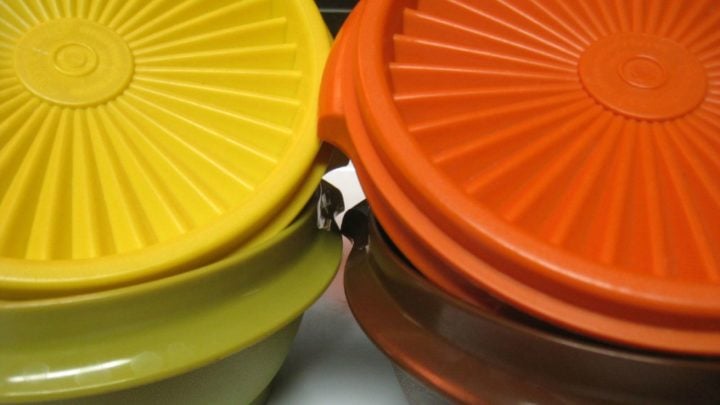 Colourful Tupperware that was popular in the '70s may be harmful for health, a leading expert has warned. Source: Shutterstock

For anyone who grew up in the 1950s, ‘60s or even ‘70s, brightly-coloured Tupperware was likely a fixture in your kitchen. Whether it was used to store tasty snacks or keep food as fresh as possible, there’s every chance that the Tupperware you used decades ago still has a home in your kitchen.

Your mother or grandmother may have even hosted Tupperware parties, where they’d sell Tupperware goods with friends, family members and others in the neighbourhood. For other families, nothing was more exciting than a trip to the department store to purchase new Tupperware.

One expert is now calling on people to stop using their vintage Tupperware immediately after she discovered measuring cups from 1972 actually contained lead an even arsenic. While she originally wrote the article in March, it’s since gone viral on social media.

Lead can cause an array of health issues including damage to the brain and nervous system, high blood pressure, kidney failure, and poisoning of the bones, teeth and other vital organs. Meanwhile, arsenic has been linked to the development of diabetes, cancer, vascular disease, heart disease and lung disease.

Writing for her blog, independent advocate Tamara Rubin – who began testing consumer goods for toxins 10 years ago – used an XRF instrument to measure toxins in Daffodil Yellow vintage measuring cups and found unsafe levels of lead and arsenic, as well as other metals including zinc, nickel, iron and titanium.

Tests were carried out multiple times and Rubin warned that even when items were made in countries such as the USA, it doesn’t mean they are automatically free of lead. Her advice is to dispose of vintage Tupperware such as the yellow measuring cups or for people to not use them until they contact the manufacturer to ensure they’re safe for use.

“Of additional concern is that many of these vintage Tupperware pieces have been kept in regular daily service for their 40+ years of life and may have considerable wear and deterioration as a result of decades of heavy regular use,” she wrote.

“So even if they were not leaching at the time of manufacture they may be leaching now – four or five decades later.”

In a separate post, Rubin said that retro measuring cups that are made of solid white plastic with no painted markings or decorations didn’t test positive to lead or arsenic. Meanwhile, other colours of Tupperware were found to contain potentially dangerous chemicals such as cadmium (which can damage the lungs, kidneys and bones) and mercury (which may impact the digestive and immune systems and other vital organs).

The news has come as somewhat of a shock for many in the community, with one person on Facebook writing: “I use mine just like these almost every day for 40 years!”

Another comment read: “I replaced mine with stainless steel ones many years ago!” while a third added: “ I have so many containers I use for oatmeal and flour…time to switch.”

Of course, Tupperware wasn’t just found in the kitchen, with an array of products including containers, toys and utensils taking the world by storm. It’s still around these days, although most items go through more testing before they go on sale.

If you are concerned that the Tupperware you own may be impacted by harmful chemicals, seek advice from the manufacturer.

Do you use vintage Tupperware? Are you concerned they could be impacting your health?