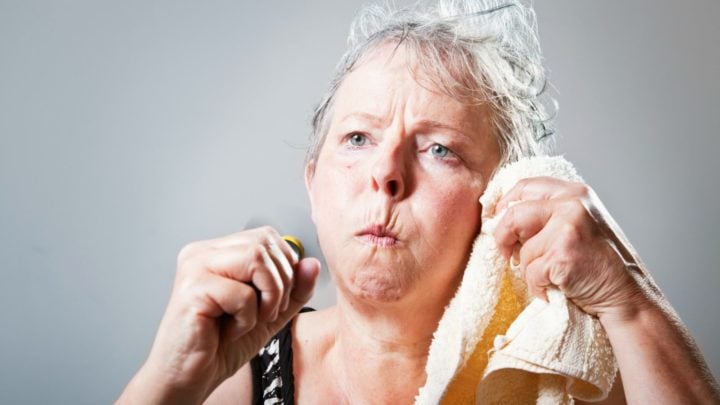 Hormone replacement therapy isn't available to all women with menopausal symptoms such as hot flushes and mood swings, but new research claims acupuncture can be an effective way of reducing the severity of symptoms. Source: Getty (stock image used)

Hot flushes, mood swings and restless nights are common in women experiencing menopause, but researchers have discovered an existing alternative treatment that could help relieve symptoms.

While many women already opt for hormone replacement therapy (HRT), Danish researchers have discovered acupuncture could work as an effective alternative for women who can’t use HRT or simply don’t want to.

The research, published in the BMJ Open Journal, found a brief course of acupuncture could help ease menopausal symptoms including hot flushes, sweating, mood swings, sleep disturbance and skin and hair problems. The benefits were particularly rewarding for women with moderate to severe symptoms and saw reductions in hot flushes, excess sweating, mood issues, sleep problems and issues with hair and skin.

Women who experience menopausal symptoms know they can impact their quality of life, health and wellbeing and productivity, with hot flushes often impacting women for years. Other symptoms women are known to experience include heavy sweating, emotional vulnerability, sleep disturbances, fatigue, joint pain, vaginal dryness and a reduced sex drive.

While hormone replacement therapy and other medication on the market can treat symptoms, they often come with side effects. Unfortunately, there isn’t convincing evidence that non-pharmacological approaches such as exercise, relaxation, herbal and dietary remedies relieve symptoms, according to researchers. Previous studies have analysed the effectiveness of acupuncture, but design flaws and quality issues have hindered these studies.

As such, the new research randomly allocated 70 menopausal women who underwent either weekly 15-minute sessions of acupuncture for five weeks, or no acupuncture until after six weeks. Each participant also completed a questionnaire designed to measure outcomes from their perspective. The first questionnaire was completed after the first session, then again after three, six, eight, 11 and 26 weeks.

And, compared with participants not given acupuncture, women reported significantly less troubled hot flushes – so much so they noticed changes after just three weeks. Significant changes were also reported when it came to the severity and frequency of day and night sweats, general sweating, sleep disturbances, emotional and physical symptoms and skin and hair problems.

Researchers acknowledged that the treatment period lasted just five weeks and that a major difficulty in all acupuncture trials is the lack of a proper comparator. They also pointed out that a placebo effect can’t be ruled out, but said the findings show that a brief course of acupuncture by suitably trained professionals is feasible in routine primary care for doctors and patients.

The research has been met with mixed response from others in the health profession.

“We know that psychological treatments like cognitive behavioural therapy (CBT) can be helpful, so the findings seems plausible, however it is difficult from the way the study was carried out to make any firm conclusions about how effective acupuncture is for the treatment of hot flushes,” Ali Abbara, Clinical Senior Lecturer in Endocrinology at Imperial College London, said in a statement to Scimex. “Whilst it is not a drug, acupuncture does still have a cost attached, and therefore it is important to be sure that this treatment actually works before we recommend it.”

He also pointed out that patients knew whether they were receiving the treatment or not, which could impact results. Meanwhile, Channa Jayasena, Clinical Senior Lecturer and Consultant in Reproductive Endocrinology at Imperial College London and Hammersmith Hospital, claimed because so many women can’t use HRT, there is a huge gap in the market for other therapies.

“The authors show that acupuncture can reduce flush symptoms. However, we also know that flush symptoms can more than halve with a placebo,” she said. “I suspect that most (if not all) of the effect of acupuncture is a placebo effect; but is that a really bad thing? Anything that is safe, affordable and helps the well-being of patients while reducing symptoms is worth considering if HRT is not an option.”

It’s always important to talk to a GP or health professional before exploring new therapies and treatments to ensure they are right for you.

Do you suffer with hot flushes and other menopausal symptoms? Have you ever used acupuncture to manage these symptoms?