Put down the bacon! Eating just one rasher linked to increased risk of dementia 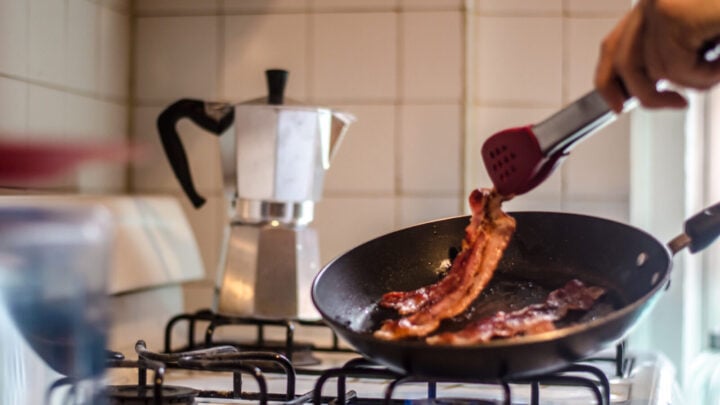 A study has found processed meat could raise the risk of developing dementia. Source: Getty.

Eating just one rasher of bacon a day could dramatically increase the risk of developing dementia, a new study has found.

Researchers found that consuming a 25 gram serving of processed meat a day, the equivalent of one rasher of bacon, was associated with a 44 per cent increased risk of developing the debilitating disease, a condition that affects an estimated 472,000 Australians. But unprocessed meat, such as beef, pork, or veal, was found to protect against the condition, with people who consumed 50g a day 19 per cent less likely to develop dementia.

The study, published in the peer-reviewed journal American Journal of Clinical Nutrition on Monday, looked at 500,000 British adults aged between 40-69, who had signed up to the UK Biobank project, to investigate associations between consuming different types of meat and the risk of developing dementia. The data included how often participants consumed different kinds of meat.

Among the participants, 2,896 cases of dementia emerged over the eight years covered by the study. These people were generally older, more economically deprived, less educated, more likely to smoke, less physically active, more likely to have stroke history and family dementia history, and more likely to be carriers of a gene that is highly associated with dementia. However, the study found that the risks from eating processed meat were the same whether or not a person was genetically predisposed to developing the disease.

Meat consumption has previously been associated with dementia risk, but this is believed to be the first large-scale study to investigate the link between specific meat types and amounts, and the risk of developing the disease.

Huifeng Zhang from the University of Leeds, who led the study, said: “Worldwide, the prevalence of dementia is increasing and diet as a modifiable factor could play a role. Our research adds to the growing body of evidence linking processed meat consumption, to increased risk of a range of non-transmissible diseases.

“Further confirmation is needed, but the direction of effect is linked to current healthy eating guidelines suggesting lower intakes of unprocessed red meat could be beneficial for health.”

Meanwhile, Professor Janet Cade, who supervised the research, said: “Anything we can do to explore potential risk factors for dementia may help us to reduce rates of this debilitating condition. This analysis is a first step towards understanding whether what we eat could influence that risk.”

Dementia is the second leading cause of death in Australia. Three in 10 people over the age of 85 and almost one in 10 people aged over 65 have dementia. According to Dementia Australia, without a medical breakthrough, the number of people with dementia is expected to increase to 590,000 by 2028 and 1,076,000 by 2058.

Do you eat a lot of processed meat?