Antidepressants and opioids double the risk of falls in older people: Study 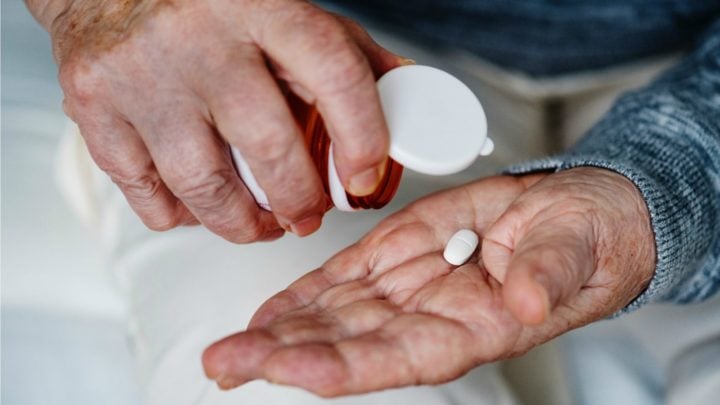 Aussies are among the highest users of antidepressants in the world and researchers say these medications could increase the risk of falls in older people. Source: Pexels

Suffering a nasty fall as you get older can leave many people suffering for years – with some never able to fully recover – and now a new study has claimed combining certain medications could increase the risk of taking a tumble even further.

New data shows taking antidepressants or opioids may more than double the risk of falls and hip fracture in the older population. Around 30 per cent of over-65s living in the community and half of all aged-care residents fall at least once a year and while many are embarrassed to talk about it because of fears of being judged or losing their right to live independently, their medication may be the reason behind it.

Research published in the Australian Prescriber Journal says medication is a major modifiable fall risk factor and in some instances, adverse reactions including drowsiness, dizziness, blurred vision and confusion increase the risk of a fall.

Australians are among the highest users of antidepressants in the world and 10 per cent of adults use psychotropic medications (those that affect the mind, emotions and behaviour) every day – a type of drug researchers are concerned about when it comes to falls. These medications are currently used to treat a range of conditions including depression, pain and dementia.

Researchers from the University of South Australia and the University of Adelaide investigated the role psychotropic medications play when it comes to people falling. It follows statistics which show 28,000 people over 50 were hospitalised for a hip fracture in 2018 and 5 per cent of those died in hospital. More than half of people who fracture their hip as a result of their fall experience a persistent mobility-related disability a year after their injury.

For the new study, researchers analysed data from the Australian Government Department of Veterans’ Affairs (DVA) to assess the impact selective serotonin reuptake inhibitors (SSRIs) and other psychotropic drugs had on the risk of falling. The study shows medications including antidepressants, opioids, antiepileptic drugs, benzodiazepines and antipsychotics all increased the risk of falls in older people.

SSRIs are commonly used to treat depression and are often prescribed with other drugs in older people. When SSRIs and anxiety medication benzodiazepines are taken together, the risk of a hip fracture increases five-fold.

“This equates to one extra hip fracture for every 17 patients aged 80 years and over who are treated for a year”, researcher Libby Roughead said in a statement.

Researchers believe the risk of fall needs to be assessed when benzodiazepine and SSRIs are taken together and that alternative painkillers can be used for patients who are unsteady on their feet.

“We suggest to prescribers they consider whether their patients really need some of their medicines any more – for example, an SSRI antidepressant may no longer be required if a patient is fully recovered from depression,” Roughhead explained.

The study also claims that while antipsychotics and antidepressants are commonly prescribed for elderly people with dementia, there’s a lack of evidence to show that antidepressants are beneficial in managing the cognitive condition. In fact, researchers say these medications may increase the risk of confusion and hypertension – both known to increase the risk of falls.

“Doctors should try stopping one medicine at a time and reducing the medicine slowly over weeks or months,” Roughhead said.

Similarly, other health interventions like exercise, occupational therapy or podiatry can also reduce the risk of falls. Exercises that focus on improving balance and building strength are particularly beneficial, while occupational therapists can improve home safety.

It’s always important to talk to a health professional or GP to assess whether medication is increasing the risk of a fall and the best way to reduce the risk.

Do you know someone who’s taken a fall? Do you think their medication could be behind it?