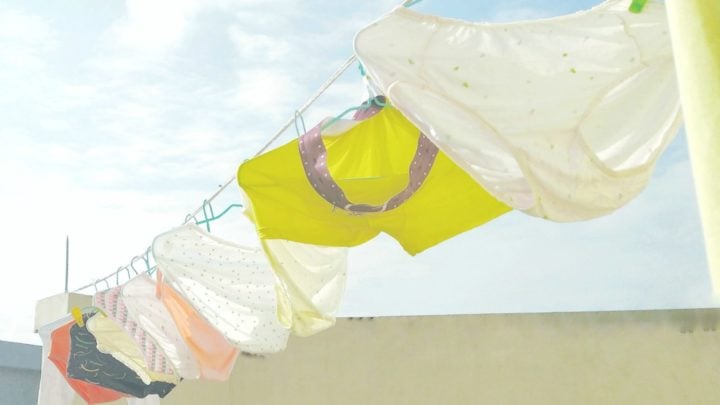 An alarming new study shows as many as 45 per cent of people wear the same underwear for two or more days without a wash. Source: Pexels

Underwear. Knickers. Boxers. Unmentionables. Whatever you call them, most people don’t feel comfortable talking about their undies, but if you’ve been experiencing problems in your nether regions, your underwear habits could be to blame. An alarming new study released earlier this month has raised eyebrows by claiming 45 per cent of Americans wear their undies for two days or longer without washing – potentially increasing their risk of infections and other serious health issues.

Apparel maker Tommy John surveyed 2,000 men and women to better understand the underwear habits and discovered some cringe-worthy facts about peoples’ downstairs areas. The survey found 46 per cent of people have had the same pair of underwear for a year or more and 38 per cent didn’t know how long their oldest pair of undies had been lurking in their drawers.

Men are 2.5 times more likely than women to wear their skivvies for a week or more and while 38 per cent weren’t sure how long they’d owned their oldest pair of undies, experts warn that cleaning underwear regularly doesn’t actually mean they’re clean.

Previous research released by The Good Housekeeping Institute found that underwear that’s been washed can still contain up to 10,000 living bacteria and that microorganisms and fungal germs including E. coli and dust mites can still flourish, increasing the risk of urinary tract infections, yeast infections, thrush and even allergies.

They added: “Women should be especially careful, as they’re more at risk than men to experience health issues due to unclean underwear.”

It’s recommended that underwear be tumble dried on low heat for half an hour after washing to minimise the number of bacteria that gathers in underwear after a wash. Similarly, underwear should never be cleaned with clothes of a loved one who is sick as this could increase the bacteria undies are being washed in, while avoiding washing with clothes that contain any other bodily fluids should also be avoided.

It follows alarming research released by bedding company Time4Sleep earlier this year which found failing to wash bed sheets regularly can cause a “genuine threat”. Leaving bedsheets, pillow cases or doona covers for 28 days between a wash increases the risk of harmful bacteria that can cause serious health issues such as appendicitis, cellulitis and pneumonia, while fusobacterium can cause skin ulcers, Lemierre’s syndrome and even gum disease.

In addition to bacteria, mites, silverfish and other bugs known to flourish in dirty bedding. These can cause issues for those with allergies and may even trigger allergic reactions. Bedding should be cleaned weekly and unhygienic bacteria can begin to take over in as early as two weeks.

How regularly do you change your underwear?