Busting the biggest myths about asthma 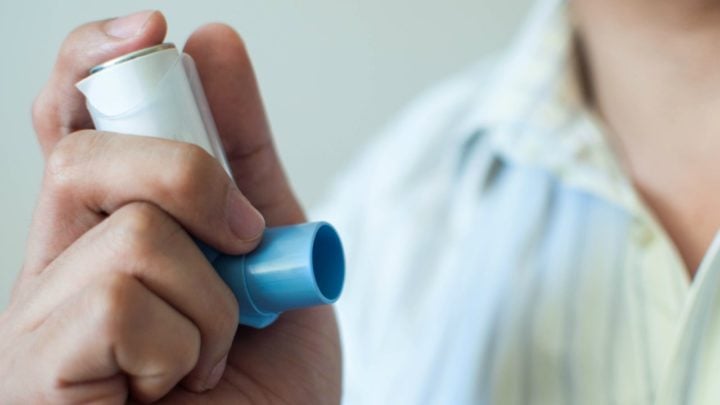 There's plenty of information available about asthma, but there's also a lot of myths. Source: Getty

If you’ve noticed more people coughing, wheezing or becoming short of breath with the recent change of season, you’re not imagining things. For 334 million people around the world, these seasonal changes may be impacting their asthma – a disease of the airways that causes the muscles to tighten, an increased production of mucus and airway linings to become inflamed and swollen.

While asthma is a common condition that likely impacts you, a family member or someone else you know, it’s still one that boggles the mind of experts. Michele Goldman, the CEO of Asthma Australia, tells Starts at 60: “Despite all the research that’s been done over the years, we still don’t really understand what exactly causes it and we don’t have a cure.”

Most people are aware that the environment, lifestyle factors and even genetics can play a role in whether or not a person can develop asthma and with a myriad of information available, Starts at 60 is busting some of the biggest myths surrounding the chronic inflammatory disorder.

All people with asthma developed it in childhood

“There’s a myth that asthma is a childhood disease. Contrary to that, asthma can develop at any age and in fact, many older people only do develop asthma later in life,” Goldman explains.

So while it’s more common for people to first experience asthma symptoms when they are children, they could experience an asthma flare-up for the first time much later in life, which is why it’s important to know that chest tightness, wheezing, coughing and mucus are all signs of asthma and need to be treated seriously.

In Australia, around 12 per cent or one in eight people over the age of 65 currently lives with asthma.

An ambulance should always be called as soon as possible if anyone with asthma is struggling to breathe, if they’re unable to speak properly or their lips are turning blue, if they’ve been using their reliever inhaler but their symptoms such as coughing and wheezing aren’t improving, if they become dazed or confused or if they’ve collapsed.

While exercise can certainly trigger asthma and cause a flare-up in some people, it’s not an excuse for people not to keep active. According to the National Asthma Council Australia, people with asthma should still aim to do 30 minutes of moderately intense physical activity most days of the week.

This can include brisk walking, gardening, water aerobics, dancing or cycling. It’s always important to have your reliever medication handy in case of a flare-up, avoid exercising in areas with known triggers such as pollution and try to exercise in warmer or humid locations.

The European Lung Foundation recently found that non-obese people with asthma can reduce their asthma symptoms and improve their quality of life through both diet and exercise, but that they need to participate in well-planned exercise regimes. If you’re unsure if physical activity is appropriate for the type of asthma you experience, talk to a GP or health professional as advice will vary from person to person.

All asthma medication works in the same way

Preventers are taken daily to reduce the risk of a flare-up or attack and are commonly prescribed to people who experience symptoms more than once a month, who have had an attack or flare-up in the last 12 months or have been hospitalised with their asthma.

“You’ve probably been put on that preventer regime because you’ve had visits to the hospital or urgent doctor visits because you’ve been experiencing symptoms and flare-ups,” Goldman says.

Relievers on the other hand aim to reduce asthma symptoms quickly by relaxing the muscles around the outside of the airways. This medication is often taken by all people who experience asthma, but is only taken when a person notices symptoms.

“They’re not doing anything to reduce the underlying inflammation and after a few hours, the effect of the reliever wears off,” Goldman explains.

There are also combination therapies such as Symbicort which combines reliever and preventer medication to reduce inflammation and symptoms. The TGA recently announced Symbicort could be used for people with mild asthma, as well as those with moderate or severe cases.

Only dust and pollen cause flare-ups

“Unfortunately there are hundreds of different things that can trigger asthma and many common triggers,” Goldman says.

A trigger is anything that causes sensitivity in the airways and while dust and pollen cause flare-ups, it can also be caused by dust mites, smoke, exercise, hay fever, mould, thunderstorms and even colds and flus. In winter, viruses become a particularly big problem for older people with asthma and increase hospitalisations, which is why it’s vital to have the flu shot in autumn for the ultimate protection.

“Even if they did get a cold or a virus, hopefully they’ll have a milder form of it, meaning there would be less severe trigger for their asthma,” Goldman explains.

Allergies tend to flare-up in spring which can also be detrimental for people with asthma, so it’s important to manage and control allergies and to talk to a health professional about ways to keep these symptoms at bay. Similarly, bushfires and smoke in summer can trigger asthma, but both Asthma Australia and the Royal Fire Service put out warnings when there’s hazard reduction burns to help people with breathing difficulties.

“If you know something is a particular problem for you, make sure you’re monitoring what the levels of that are in the environment and avoid being unnecessarily exposed,” Goldman adds.

Do you have asthma? How do you manage flare-ups?