Your final celebration: burial, cremation and other end-of-life options for modern Australians 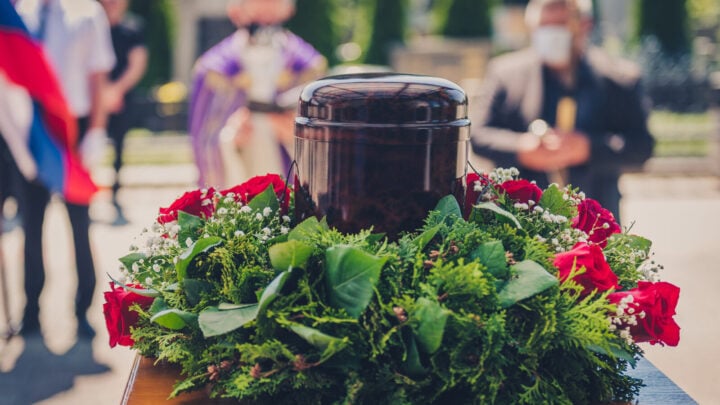 Funerary urn with ashes of dead and flowers at funeral. Image: Getty

Death is something no one enjoys thinking about but that we will all go through some time for both our loved ones and ourselves, so understanding your options when it comes to your burial, cremation or disposing of your body in other ways remains important to everyone.

Approximately 170,000 people die in Australia each year, and approximately 54% are cremated while approximately 30% are buried in a cemetery – leaving nearly 26% of people to consider other options for the handling of their bodies.  Do you understand your options?

To help you, Starts at 60 has had a chat with Lynne Gallucci, Executive General Manager for Australian Funerals at Invocare, to work out what your options really are, after your time is up.  We explored all the common options for end-of-life handling of your body, gaining some insight that might be helpful for choosing a more modern approach to your death.

And, if you’ve recently lost a loved one, consider this helpful article on handling grief.

A traditional funeral and burial process usually begins with a funeral ceremony, often held in a church or funeral centre chapel.  Then, your body is commuted to a cemetery via a herse where it will be buried in a pre-booked cemetery plot.  Burial in a cemetery is still preferred by almost 30% of Australians.  And there’s plenty of options for coffins, with many now considering a raft of recyclable and decorable options.  There can be a viewing of the body for family members and loved ones a day or two before the funeral too.

The traditional funeral and cremation process is similar to that associated with the burial, but the service is usually held in a venue associated with the funeral company where the coffin is presented for viewing before sliding back into creation after the service.  The chapel in funeral centres usually has a priest that is non-denominational or can call upon a celebrant from specific faiths.  And the family and loved ones can play as large a role as they might like in the ceremony.   Traditional service+cremation is currently the most popular form of end-of-life treatment for Australians, with 54% choosing cremation of some form.

An end of life celebration and cremation

Increasingly more common is the fact that people don’t really want to have their funeral held in a funeral centre or chapel with its sombre mood and are increasingly recognising that end of life is an opportunity for celebration.  In this case people are embracing separation of the celebration from the cremation process, organising a party at their home, garden or in a joyous venue of their choosing and having the body created as a simpler ‘cremation-only’ process.  It’s not very commonly talked about but it is something that is readily available to you through most cremation companies if you ask.  You might also consider prepaying for your cremation earlier in life if this is your chosen approach, as you can lock in the cost of the cremation at today’s dollar knowing that your family then will only need to be focused on the party and celebration itself.

Water cremation, or liquid cremation are umbrella terms that encompass a variety of different processes that your body would experience, in the process of being broken down. Lynne shared that the exact term used was dependent on the type of chemicals and the heat of liquid used to decompose the body. While this sounds very graphic, Lynne shared that it is a beautiful way to go.

If you could be melted down into a liquid and poured onto your favourite houseplant, would you be interested? While it might sound like something out of a true-crime documentary, the process involves placing a body in a large stainless-steel container that gently fills with water and an alkaline solution. The container is then heated for approximately four hours until only liquid remains. The remains are then given to the family in an urn, similar to cremation.

This alternative to cremation is also known as alkaline hydrolysis or aquamation and is a relatively new technology that is currently available to families from Victoria, New South Wales, the Australian Capital Territory, Queensland and South Australia. It’s being heralded as a more eco-friendly burial alternative, which produces less than 10 per cent of the carbon emissions of fire cremation. Water cremation also produces much fewer carbon emissions than a standard burial.

If being melted isn’t your cup of tea, how about being frozen by liquid nitrogen and shattered into a fine powder? This one is still a conceptual idea developed by Swedish biologist Susanne Wiigh-Mäsak, who derived the name from the Italian word for “promise”. The concept behind promession is to freeze bodies using liquid nitrogen. Once frozen and brittle, the bodies are shattered by a short ultrasonic vibration until the body is reduced to a form of powder that is then packaged into a box or urn.

The concept has faced some resistance in the US after a judge in Kansas ruled that it didn’t fit the legal definition of cremation and hence wasn’t legal. Despite this ruling, Promessa Organic, the company behind promession, hopes to secure a full launch in America by 2025, though there’s no word yet when Australians can enjoy the unique technology.

The Promessa Organic website promises a raft of benefits if this alternative is legalised, including reducing your carbon footprint, offering a positive benefit to the Earth, and eradicating Covid-19 and SARS viruses from your remains.

Lynne shared that the idea of green burial is growing in popularity, as it is a nice way to memorialise yourself or loved one.

Spending your final days resting on your own land is a dying wish for many, and it is a possibility if you meet the eligibility requirements. These are a little more tricky to organise and you will need to ensure you go through the correct avenues to meet the legal stipulations.

To bury a body on private land, you need to get the relevant approvals, and the property you wish to be buried on must be larger than five hectares. The council will usually survey the land and will not allow burial in an area where it has the potential to pollute a domestic water supply. Home burial does allow you the option of going chemical-free — meaning you won’t be embalmed — however, there are more restrictions on the depth of the grave if you choose this option.

The rules are different for each state, with NSW and SA requiring approval from the local authority, while in Victoria an application must be made to the Health Department. Check with your individual council for more information.

Speaking with Lynne, this seems like a far fetched alternative, as state governments really don’t like the idea of people being buried on their own land, as it makes selling property quite difficult later on, however, there can always be an exception to the rules.

Burials at sea are also a possibility but are regulated by the Department of Agriculture, Water and the Environment (DAWE), and are usually quite expensive. You will require a sea-dumping permit, and the body must be in a heavy shroud and not a coffin.

Getting a Sea Dumping permit to bury a loved one at sea is a little trickier than a home burial. Generally, permits will only be granted to those with a demonstrated connection to the sea, such as long-serving navy personnel or fishermen. If you’re hoping to have your remains buried at sea, the DAWE website recommends making your wishes known in your will, which allows your family to provide sufficient justification for such a burial.

The burial location itself must not conflict with other marine users and must be at a depth greater than 3,000 metres, which means it is often located a long way offshore.

Due to the number of regulations and public safety concerns at play in this type of burial, Lynne shared that there were usually less than 20 sea burials per year across Australia, and that most sea burials held were permitted to take place, as the family and friends fo the deceased could prove a longstanding relationship with the ocean. Something to think about, for sure.

If the above ideas are a little too out-of-the-box but you’re still looking for a way to show off some final creative flair, a man in New Zealand has exactly the option for you. Auckland-based Dying Art was established in 2003 by Ross Hall, who wanted to offer custom, colourful coffins. Hall provides customised casket services to help family and friends celebrate the life of their loved ones in a truly personal and unique way. From firetruck caskets for retired firemen to nautical-themed yacht coffins, there’s no doubt your final day above ground will be memorable.

Lynne recommends personalisation of your service, and casket as much as possible. She shares that this isn’t for your benefit, but for the benefit of the bereaved, as it allows your loved ones to say goodbye to you in their own way, and in a way that resonates with the kind of person you were, throughout your life.

While cryonics is one of the most popular alternatives to regular burial in the movies, Lynne said this really isn’t that popular, nor realistic. Lynne shared that while this feels like a “futuristic” alternative to burial, it’s been around for at least 50 years, and hasn’t really changed since its inception.

That being said, if you do love the idea of one day coming back from the dead, this method might be for you! Straight from a sci-fi movie, cryonics involves freezing someone without damaging any tissue, in the hope they can one day be revived using future medical technology. While the logistics of reviving someone are still being researched, an Australian company called Southern Cryonics is working to open a facility that will be able to house up to 40 bodies at a time for 500 years into the future. The opening has been delayed due to Covid-19, but they hope to launch the facility later this year. Once completed, Australia will become just the third country in the world where bodies can legally be frozen. All you need to do is fork out a cool $150,000 to sign up for a post-death deep freeze.

Have you contemplated how you would like your body to be handled when you die?

Will you be opting for a traditional burial or something a little more unique?