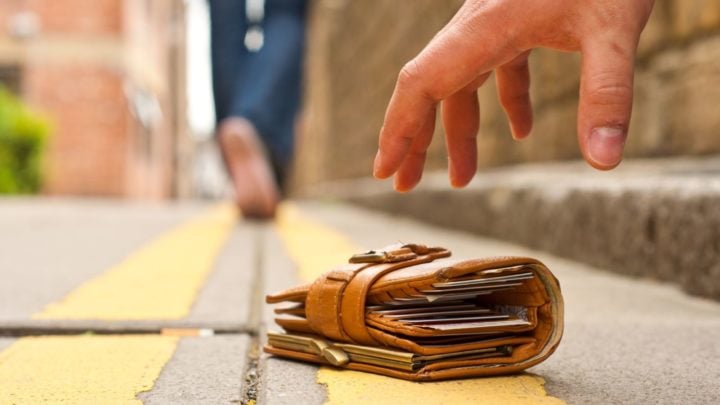 Ever found a lost wallet or purse on the street and tried to find the owner? Source: Getty Images

Have you ever found something that wasn’t yours and you set out to find the owner? I have. I recall several stories where I returned missing items to people and it made me feel very good about myself.

We were young with two children in the 1980s and my husband drove a truck for a well known transport company. Every Thursday, the pay was handed to each employee in a brown envelope. Times were hard; we were trying to save for a house and paying rent and food and petrol.

On Thursday night my husband put his pay packet on the table and went to get a beer. I opened the envelope, as I kept a record of our bills against his income, and screamed. He came running to see a stash of notes on the table and could not believe his eyes. We couldn’t figure out where that amount of money had come from.

After a restless night we knew what had to be done and next day he took the lot to the woman in the pay office. She began to cry. She had placed the pay amounts for two employees in one envelope and then had not been able to find the missing money. He was called into the office and was told how an honest person he was. His reward was a gold-framed certificate outlining why he’d received such an award. I still have it today.

On another occasion, my young daughter found a credit card at Wynyard station in Sydney. We looked up the person’s name and sent the credit card back to them. In return, my daughter was sent a Barbie doll.

I have found two mobile phones, one in the markets another one in the shops. By ringing numbers and speaking to people who were on the call list the owners were found.

I’ve also been sitting at a table in a shopping complex having coffee and heard a constant beeping sound. When I turned around the ATM behind me had a wad of money sticking out of it. No one else took any notice, so I took the money and went to the owner of the coffee shop and told him what occurred. He said I could leave it with him and if anyone came asking he would give it to them.

I went back the next day he had put it in an envelope. He counted $300.

There was a bank outside the centre and I went there to speak to someone about this money. When I told one of the staff my story, she put her hand out and said she’d take care of it. I handed over the envelope and she went about her business. I was disappointed that she didn’t care enough to get my name or to thank me, but I still feel I did the right thing. Finders are not keepers in my books and honesty is the best policy!