The perfect storm upset my teacup 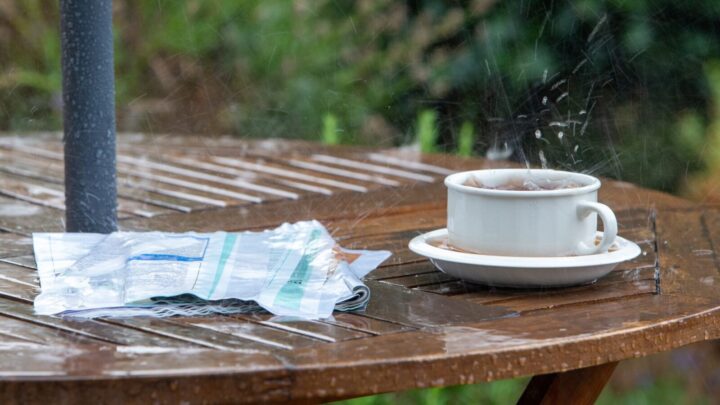 The forces of climate change and the anger of Mother Nature created the perfect storm. Source: Getty

We’ve had a rough time of it lately in Brisbane, Queensland. Not as tough as some in Northern New South Wales-referring specifically to the horror of February 28-but nevertheless, the violent storms have been unnerving, frightening and catastrophic in some areas.  Though my suburb fared well in comparison; sadly, I did not.

I am one of those “most vulnerable” everyone purports to clammer to assist.  I am 70-years-old, housebound with stage four lung disease, heart failure and oedema. I’ve had to give up driving because it hurt, and admit I need help in my daily activities. To live alone was my choice as my horrendous cough could wake the late Van Winkle himself.

I chose a tiny bedsit but I run it very efficiently with help from family and a home aged care provider.  I combine pre-made frozen meals with a freshly cooked assortment with the assistance of helpers, who also shop for me. We run a tight ship, always making sure I have backup supplies, particularly of tea.

Tea is my nectar, tea is my go-to fixer of all that ails.

My helpers usually come three times per week, for two hours, each day.  However, on February 17 when I am feeling unwell, I cancelled my services for the rest of the week, which had a concertina effect on shopping.  Paramount for me is that my helpers clean and dust because of my lung condition.  So, as priorities overtook my normal routine, I ended up consuming my backup
food supply. Not to worry though, my helper was coming on Friday, February 25 – I planned a big shop.

Covid-19 has been my nemesis from day dot but on this particular week, the virus, once again, played havoc with my life. The majority of helpers from my home care provider were either first contacts or had positive rapid antigen tests, all services were cancelled.

This did force me to address my now-bare fridge and pantry but, hey, any excuse for a takeaway. As I had $145 in my bank, I also made the brave move of deciding to do an online shop and have it delivered; a total of $137, but I was out of tea and the cupboards were bare.

The “all going pear shape” began on Saturday, February 26. As the rain continued pelting down, the thunder roared and the hail smashed everything in sight.  Needless to say, my delivery never came.  Frantic calls to the supermarket chain assured me it didn’t matter because they would give me a full refund – in about three to five days.

I don’t own a credit card and now I have $8 in my account. Okay, don’t panic, I tell myself. My daughter tried to put money in my account but this will take at least two to three business days.

The day was at an end but the rain just got worse. Friends and family offered to deliver food and TEA but I refused to put anyone at risk just so I could have a cuppa, plus everyone was sure it’d be over once morning came.

Sunday, February 27, was as dirty a day as memory could recall.  I hadn’t slept, I was starting to feel hunger pangs and my last vestige of hope, my neighbour, had become anxious and flown the coup.  And still, the rain was relentless; hard, stinging, angry rain.

The phone rang with my aged care provider doing a “welfare check.”  My inside voice screamed with joy, my outside voice embarrassingly “begged” for tea, milk, butter, and bread-but if you can only get one item please bring me TEA, any tea.  No, she couldn’t get through to me; all the roads were flooded; she just wanted to know I was physically safe.

A rummage in the dark recesses of the pantry and fridge unearthed half a packet of pasta, two tins of corn kernels and half a bottle of pasta sauce; right, that’s dinner sorted.  It was only 10:30 am; I was staring down the barrel of a long day, a very long day; with no tea. I rang the Brisbane City Council, Church and community groups, even my local member; nobody could help me.  Now I began to realise I was on my own; there would be no cavalry.

Monday, February 28, I was feeling very sorry for myself as I sipped my cup of hot water and turned on the television. Brisbane was in flood crisis, the river was chocka with crashed boats, pontoons, a wayward crane; people missing. The Northern Rivers area of NSW was an appalling sight. Men in tinnies rescuing citizens, tearfully begging “We need help. Where’s the SES and the ADF?”

I was stunned, shocked, overwhelmed but the rain was now monsoonal, almost cyclonic.  My heart broke and tears fell as I realised the terror these folks had endured.

I felt ashamed as I watched the alarm, the restrained panic and the complete exhaustion in their faces. I felt ashamed at my carry-on for a few days of inconvenience, after all, for me it was just a storm in a teacup; for the population of the Northern Rivers sadly, the forces of climate change and the anger of Mother Nature created the perfect storm.