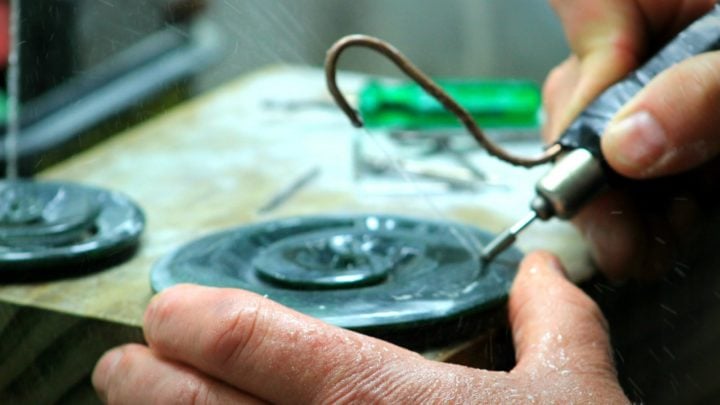 I worked for many years, including running a seven-day-a-week business with my husband. In August 2012, I was made redundant from my job and didn’t want to return to business seven days a week 24 hours a day (the phone would ring at all hours for bookings on our bus service).

I had made jewellery from päua, freshwater pearls and natural gemstones for around 12 years at the time of my redundancy, and had been selling at local markets. I had always wanted to turn my hobby into a business with the idea of it being my retirement project and found redundancy provided me with the perfect platform to embark on this adventure.

Throughout my life, I’ve enjoyed experimenting with many different forms of handcrafts. Since I’d been living on the West Coast of the South Island of New Zealand, I had wanted to learn to carve greenstone/jade/pounamu.

After I was made redundant, I’d applied for a couple of jobs and had been turned down. I realised my heart wasn’t in it to go back into office work. It was a realisation that came when I got a call from one of the firms and as soon as she said where she was from my heart sunk, I thought, “Are you going to offer me a job?” When she said I had not been successful, I sighed. It was not the sigh of missing out, but one of relief. I knew that was not the right attitude to have and I was ready to move on.

That same day I called into our local polytechnic and enquired about a course in jade and hard stone carving for the next year. After talking to the tutor, I knew it was exactly what I wanted to do. It was a two-year course, the first year for the certificate and the second for the diploma if I wanted to carry on.

I was so excited that first day. When we were told to get a piece of jade from the bucket and have a play with the grinding machines, I learned a valuable lesson … I’d put the piece to the machine and it had bounced straight back into my hand. “You have to be in control,” I recalled the tutor saying.

My first assignment was five freeform carvings, which allowed me to get to know the machinery. I did wonder what I was doing there, but my philosophy, especially with my children and their sporting pursuits, was ‘once it’s paid for, you’re in it for the year’ so I could hardly quit now. I achieved 72 per cent on my first carvings and I was very pleased. When the next assignment (asymmetical carvings) was due, I’d struggled just to get a pass. I knew I had to lift my game.

I failed the health and safety component on one assignment, shooting a stone (while I was drilling a hole in it) across the room and breaking a window. It was a relief no one was in the way as they would have been hurt. I had to do that section again, but it also meant I became very good at carving discs!

At the end of the year there was to be an exhibition at the local art gallery of our year’s work. Our tutor talked about each student at the exhibition. When he spoke about me, he said I’d learned the most as I’d broken the most stone. Oh yes, I had many ‘oh dear’ moments when I would push the piece and it would break, but I was awarded the most improved carver award. I also managed to just scrape through a merit pass (average 80 per cent). This left me with a total passion for jade carving and I committed then to achieving my diploma.

Over the summer my husband set up a basic studio with the help of my tutor. This was a double ended grinder with a 80 and 220 grit diamond wheel on, and a point carver being a drill press turned on its side. I also purchased an electric handpiece.

In 2014, I went back for the diploma year, which was more focussed on design. I loved learning and producing.

My studio is still basic, but I have more and better machinery to work with. I carve when I can and sell my products through a few galleries around New Zealand and at markets covering the top and central South Island.

We shut down our bus business in April and my husband and I are both now on NZ Super. I’m carving more and I travel around the markets between October and April, spending my weekends away from home.

My only regret is that I didn’t take the leap years earlier. I look forward to doing this for as long as my health allows me to.

Have you turned a hobby into a profession? Have you had to navigate being made redundant?