‘Double standards: Why do we object to smoking in public, but not vaping?’ 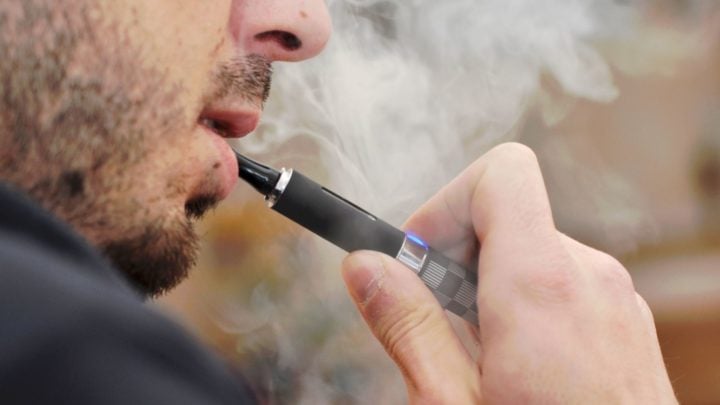 Following a recent incident with a man vaping on business premises, this writer was left scratching his head. Source: Getty Images

I first made mention of this recently in a private Facebook group I belong to and was encouraged to share my experience more broadly. I feel there are some important and potentially dangerous factors associated with vaping, not only for the direct participants but for others around them, not unlike smoking.

As I mentioned at the time, the last thing I want is to be considered a whinging old fart. Old I must accept with the best of grace. It’s a fact. But the rest …? Well, then, let me tell you about a recent incident and you can decide.

A friend wanted a couple of flower punnets advertised by a local Plants Plus and asked if I’d mind picking them up while I was out. I parked and walked into the nursery’s shop and reception section, passing through to the enclosed but unroofed outdoor display where they keep their plants. I stepped around the end of a 2-metre high rack of pots, right into a cloud of vapour. As I was breathing in, some of the vapour drew into my lungs, causing me to cough sharply, probably from a reaction with my silicosis.

A man stood there holding a vaping device in his hand. He’d just taken a draw and exhaled the cloud through which I walked. I excused myself and complimented him on presumably trying to give up smoking, wishing him well in his endeavour. At the same time, I found it entirely unreasonable that he should share his vaping with any and all around him, especially inside business premises. He glowered at me, saying, “Time for a trip to Specsavers, old man. We’re outdoors.”

I explained that I’d been compelled to breathe in an amount of residual particulate matter from his vaping: nicotine, monopropylene glycol, carcinogens and toxicants, probably including heavy metals, and that I preferred not to indulge. He responded, “Stiff sh*t,” gave a little shake of the head to his partner and turned away. You know, for probably the first time in my life, I felt like spinning a condescending smart*rse back around and punching his nose, but resisted.

Finding the requested punnets — and a few more! — I went inside to the checkout. Vaping Man — not then vaping — and his partner were browsing in the shop, so I made mention of the incident to the manager. He thanked me and said another customer had already made a complaint. He’d approached the man, explaining the practice will not be tolerated on the premises and he must depart the property before vaping.

An interesting point was raised. It’s 22 years since Tasmania brought in restrictive smoking laws, something acknowledged by Vaping Man. However — and to me it’s no more than a cop-out — he highlighted the fact there is no sign on the premises saying ‘No vaping’. Surely, though, any right-minded person would consider it effectively the same for vaping as for smoking?

I don’t think my action in approaching the man was in any way aggressive. Might have been different if I’d hauled off and jobbed him, which I felt like but didn’t. I admit, for me, the worst aspect was that I’d actually felt like doing it!

What do you think? Have you experienced a similar incident? How did you handle it, and what was the response from the other person?