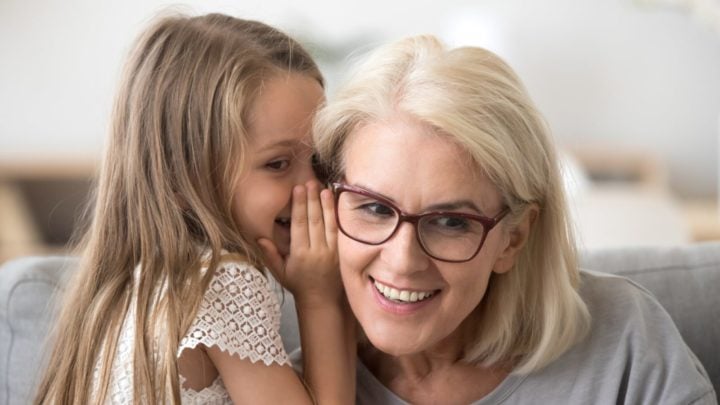 Kids have a unique view of the world and they aren’t shy in expressing their opinion. You’ve no doubt heard some of the most adorable or humorous statements uttered by the special little people in your life. Young children are also incredibly adept at being able to make harsh and occasionally insensitive observations and get away with it because, well, they are kids.

Earlier this year Starts at 60 asked you to share the cute, funny and sometimes inappropriate things that have come out of your grandchildren’s mouths and you were more than happy to share your stories. If you’re looking for something to make you laugh or brighten your day, read on. What follows are the adorable, hilarious and forever precious observations out of the mouths of your babes.

“I was looking after my grandson, Master Five, who told me he was hungry. I told him he could have a piece of fruit. His indignant response, ‘But Nan, that’s not a very good option!’ I didn’t even know he knew the word.” — Kerrie W.

“My little grandson was about five and we were taking him and his sisters for a walk around the estate where we were living. After walking for about 10 minutes, Master Five said, ‘How much further do we have to go?’ We said, ‘It’s a bit further’ to which he replied, ‘Couldn’t we go for a walk in the car?'” — Mitch P.

“My little granddaughter, not quite three, was waiting at the bus stop with her mother and a dozen other people. She is very talkative for her age. As she was chatting with a lady (who was probably in her 90s), said lady said to her ‘You’re a little chatterbox. How old are you?’ My granddaughter’s prompt reply: ‘I’m 3. How old are you?!’ There was fits of laughter from everyone waiting.” — Janina.

“My grandson wrote in my birthday card this little thought: ‘So you grew older. I really hope you last for another year. Love you Grandma and will really miss you when you are gone. Happy birthday’.” — Patty S.

“My four-year-old grandson and I were enjoying each other’s company one weekend when he turned to me and said, ‘Poppy, don’t have anymore birthdays’. I’m still trying to work that one out.” Steve S.

“My little granddaughter was four at the time and she said ‘Nana, when you grow up can you come with me to Possum Patch [the daycare she was attending]?’ I smiled and replied, ‘Okay Sweetheart’, not wanting to go into the specifics of how we age when we grow — older and not younger.” — Elizabeth T.

“I was helping my grandson, who was three at the time, to colour in an animal book. Halfway through I went over the lines and he said to me, ‘Poppa, for someone your age, you’re a messy colourer’.” — Paul E.

“I was accompanying Master Eight to his class and we were joined by one of his classmates. Master Eight introduced me to this beautiful girl. As we sat outside the classroom waiting for their teacher, I leaned over to Master Eight and asked, ‘Was that your girlfriend?’ He sat there, his solemn little face under his huge brimmed navy blue school hat and said, ‘Not yet Nanna’. He makes me smile every day.” — Carolina O.

“My four- and six-year-old grandchildren were cleaning the glass window for their dad. I suggested one go on the outside and one stay on the inside. Miss Four piped up and said, ‘Grandma, this is not our first rodeo’.” — Jan S.

“A lady friend of mine asked my Master Eight grandson, ‘What’s your name?’ He responded with his name, then ‘I have a brother … You don’t want to mess with my brother, he’s three and he’s got attitude!'” — Kerry C.

“When Tony Abbott was prime minister and Barack Obama was president, Pop was reading the paper and there were photos of the two men. My little grandson climbed on Pop’s lap and Pop explained who the men were and told him their names. My grandson’s father entered the room and told the little boy to stop bothering his grandfather. The little boy replied, ‘But Dad, I’m learning things. See, here is Tony Rabbit and Old Bummer’.” — Colleen C.

“I was playing the ‘Five-second Game’ with my grandchildren. ‘Name three newspapers,’ I said to Master Eight. ‘What’s a newspaper?’ he replied.” — K Avery.

“I have six granddaughters and five grandsons living with me. The older ones — aged between 25 and 13 — often joke that there is a change in everyone’s mood when it’s that time of the month. While driving the younger ones to school one day, Master Nine was talking about a certain teacher and how she gives him ‘the evils’ when she comes into the classroom. Master Eight chimed in ‘Yeah, we stop laughing when she is around and just stay serious.’ Then the youngest, Miss Seven, who is usually very quiet, piped up and said, ‘She must be on her period’.” — Bernadette T.

“A few years ago my grandson said to me ‘Nonna, your face is cracking’.” — Frances P.

“My three grandchildren were in deep conversation about ageing and other things that really matter. One says to me, ‘Peter, are you more than 70 years old?’ I replied that I was and that in another 29 years I would be 100. ‘How old are you?’ I asked the young fella. ‘I’m five,’ he said. ‘Well in another 95 years, you’ll be 100’. I asked the youngest, ‘How old are you?’ ‘I’m four and I’m old,’ she said. Then Master Five asks his other sister, ‘How old are you?’ She replied, ‘I’m eight’. Master Five then said, ‘Peter’s the oldest one here’ and Miss Eight said, ‘Yes, he’s 71’. Master Five then said, ‘Peter’s so old that it’s okay if he starts drinking and smoking now’.” — Peter G.

“I look after my sweetheart 2.5-year-old granddaughter once a week. I try to include her in deciding what we do together, so will often make suggestions like ‘How about we go to that nice playground down by the beach, then we can go to the shops. What do you think?’ Invariably, regardless of my suggestions, she pipes up with ‘Great idea Nanny, sounds like a plan!” — Norma K.

“Miss Four was planning an imaginary game and I was ‘in it’ with her. All the actions and dialogue was hers to command and I made a comment that didn’t quite suit her. Next thing I heard was, ‘Focus Grandma’. At least I can say that her father is being heard when he needs her to listen, as those are the exact words he says to her.” — Denise.

“My grandson, who was 10 at the time, once said, ‘If you want a manly decision made, ask my nanna’. I was quite impressed.” — Geraldine C.

“Precious moments, Miss Four was having a sleepover at my house, waking me at 6am with a gentle nudge and whispering in my ear … ‘Wake up Marsie, it’s tomorrow today!'” — Annette W.

“Many years ago my late husband, myself and our young granddaughter were playing patience. Granddaughter was getting a little bored and asked when the game would end. My husband told her, ‘When the fat lady sings’. We carried on playing the game and about 5 minutes later our granddaughter turns to me and says, ‘When are you going to start singing, Grandma?’ I was a size 14 at the time and thought to myself ‘Oh that God may give us the grace to see ourselves as others see us’.” — Wendy M.

“I collect my two granddaughters from school one day a week, bring them home, spoil them and then return them to their mother (my daughter) when she picks them up. One day, Miss Five cracked me up. Her mother had arrived all worked up and in a hurry to get home. Miss Five was taking her time putting on her socks and shoes. She didn’t want to go home. Even after her mother got cross with her it did nothing. I tried to hurry her along and Miss Five got quite annoyed. She turned to my newly wedded wife (my first wife had passed away) and said she had a secret to share with her. My wife goes to Miss Five, leaning in to hear her secret. She whispers, ‘Pa Pa is annoying’.” — Charles S.

“Master Three said to me ‘Nana, I don’t want to go to day care any longer. The girls all want to kiss me’. I’m sure that as he grows older his attitude might change.” — Annette L.

“My five-year-old grandson was asked by his teacher ‘What’s nine plus five?’ After thinking about the question for a couple of minutes, he responded with, ‘Why don’t we ask Google?'” — Kathy H.

“Visiting my lovely five-year-old granddaughter, she was playing in her room and we were having a little chat when she waved her hand and said ‘Off you go now’.” — Rosemary O.

“I said to my granddaughter one day that instead of calling her by her first name, I would call her ‘Sweetie’. ‘Oh good,’ she replied. ‘That means I’ll get a treat’.” — Lucia D.

What are the adorable, funny or inappropriate things your grandchildren say?