Half of Aussies with high blood pressure don’t even know they have it: Study 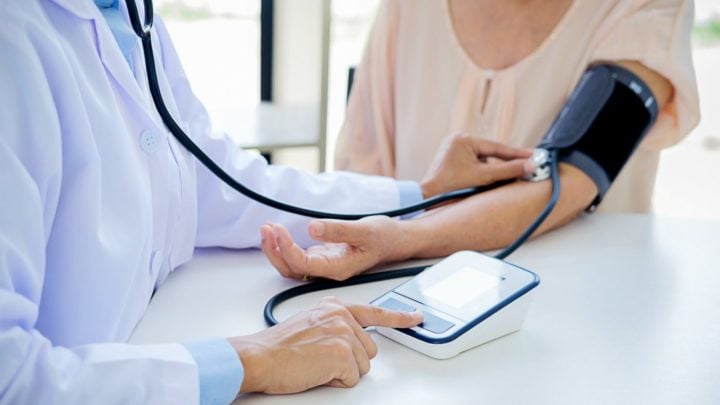 A new study has revealed just half of Australians with high blood pressure know they have the condition. Source: Getty

Half of all Australians living with high blood pressure are shockingly unaware of their condition, a new study has revealed.

According to scientists from The University of Western Australia (UWA) and the Royal Perth Medical Research Foundation, an alarming one in three Aussies suffer with the condition but just 50 per cent of those actually know they have it.

High blood pressure, or hypertension, is considered the biggest contributor to cardiovascular death and disease worldwide, affecting about six million adult Australians. It accounted for about 10.4 million deaths in 2017 and currently affects more than a billion adults globally with the figure forecast to reach 1.5 billion by 2025.

However the research, published in the European Heart Journal Supplements in conjunction with World Hypertension Day, discovered that a large proportion of people suffering with the condition have no idea they are affected by it, or that it could lead to more serious health conditions further down the track.

Of the 3,817 Australians involved in the study, 31.2 per cent were found to have high blood pressure with just 50 per cent admitting to having any knowledge of their condition.

This was a cause for concern for UWA Professor Markus Schlaich, who claimed some people may have never had their blood pressure checked.

“Even though effective treatments for this condition are widely available, only half of the people affected by it are being treated, and of those treated only 60 per cent are having their blood pressure adequately controlled,” he explained.

“This tells us that the majority of people who have high blood pressure may have never had it measured and are unaware of their condition.”

Schlaich said this is especially alarming as the condition could potentially lead to stroke, kidney or heart failure. The professor strongly encouraged people to get their blood pressure checked as part of this year’s World Hypertension Day.

“More than 2.7 million people had their blood pressure measured in May 2017 and 2018 and 150,000 people were found with undiagnosed hypertension,” Schlaich said.

“This year, we are hoping to take even more measurements and contribute to this global initiative and help the community.”

Read more: Toilet trips at night can be a sign of serious health condition: Study

The latest statistics follow the release of a study earlier this year which found frequent toilet trips at night could be a sign of hypertension.

The findings from researchers in Japan were presented at the 83rd Annual Scientific Meeting of the Japanese Circulation Society in March and analysed the link between nocturia and hypertension in the general Japanese population.

For the study, the blood pressure of each participant was measured and information on nocturia was obtained through a questionnaire. Those with blood pressure at 140/90 mmHg or higher and participants already prescribed antihypertensive drugs were considered hypertensive. Researchers noted getting up at night to urinate was associated with a 40 per cent higher risk of having hypertension