Know the warning signs: How heart attacks differ for women 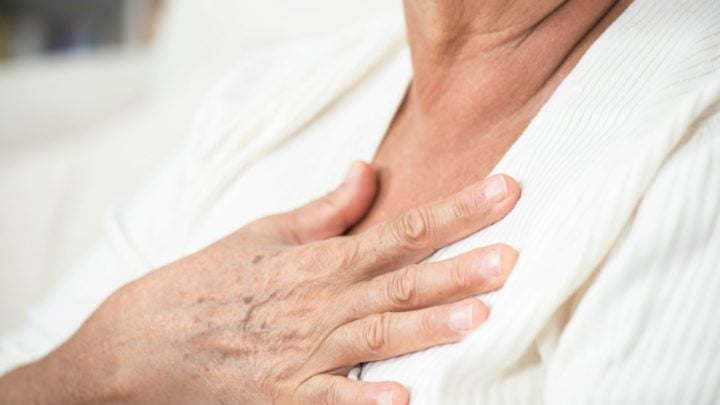 Heart disease is the leading cause of death for women in Australia. Source: Getty

Heart attacks are often associated with extreme chest pain and pressure, but that’s not always the case – particularly for women. In fact, most women who have a heart attack experience little to no symptoms.

Heart disease is the leading cause of death for women in Australia. In fact, nearly three times more women die of heart disease than breast cancer in Australia. And while women are generally considered better at addressing personal health concerns than men, recent studies have shown that when it comes to a heart attack this isn’t always the case.

Spanish research presented at the Acute Cardiovascular Care congress in April showed women call an ambulance for husbands, brothers and fathers with heart attack symptoms, but not themselves. It’s believed this is because many women don’t know that the symptoms of a female heart attack differ from a male heart attack and simply brush off the warning signs as common health gripes.

A women’s propensity to a heart attack increases after menopause with declining oestrogen levels believed to affect blood vessels around the inner layer of the artery wall. Oestrogen helps keep blood vessels flexible and depleting levels of the hormone can affect the vessels’ ability to accommodate blood flow to the heart.

If you do have a heart attack, recognising symptoms and seeking medical attention as soon as possible is vital to salvage heart muscle, prevent tissue from dying and ultimately prevent heart failure and death. According to Heart Foundation Australia, many of the signs and symptoms of a female heart attack aren’t obvious and women may experience one or a combination of symptoms.

Knowing these early warning signs and seeking medical treatment could be the difference between life or death.

Chest pain: Pain, difficulty breathing, pressure or a tight, constricted feeling or crushing pain in the centre of the chest.

Shoulders and back: Aching, pressure and heaviness in one or both the shoulders. In some cases, pain spreads from the chest to the shoulders. Some women may experience a dull ache in the middle of the back, between the shoulder blades.

Arms: Discomfort in the arms can range from numbness and tingling to pain or heaviness. Pain from the chest can also spread to one or both of the arms.

Neck and jaw: Aching or tight feeling in the lower jaw that will sometimes spread to both sides of the face. Some women will also experience a choking or burning feeling in the neck.

Do you know someone who has experienced a heart attack? Would you know the warning signs to look out for?