Dementia: Signs, symptoms and how to know when it’s serious 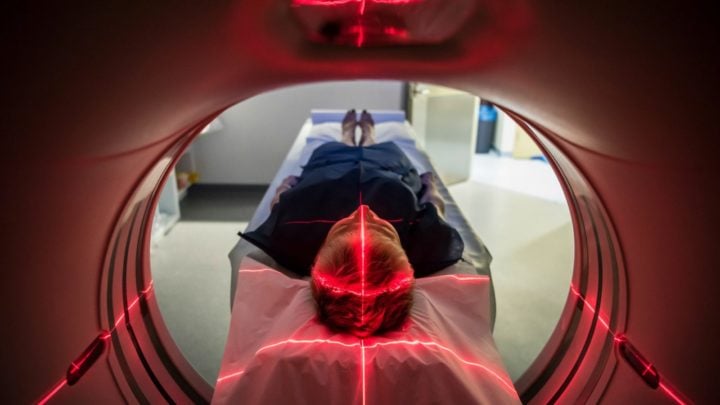 Health professionals may scan the brain as a way of properly diagnosing dementia. Source: Getty

It is estimated that 50 million people around the world are currently living with dementia, a term given to describe the collection of symptoms caused by an array of different disorders that impact the brain.

There are around 10 million new cases of dementia each year, causing disability and impacting a person and their family physically, psychologically, socially and emotionally. Alzheimer’s disease is currently the most common form of dementia, impacting up to 70 per cent of all people with dementia. Other forms include vascular dementia, lewy body disease and frontotemporal dementia.

Starts at 60 recently spoke to dementia experts about the cognitive condition to educate over-60s about dementia and how they may be able to spot it in a loved one.

What puts someone at greater risk of developing dementia?

While dementia can happen to anybody, it is something that is more common in older people particularly those aged over 65.

“Once over 65, the older you get, the greater the risk of dementia, with the likelihood doubling every five years,” Anthony White, head of Cellular and Molecular Neurodegeneration at QIMR Berghofer Medical Research Institute, told Starts at 60.

Still, it’s important to note that while it is more common in the older population, it’s not a normal sign of ageing. For others, particularly those who develop dementia at a younger age, a number of genes have been found to increase the risk of dementia.

“The Apolipoprotein E gene is associated with increased risk of late onset Alzheimer’s disease,” Muireann Irish, Associate Professor of Psychology at the Brain and Mind Centre at the University of Sydney, explained. “The recently discovered C9orf72 repeat expansion has been shown to be significantly associated with an increased risk of developing frontotemporal dementia, a younger-onset form of dementia. While a family history of dementia increases one’s risk of developing dementia, the majority of cases are ‘sporadic’, meaning they do not have a genetic link.”

In some cases, other age-related health issues including high blood pressure, heart disease, high cholesterol, obesity and type 2 diabetes can also increase the risk of dementia.

“It should also be remembered that being ‘at risk’ does not mean you will get dementia, even if you have all the above risk factors,” White said.

Along with confusion, personality changes, a lack of enthusiasm, withdrawal and difficulty completing daily tasks, memory loss can be a sign of dementia. Having said that, there’s a big difference between simply forgetting things and having dementia.

“Many people worry that they may be getting dementia because of simple memory loss that occurs with ageing,” White said. “Forgetting where you placed the car keys or your glasses, or struggling to remember someone’s name that you met once is a normal part of brain ageing. Dementia is very different as you gradually lose the ability to remember how to do things that you may have done all your life.”

For example, someone with dementia may forget how to cook a meal they’ve been making for decades or can’t remember the name of a person who has been in their life for years. Equally, a person with dementia may forget why they’re in the car driving, rather than forgetting where they left the keys. Many memory lapses in older age are actually down to insufficient attention rather than a true memory impairment, but concerns should still be raised with a health professional.

“Wondering whether we turned off the iron most likely reflects a failure to pay sufficient attention when we originally carried out the action,” Irish said. “In contrast, an individual with dementia may leave the iron on, having failed to encode the action of ever using it.”

What changes may family notice in a loved one with dementia?

Because dementia is more that forgetting things, there are an array of different signs family may notice in a loved one with dementia.

“Simply put, dementia is much more than simple memory lapses, and involves cognitive failures that significantly interfere with the everyday functioning of the individual,” Irish explained. “Often it takes a precipitating event that cannot be ignored, such as becoming lost or making an inappropriate financial decision, for family members to seek medical help, only to recognise a host of warning signs with the benefit of hindsight.”

Family members may also notice a change in a loved one’s personality, such as mood swings or becoming more withdrawn. Similarly, a loss of initiative or lack of interest in activities they once loved could be a sign of degenerative changes.

It important to remember this doesn’t always mean a loved one has dementia and a proper diagnosis from a health professional will be required.

Because there are many different types of dementia, it can take several different tests before a proper diagnosis. In most cases, people begin the process when either they or their loved ones notice worrying symptoms that could point to cognitive decline.

A GP is usually the starting point because they can examine a patient to ensure the symptoms aren’t the result of another health problem.

“The process starts with your GP, who will first see if there are other reasons that could be affecting memory, including anxiety, certain medications, or other illnesses,” White explained. “Sometimes the GP may order blood tests to see if there are any other issues.”

During this visit, it’s important to be honest about all symptoms and it’s common to be asked questions about daily life, memory, as well as to complete a series of tests such as a mini-mental state examination.

“That takes about 30 minutes and asks things like repeating a series of words, writing a sentence and identifying the date,” White said. “The score will help the GP to determine if there are significant memory changes.”

If the GP is concerned, the patient may then be referred to a specialist, neurologist or psychiatrist for further testing. In some cases, a scan of the brain may be used to pick up changes.

Is there a way to stop dementia?

Unfortunately, there is currently no cure to dementia and no intervention has been proven to halt the process. Having said that, there are lifestyle factors that may be able to buffer against some of the effects of dementia and potentially prolong quality of life.

For example, exercise and physical activity of at least 30 minutes a day may reduce the chance of developing dementia and slowing the loss of memory in those who already have it.

“This is due to many potential reasons but generally exercise seems to cause the neurons in the brain to grow stronger connections, which can improve the ability to recall memories,” White said.

Equally, maintaining a healthy diet is also important and reducing the intake of saturated fat can lower the risk of health issues that can impact dementia including diabetes, high blood pressure and obesity.

“We do not have enough information regarding the possible influence of diet on memory or overall brain health or whether dietary changes may help to ameliorate some of the symptoms of dementia,” Irish said. “What is becoming clear, however, is that many of the factors that we consider good for the heart are also good for the brain and by reducing the risk of cardiovascular risk factors, we may also reduce the risk for dementia.”

Equally, remaining socially connected and intellectually stimulated with hobbies or brain exercises could offer small benefit to those with dementia. Anything that requires the brain to learn something new can also help including puzzles, Sudoku and online brain training exercises. It’s also important for people with dementia to develop new ways of remembering.

“For people with dementia, it can also be more helpful for them to learn new ways of dealing with memory loss, such as writing down names of things, keeping lists, or placing objects in the same place each time,” White added.

Because most risk factors are modifiable, it means simple changes such as maintaining healthy blood glucose and cholesterol levels, quitting smoking, incorporating regular exercise, and getting a good nights sleep can significantly reduce the risk of developing dementia.

What help is available?

A dementia diagnosis can be difficult for all involved, but it’s important to know that there is help and many services available. In addition to resources available from a local GP, each state has Alzheimer’s and dementia organisations that can offer advice and support. They can offer everything from counselling to carer support and more information about the condition.

There are also many public seminars around the country that you can attend to meet people in a similar situation to you, while Dementia Australia offers helpful information on its website. You can also call the national dementia hotline on 1800 100 500.

Do you know someone who has been impacted by dementia?