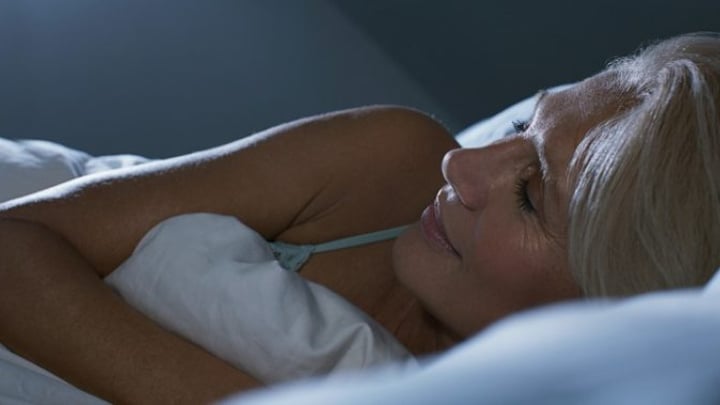 According to a dentist, people could sleep better if they put tape over their mouth when they sleep. Source: Getty

There’s nothing worse than not being able to sleep at night but one Aussie dentist has come up with a creative and affordable hack that he swears by for a better sleep.

Appearing on Friday’s episode of Sunrise, Ron Ehrlich explained how a piece of tape can do wonders for those who struggle to sleep. While it may look and sound ridiculous, Ehrlich explained that the tape should be placed over the mouth to promote breathing through the nose.

“A simple $2 piece of tape like this can be really helpful,” he explained on the popular breakfast show. “As I put it on, I stay calm. I breathe through my nose. It’s as simple as that.”

Ehrlich promised it would give people the best night’s sleep they’ve ever had. The hack works because it encourages nasal breathing, which Ehrlich stressed was important.

“Noses are for breathing, mouths are for feeding,” he said. “A person who might benefit from this is a person who sleeps with their mouth open a night. A person who has dry lips, who has a dry mouth. Who always needs to have a sip of water through the night.”

During the interview, he also explained that people need to start taking sleep seriously and that it’s all about getting a consistently good night of sleep. For most of the population, between eight and nine hours a night is ideal, while quality of sleep is also important.

“Breathing well while you’re asleep is critical,” he stressed.

According to Ehrlich, breathing well is using your nose to breathe slowly and gently and breathing from the diaphragm to give the body the balance it needs.

Read more: Forget lie-ins, too much sleep is actually bad for your health: Study

“Breathing through your nose is so important,” he continued. “It warms, humidifies and filters the air before you take it into your lungs, it balances out the body chemistry.”

Before taking the plunge and using it at night, the dentist suggested using the tape during the day, noting people will either be able to breathe through their nose or that they may not be able to if their nose is blocked.

Viewers at home were quick to comment on the sleep technique.

One person on Facebook joked: “If I put the tape on my wife’s mouth I’ll get more sleep.”

Another said: “This is from the Buteyko Breathing Method for Asthmatics. Plus you don’t put the tape over the entire mouth. Just a small strip vertically in the middle. It encourages nose breathing. Not forcing it.”

A third added: “Been doing this for years.”

Have you ever tried this technique? Does it work for you?