Rethink the fish and chips: Seagulls could be spreading potentially deadly superbugs 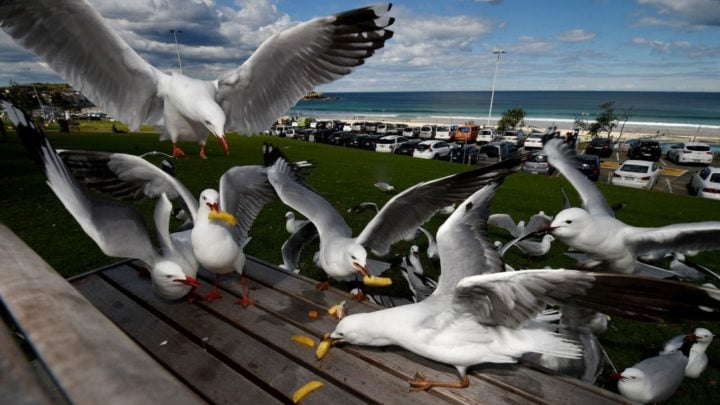 While squawking seagulls are a fixture on Aussie beaches and there’s always a risk they could ruin your fish and chips lunch, new research shows they could actually be putting our health at risk.

Researchers from Murdoch University claim that many Australian silver gulls are infected with antimicrobial resistant bacteria which can cause serious infections such as urinary tract infections and sepsis. According to the latest study published in the Journal of Antimicrobial Chemotherapy, these resistant bacteria are similar to the ones that cause disease in hospitals and nursing homes.

What’s worse is it’s becoming a widespread issue at beaches across the country, with seagulls found to be carrying the bacteria that could be putting humans at risk at an array of different seaside locations.

“Seagulls act as ecological sponges (bio-accumulators) and we have earmarked them as a potential reservoir for agents that may cause human disease,” lead researcher Dr Sam Abraham said in a statement. “This is the first comprehensive study establishing that seagulls across Australia are carriers of drug resistant disease-causing E. coli that could affect humans.”

While most strains of E. coli are harmless to humans, others cause a variety of serious diseases and health problems such as pneumonia and diarrhoea. The study found that more than 20 per cent of seagulls tested around Australia carried bacteria that were resistant to commonly used antimicrobial medication including cephalosporins and fluoroquinolones.

It was also found that seagulls found in New South Wales and Victoria carried bacteria that were resistant to carbapanem drugs – medication used in hospitals to combat antimicrobial resistant infection in hospitals when other medication has failed.

A seagull found at Cottesloe Beach in Western Australia also carried bacteria resistant to colistin, which is used as a last resort drug to fight antimicrobial resistant infections. It’s the first time resistance to the medication has been detected in wild Australian animals and humans could be to blame by feeding seagulls when they visit the beach.

“Our results have raised the concern that seagulls could be acquiring this pathogen through their opportunistic feeding habits where they scavenge from leftover human waste and may then be subsequently spreading these resistant bacteria over vast distances,” researcher Dr Mark O’Dea said. “Management of this issue will require examination of human waste sources to determine where gulls are acquiring these elements, and whether or not this can be managed.”

There are also fears that the resistant bacteria could impact Australia’s livestock and agriculture produce.

“Humans are now transmitting their pathogens to commensal wildlife around Australia’s major cities and these drug resistant microbes are likely to be returned with interest through contaminated surfaces, water and food,” seabird ecologist Dr Nic Dunlop explained.

If you’re experiencing symptoms such as nausea, vomiting, stomach cramps of diarrhoea, always talk to a health professional about the best treatment options.

Do you believe seagulls can carry potentially harmful bacteria? Do you feed them when you go to the beach?