‘We are still the three of us’: Angela Bishop on coping after husband’s death 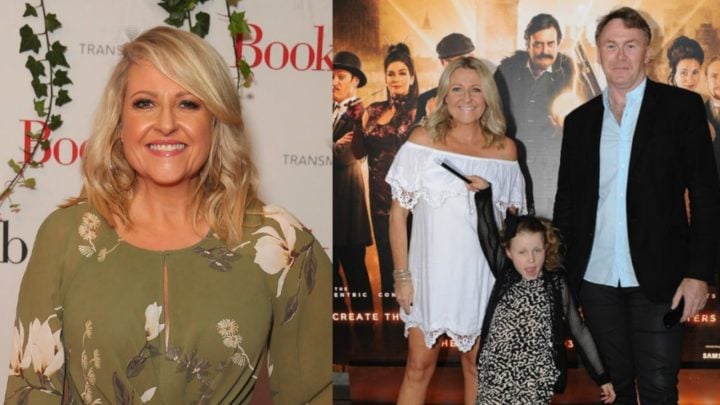 Angela Bishop has opened up on losing her husband and how her daughter has coped. Source: Getty.

Angela Bishop has spoken openly about how she and her 11-year-old daughter are coping with their grief after losing her husband Peter Baikie to cancer in 2017 – with the Studio 10 star admitting she often can’t contain her emotions in public.

Speaking in an exclusive chat with The Australian Women’s Weekly magazine, the TV favourite, 51, revealed that she and her daughter Amelia now rely on each other for strength and still consider themselves part of a group of three – even considering what Peter would say when making family decisions.

“You’ve got to quickly have a dash to the loo and have a cry then reapply the mascara and come back again,” she told the news outlet on keeping up a brave face in public.

“I don’t try to keep the grief in when it hits, otherwise I’ll do myself an injury. You’ve got to go and find somewhere to have a little cry. I do it a lot in the traffic in the car, or in the carpark at work. You just have to let it out.”

Angela’s beloved husband died at the age of 54 in 2017 from a rare form of cancer. She’s spoken openly ever since about how she’s dealing with her grief, while raising awareness of cancer itself both on and off the Channel 10 show.

Amelia has been a huge pillar of strength for Angela, who she admitted gives her a reason to get up and keep going every day.

While the youngster has remained strong and speaks openly to her mum about her father’s death, Angela said she has also embraced a love of drama, baking and even making her own short films – achievements she insisted her husband would be immensely proud of.

Angela explained that her small family became a close-knit group of three from the day Amelia was born, as she was forced to undergo emergency life-saving heart surgery at just two days old. From there, they remained close and still do now – despite Peter not physically being there.

“She’s such a tough little girl and we thought, ‘Right, we are a team, we are invincible’,” Angela explained. “And that’s how we attacked Peter’s cancer. We thought, ‘We can beat this, but it has to be the three of us’. That’s always how we were. And we feel like we are still the three of us.”

She said while her and Amelia make family decisions together now, they’ll always consider what Peter would have thought – and take that into account too.

Angela credited her good friend and fellow TV star Carrie Bickmore with helping offer her strength and guidance, particularly when it comes to Amelia.

Carrie lost her own husband Greg Lange – who is father of her son Oliver – to cancer in 2010 and Angela said she’s helped offer her advice on how to speak to Amelia about losing her father and her own grief.

Meanwhile, Angela also opened up on her shock when she discovered, live on air on Studio 10, that her close friend and co-star Kerri-Anne Kennerley’s husband John had died recently. While viewers were left heartbroken as Angela broke down on air, she admitted she was in complete shock as she had seen John just two weeks before – and understood exactly what Kerri-Anne was going through.

It comes more than a year after a statement – issued by Peter’s family after his death – said his courageous fight against the disease had left everyone who met him full of immense admiration.

“He found his tower of strength in his wife Angela and the love of his daughter Amelia,” The Daily Telegraph reported of the statement. “The love shown to Angela and family during his final days by Peter’s circle of friends is testament to the man he was.”

Read more: ‘Nothing will be tougher’: Angela Bishop’s grief a year after husband’s death

The statement said that the “car fanatic and gifted mechanic” had a rare cancer, which was diagnosed in February 2016. Angela – who is also the daughter of pollie Bronwyn Bishop – and Peter married in 2005.

Angela, who’s been on Channel 10 for almost 30 years, has previously been an ambassador for a campaign for intestinal cancer and worked to raise money for breast cancer research.

Have you lost a loved one to cancer? How did you found you coped with the grief?