Forget the bright lights: We need our kids to stay on the land 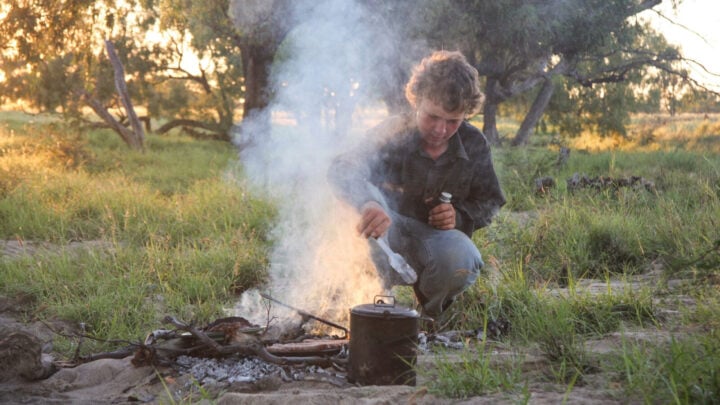 Even as a boy, Jeremy Kinnon knew how to keep a billy boiling - as well as many of the other time-honoured skills it takes to keep an outback station going.

The bush is suffering a mass exodus of its young people. That leaves many stations in the hands of 60-year-old or 70-year-old owners, as the next generation is lured by the promise of an easier life in the city.

That’s bad for our food and wool production because, without the next generation to take over the farm or station, the land is often sold into foreign hands. And it’s bad for all Australians, because if we don’t keep growing our own wool and producing our own food, we will be paying so much more for items that have always been Australia’s strength. Steak can already be expensive but if we’re not careful, sooner or later, we’ll be paying $30 a piece!

Although I believe it’s a tragedy for all of us to lose these traditional rural industries, I believe it’s also often a tragedy for our young people themselves – and their future children. There is so much in a bush childhood that builds capable, independent, resilient people. We may not always have a formal university education but we have learnt in the ‘university of reality’.

Learning what it takes to keep the billy boiling

When I was a kid, I did Distance Education but some station kids were sent to boarding school. Whichever you did, when the holidays came around you came home and had to do your bit around the station.

On our station, a lot of the horse work was left for school holidays. It wasn’t unusual for me to do two weeks of solid mustering. It gave us a real work ethic and an appreciation of what it takes to keep the billy boiling.

I believe every family could benefit from bringing their young people to do a stint on a sheep or cattle station. Maybe one day we’ll be able to offer that here on Nogo Station but in the meantime, I get so much from having the city youngsters on the Nogo Station Experience and seeing them get a taste of this different way of life.

It was the same when my kids were growing up. We’d not long diversified into tourism and they needed to pull their weight. At 12 or 13 my daughter Abigail was baking the scones for the Cobb & Co Stagecoach Experience and serving people in the courtyard cafe we had then.

By the time my boys, Jeremy and Lane, were 15 they could drive the stagecoach – not in charge of guests but able to get everything ready and capable of taking over when they got a little older.

They knew I relied on them and they developed the people skills and the adaptability required to deal with situations. Even if 30 people turned up in the cafe, Abigail would handle it calmly. If she could see she couldn’t serve everyone alone, she’d just call my mother in.

When the boys were older and we were renovating The Welcome Home hotel, they worked alongside the tradesmen. They even won a Mitre 10 tradesmen’s award for best work ethic two years in a row!

This is real life, not a computer game

Everyone learns to lend a hand here in the bush. Not long ago, I was dealing with Starlight’s Cruise Experience boats down at the river. There was a flood coming fast and I needed to get everything secure but I was there on my own – the only person I could find was a teenage boy who lived nearby.

I said, “Could you give me a hand, mate, I need to get these boats in”. He dashed off to ask his mum then, permission granted, I told him to put his work boots on because we had a real job ahead of us! We had to work things out, just the two of us, using ropes to make things secure. We worked until well after dark. I was swimming out to the boats and he was holding the torch.

We loaded up a trailer to take things to higher ground. As I handed him one of the boxes, a big python started coming out of it. I didn’t know a snake had got in there! It gave him a heck of a fright and he dropped the box, but he was OK.

Then I went to unhook the trailer because it was overloaded at the front and I realised it didn’t have a jockey wheel. We tried a few things but it wasn’t working. Then he thought a minute and said, “What about the ratchet straps …” and he explained his plan. So we did what he suggested and it worked.

You should have seen the kid’s face! He was so thrilled we met the challenge! We weren’t in any danger ourselves but a lot was at stake with saving the riverboats.

At the end of it all, he said, “Mr Kinnon, I want to thank you for inviting me to do this. I had the best afternoon in my life! It’s a lot better than playing on the computer!”

If you’re a grandparent, you might see how many kids are missing out on this sort of challenge these days. We often see grandparents here on the Outback Pioneers experiences with their grandkids, giving them a taste of nature and adventure.

Get the message about life on the land right

Unfortunately, some of our politicians over the years have been saying negative things about farming the outback country. They say it’s too dry or the industry is dying and that obviously discourages our kids. We have to counter so many things that draw them away.

I would like to see more official acknowledgement of all the skills our youngsters learn in the bush and better understanding of how important our young people are to developing our local economies.

There are many opportunities for them here, from retail (really good retailers are hard to find) to land management, hospitality to medicine.

We all need to earn a living but life is not all about earning the big money in the city. If I can have a flock of sheep and provide something worthwhile and ride my horse, I’m happy. I can go and talk to my horse Whitey on a crisp winter’s morning. He puts his head down in my lap. I understand how he thinks and I’m pretty sure he understands how I think! It’s moments like those when outback life gives you everything you could possibly want.

This is our Australian heritage and it still has so much to offer. We need our young people to have pride in this and pass it on to future generations.

Seeing tourists enjoying it and learning about our world on the Outback Pioneers holidays helps our young people feel proud and a sense that their bush life is something worthwhile.

I believe we’re the lucky ones who live here all the time but it’s really not that far for you to drive out, fly out or catch the train and immerse yourself in this incredible outback world.

You’ll find my now-adult kids are still here, either working the land or hosting guests on the Nogo Station Experience. They wouldn’t want to be anywhere else. And I believe that’s a very good thing for the outback and for Australia.

Did you have a bush childhood? Do you think an outback experience would be good for young people today?