Prostate cancer is a silent killer: Here’s how to tell if you’re at risk 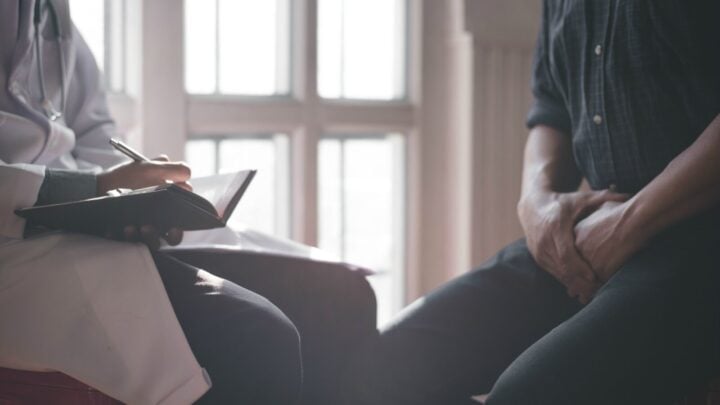 A leading urologist is urging Aussie men over the age of 40 to get tested for prostate cancer after revealing a number of men are getting tested too late. Professor Tony Costello, who performed the first open radical prostatectomy using robotic surgery in Australia in 2003, is now on a mission to raise much-needed awareness and reckons telehealth services like Maxwell Plus may be the way to go.

Prostate cancer is often referred to as the ‘silent killer’ because in its early stages there are usually no obvious signs or symptoms, however, there are some things that may mean you’re more likely to get the disease, Costello tells Starts at 60.

“Unfortunately, prostate cancer itself, because it grows on the outside of the prostate, doesn’t cause a lot [of] symptoms,” Costello says. “And if you do get symptoms, it means it’s a very advanced cancer.”

Advanced prostate cancer symptoms can include frequent urination, pain while urinating, blood in the urine or semen, a weak stream, pain in the back or pelvis and weak legs or feet, but Costello stresses some of these symptoms may also point to an enlarged prostate, which is a very common non-cancerous problem.

So how do you know if you have prostate cancer?

Professor Costello says if you’re in your mid-to-late 40s, whether or not you have a family history of prostate cancer or are fit and healthy, you should be tested for the disease, saying PSA testing is the best way to go. The prostate specific antigen (PSA) test is a blood test that can help detect prostate cancer. It looks for specific antigen levels (substances foreign to the body that causes an immune response) in the blood. However, the test has been called controversial in the past, with some suggesting it can lead to overdiagnosis, harmful testing and unnecessary treatment.

“Often doctors will only discuss prostate cancer when a patient specifically asks for testing and even then may advise against it — meaning too many Australian men are not being diagnosed with the fatal disease until it’s too late,” he says.

“If men have a blood test in their 40s to get a baseline PSA and then annually from the age of 50 they will have the best chance of detecting prostate cancer early.”

If a man’s first PSA test returns a positive result, another test is performed a few months later to assess whether PSA levels are increasing. If they are, a biopsy of the prostate is then performed, followed by a magnetic resonance imaging (MRI) scan.

While it was common in the past for men to have their prostate removed if cancer was present, many with a low-risk diagnosis now choose to practice active surveillance — where a health provider monitors the progression of the cancer through regular PSA measurements, digital rectal exams, MRIs and further biopsies. If the cancer shows signs of aggressive growth, a patient can start treatment or undergo surgery.

However, due to the ongoing pandemic, in the past six months, PSA testing in Australia has fallen dramatically by more than 15 per cent, with a similar drop in the number of biopsies carried out compared to the same time period in 2019. Costello reckons telehealth platforms like Maxwell Plus are a great way for patients to monitor their prostate cancer risk, especially during Covid-19 when people are reluctant to visit their GP.

“I think we’re still having a lot of men [who] don’t access the test and get a late diagnosis and have no opportunity to cure,” he says. “Men should know whether they have prostate cancer and whether it needs any treatment before it spreads and it’s incurable.”

So how does it work? You’ll first have to sign up and answer a few questions, which will then be assessed by a doctor who will determine if online testing is right for you. You’ll then be issued with a blood test request to take to your local pathology lab. A doctor will then get back to you about the next steps to take.