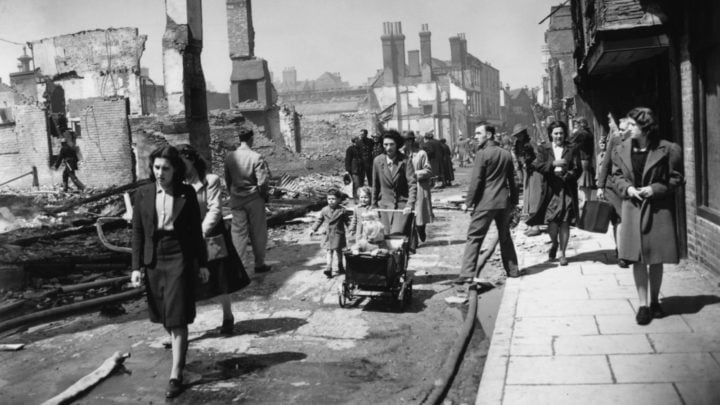 My mother was a woman few people ever really knew. Oh yes, they knew her as the mother of six children, a friend and neighbour, but not the real Lucy Apted. She was born the eldest daughter in a family of seven children. Her childhood consisted of hard work, as she looked after her younger brothers and sisters, then at the age of 14 she was sent into service. She became a servant to the gentry folk and waited on them hand and foot. Eventually reaching the dizzy height of a Lady’s companion when life became a little easier.

Her teenage years were spent during the First World War in London, United Kingdom. She had many narrow escapes and saw many wounded soldiers returning from the Somme battlefields. Soon after the war ended my mother married my father and together they had six children (no contraception in those days).

Then came the Depression. My father joined the army to ensure a weekly wage, as there was no work to be found and we were going hungry. When he went off to fight in World War II, he was captured and become a prisoner of war at Dunkirk. My father spent the remainder of the war in a German POW camp.

Suddenly, Mother was on her own with six children to provide for. With all the work she had looking after us, she still went out cleaning other people’s houses and did their shopping. Some days she would return home so tired she would fall asleep in her armchair. She always went to bed early, as soon as possible after my brothers and sisters and I went to bed.

Our home was destroyed by bombs. The place where my sister’s had recently found work was also bombed. The school where my younger brother and sister went was also destroyed in the air raids.

My mother spent the day digging her way through rubble to get our neighbours to safety. Her best friend died in her arms after Mum pulled her out of what was left of her home. The woman’s 10-month-old daughter also died.

We lost many friends and neighbours that day, but my mother was determined that life would go on and she set about finding us a new home. We had nothing but the clothes we were wearing. I can’t imagine what it must have been like for her to send us off to school not knowing if she would see us again during the war time. There was also the trauma of not knowing if my father would survive the war.

I remember seeing my mother crying one day, something I had never seen before. I cuddled her and asked what was wrong. It was the day she’d received news my father was missing, believed dead. It was almost a year later before she heard he was alive.

Dad had been on the guns covering the rear as our men raced into the boats at Dunkirk. The shells had killed all his mates. He lost his memory and his identity tag had been blown from his neck in the blast.

Somehow Mother kept us all together throughout the daily air raids on our town. She provided enough food for us to eat too. I marvelled at how she gave us a happy and safe ‘arbor’ to come home to every day. I honestly don’t know how she did it. I don’t think I could ever be as brave as she was, giving all her children the courage to face each day as it came.

The six years of living through a war and raising six children is something worthy of celebration in my opinion. There were more civilians killed during World War II than there were military personnel. There are many mothers whose stories have never been told.

When the war finally ended and my father came home, there was a strangeness that is hard to describe; a difference that seemed to permeate the very air we breathed.

What was it? We children did not know of course! There had been so many changes so many experiences. Life and death had played out before us all. It was unreasonable for us to think we would all be the same people we were before the war. The last time my father had seen us we were little children but he came home to us in school or as adults with jobs.

Perhaps hardest of all is that he came home to a very different woman in his wife than the one he’d said goodbye to. My mother had become self-assured and competent, she no longer needed a man to provide for her.

My father was different too. I’ve no doubt his experiences as a POW was awful.

My parents had both held dying friends in their arms, they had both endured the hopelessness that war brings and they discovered that they could no longer live together. Their separation was amicable. The differences between them were too much and they had become strangers to one another.

The impression my mother made on me has stayed with me all my life. I wish I could be just half of the woman she was. When she died a few years ago I lost my very best friend and I miss her still.

Were you or your loved ones affected by war? Do you have a loved one serving in the defence forces today?