‘Sleepless in Seattle, dogless in Cronulla: Coping with losing a pet’ 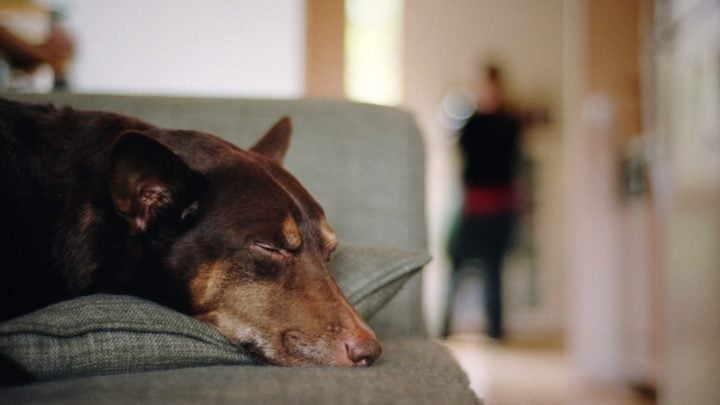 Barbara writes about the pets she's had in her life to help with the grief of losing her dog recently. Source: Getty Images

Sadly, I had my amusing little dog Cocopops put to sleep just before Christmas. I’d promised her a comfortable, easy death and I made sure that happened. Friends commiserated and then asked are you getting another dog? I thought about this and said no, I’m too old and couldn’t go through the pain again. I miss her so much.

Cocopops came to me via a friend’s email, which said ‘free to a good home’. She was part poodle and part Sydney Silkie they said. She was 17.

Recently I met a bloke holding the cutest little grey puppy, which cost $2,000 he said. I realised I’d never ever bought a pet, they just turned up! They stay, making themselves at home in no time at all.

I’d had dogs before, one called Rosie whom I said could stay till I found out who owned her. Nobody did. I think she was dumped. We were having a party and she just came to the door. She was a lovely black kelpie cross who loved to round everybody up.

Then there was a cattle dog called Annie who would visit all the time and I’d ring up her owner and tell them she was here. She had a thing for chasing Volkswagen Beetles. One morning I discovered her sitting one the front verandah after she’d been hit by a car, just waiting patiently till I came out. I realised we loved each other! She also loved Rosie the kelpie. If I went away, she’d sit out the front and watch Rosie get into the Kombi then she’d cry. Quite broke me up.

One day her owners rang and said I could keep her since they were off to Queensland to live. Somehow Rosie morphed into Rosie la Woof (she did a lot of woofing) and Annie became Pud, or Annie la Pud (she did a lot of eating). Rosie religiously washed Pud’s ears every day, which led to the vet saying you could eat your breakfast out of Annie’s ears, they were so clean.

Alice the cat deserves a paragraph. Her owner, a dear friend, asked me to mind Alice as she was moving to a flat that banned pets. Alice had three legs having been in a car accident, she must have been a terrible driver I used to say. She was a tortoiseshell and we said she waltzed, one two three, one two three.

She never quite understood that she had three legs and would climb and jump. The problem was watching her do this. My father, who had a withered leg from polio, would be yelling “Don’t jump Alice,” and be hopping off to try and stop her. He never got there in time and *splat*! Alice would land unharmed.

Once I was visiting my mother in a hospital in the inner city and when I returned to my car there was a green budgerigar sitting calmly on the roof. I borrowed the empty Hospital Suggestion Box and put him in there and so I had a budgie. I was expecting him to speak Italian, but alas not a word popped out.

My first cat was a black tom who turned up covered in scars and scabs. He only ever said “Ow” so that became his name. I took him to the vet since he was such a mess and the vet assured me that after desexing he’d be a fine cat. Indeed he was except that he thought he was a dog! He followed me around, liked car rides and wanted to hang his head out the window like a dog.

In the days of telephone boxes he would sit outside patiently waiting for me to hang up then walk home beside me. A couple of large Alsatians used to walk past every morning and Ow loved this. He would sit just out of reach on the pillar of the fence and eyeball them. They went crazy.

There were times I nearly missed the train to work since he sneakily followed me to the station and I had to run back with him and lock him in. When we moved to Waverton, a rocky sort of suburb, he amused himself catching funnel web spiders, which he killed and neatly lined up on the back step.

Now I’m ‘petless’ in Cronulla and wondering if any other homeless animals will turn up.

Have you had pets in your life? How did you cope when they died?