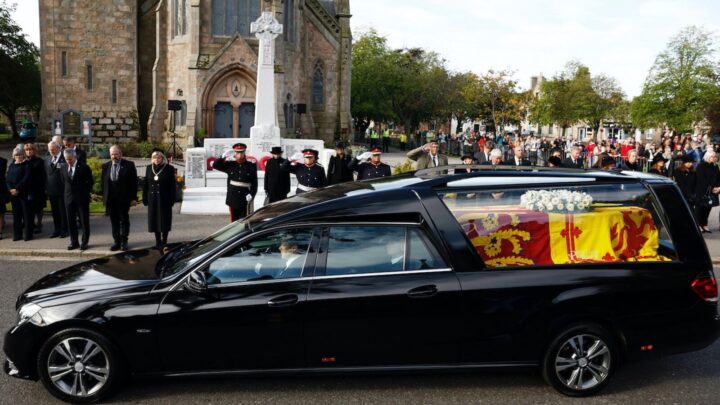 It’s been less than a week since the death of Queen Elizabeth II and Scottish mourners have lined the streets of Edinburgh, standing in silence to pay their tearful respects to the late monarch.

On Sunday, September 11, at 10 am (7 pm AEST) a hearse carrying the oak coffin of the UK’s longest reigning monarch drove out of the gates of Balmoral Castle to commence a  six-hour long journey from the Scottish Highlands to the Palace of Holyroodhouse.

Queen Elizabeth’s coffin was lifted out of the hearse by a bearer party found by the Royal Regiment of Scotland. pic.twitter.com/lt5tpxPtYx

Her coffin was draped with the Royal Standard of Scotland, held in place by a floral wreath of flowers picked from the garden of the Balmoral estate.

“I feel numb. She was amazing, so selfless, and such a servant to her people,” Wendy Green, one of the mourners who came to pay her respects outside the Queen’s Scottish residence, tells Time Magazine.

As the hearse made its slow drive through villages and towns on its way to Edinburgh, flowers were tossed onto the road, bagpipes played, and others applauded for the late Monarch.

“There was no way I could miss this. I would regret it for the rest of my life,” Eilidh Mackintosh, another one of the thousand mourners, tells 7News.

“She never let us down and I didn’t want to let her down either. Now she has gone there is a big hole in the heart of the nation.”

The Queen’s coffin will rest in Holyroodhouse’s Throne Room before another procession on Monday afternoon takes place for her transfer to St Giles’ Cathedral.

King Charles III and other members of the Royal Family will be in attendance for the procession and attend the service held at the Cathedral.

Princess Royal, Princess Anne, has already arrived at Holyroodhouse accompanied by her husband, Vice Admiral Sir Tim Laurence, alongside her brothers Prince Andrew, and Prince Edward and his wife, Countess Sophie of Wessex.

Anne, Princess Royal, curtsies as the coffin of Queen Elizabeth II, draped with the Royal Standard of Scotland, is carried into the Palace of Holyroodhouse, in Edinburgh ❤️
#QueenElizabeth pic.twitter.com/Ulc1hT5c1l

Her Majesty’s coffin is scheduled to lie at rest at St Giles Cathedral for 24 hours to allow the people of Scotland to pay their respects before Princess Anne and the Royal Air Force transfer the Queen to Buckingham Place, to rest in the Bow Room.

According to the Royal Family’s official website, “On the afternoon of Wednesday 14th September, the Coffin will be borne in Procession on a Gun Carriage of The King’s Troop Royal Horse Artillery from Buckingham Palace to the Palace of Westminster, where The Queen will Lie-in-State in Westminster Hall until the morning of the State Funeral.”

After the Archbishop of Canterbury conducts a short service, the Lying-in-State begins until Monday Monday, September 19.

The Lying-in-State will be the last time the public will have the opportunity to visit and pay their respects to the Queen before her final procession to her state funeral service.

Following Queen Elizabeth II’s death, aged 96, on Thursday, September 8, a series of constitutional and ceremonial events have taken place both in the UK and within The Firm.