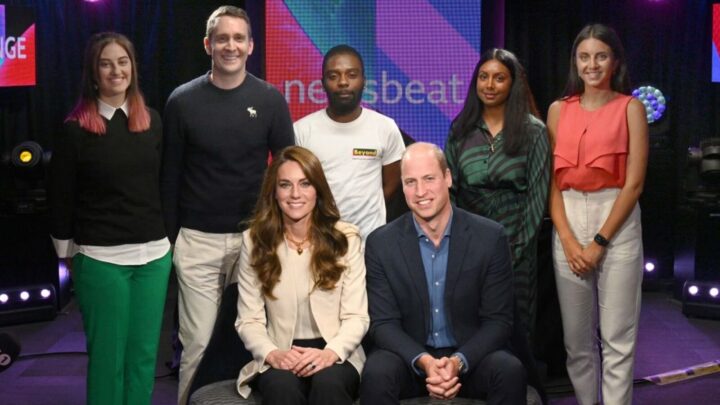 Prince William and Princess Catherine share a couple of lighthearted moments as they took on the roles of radio hosts. Source: Getty

From cocktail-making to radio show presenting, it appears that the Prince and Princess of Wales have added another string to their bow beyond their usual royal roles.

William and Catherine, both 40, surprised BBC radio listeners on Tuesday, October 11, when the royal couple took over BBC Newsbeat in honour of World Mental Health Day.

As advocates on the topic, the couple shared a powerful discussion on coping with depression and anxiety, giving information on toolboxes people can use.

Despite the heavy topic, the couple did loosen up while on air and treated listeners to a few hilarious moments.

As the couple sat down and chatted with other mental health advocates, William appeared to have gotten carried away with his discussion, as towards the end of the show the father of three joked, “I’m conscious we’ve run out of time — and [host] Pria [Rai] might say this is the worst Newsbeat production by two interviewers she’s ever seen.”

But Rai reassured the Prince that he did a “very good job” adding that he was more than welcome to come back and would even keep his seat warm for him in the meantime.

But, it was a certain outtake of the couple from the show that left listeners in stitches.

Before the end of the segment, William was heard practising his sign-off, repeating the words “thanks for listening” three times in different tones, causing Kate to go into a fit of giggles before cheekily saying, “please use all three”.

Over the years William has been an outspoken advocate of mental health. In January 2019, the Prince opened up about his personal struggle with mental health during a candid chat with New Zealand Prime Minister Jacinda Ardern.

The royal took to the stage at the World Economic Forum in Davos, Switzerland, to call for an end to the stigma that surrounds mental health.

“We’ve got to start tackling it now so that our children and grandchildren don’t have to go through this process, and they can be a lot more open about it,” he said.

Later in 2021, William, who previously worked as an air ambulance pilot, launched a mental health support package for Emergency Services personnel after sharing the “stresses and strains” he personally experienced during his time at the Royal Air Force (RAF).

William recalled in an interview how he was “really affected during jobs where children were involved” and opened up about how a particular incident at work really shook him.

“I still find it very difficult to talk about it,” the royal said.

“I get very emotional about it because it relates very closely to my children and so it is very hard to talk about it.

“People want to protect their families and loved ones from horrendous, horrible and very sad things. There were a number of times when I had to take myself away because I was just getting too involved in it and feeling it.”

William also created Heads Together, an initiative to help combat the stigma of mental health, in 2017 with his wife, and brother Prince Harry.