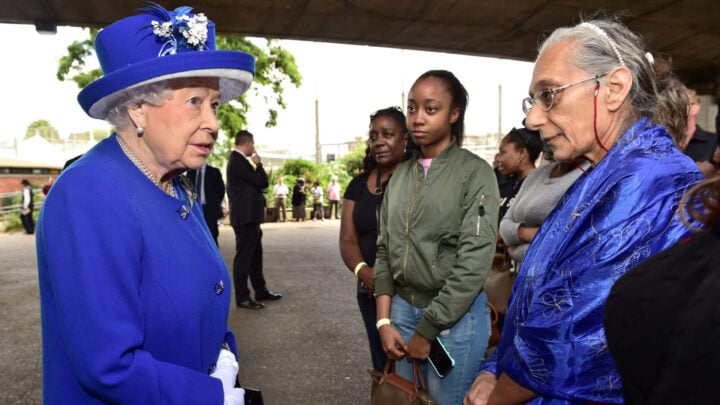 Queen Elizabeth II meets members of the community affected by the fire at Grenfell Tower in west London in 2017. Source: Getty

Talk of racism in the royal family has been rife since Prince Harry and Meghan Markle accused a member of the royal family of questioning their son’s skin colour prior to his birth, and now a senior palace aid has revealed the royals almost didn’t let the Queen visit Grenfell Tower in 2017 over fears she was perceived as racist among the community.

Sir Kenneth Olisa, the Queen’s first black Lord-Lieutenant of Greater London, told Britain’s Channel 4 News this week that racism is a “hot conversation topic” in the royal family right now as they work to establish themselves as an inclusive organisation. Sir Kenneth was participating in a segment on racism for the Channel 4 program.

He said the modern royals are aware the family has a disturbing history on issues of race — earlier this year documents discovered by The Guardian at the National Archives revealed the royals banned “coloured immigrants or foreigners” from serving in clerical roles in the royal household until the late 1960s — but that they are determined to correct the mistakes of the past.

Speaking about the Grenfell Tower fire, Sir Kenneth said the Queen almost didn’t visit the scene of the London tragedy with Prince William as palace aids worried she “would be booed or have things thrown at her”.

“I remember thinking as it all happened, it was quite scary. We didn’t know whether she would be booed or have things thrown at her, etc,” he said. “And when she got out of the car, all these people applauded.”

“I have discussed with the Royal household this whole issue of race, particularly in the last 12 months since the George Floyd incident,” he said.

“It’s a hot conversation topic. The question is what more can we do to bind society to remove these barriers. They [the Royal family] care passionately about making this one nation bound by the same values.”

The royals thrust into a racism furore earlier this year when Prince Harry and Meghan Markle accused a member of the family of being racist. Meghan told Oprah Winfrey in their infamous March interview there were palace “concerns and conversations about how dark his [Archie’s] skin might be when he’s born”.

When pressed for more information on which royal had made the comment, Meghan said “it would be very damaging” to reveal their name.

Royals back in the UK were said to be shocked by the allegation and just days later William told reporters “We are very much not a racist family”.

However, Harry and Meghan have doubled down on their insistence that the palace didn’t do enough to support them when Meghan was subjected to racist comments from internet trolls and the British media. Prior to stepping down from his senior role in the family Harry released several statements condemning the UK press for publishing stories with “racial undertones” and slammed the paparazzi for the “wave of abuse and harassment” directed at his then-girlfriend.

Meghan told Oprah the pressure of her new role and intense media scrutiny led to suicidal thoughts, but that when she asked the palace for help, it refused.

Elsewhere in the chat, Harry revealed that watching the media’s treatment of Meghan opened his eyes to implicit bias, something he said he wasn’t previously aware of because of his sheltered upbringing. He also suggested the reason the royals didn’t stand up for his wife was because they’re scared of the UK tabloids.

“For us, for this union and the specifics around her race, there was an opportunity—many opportunities—for my family to show some public support,” he said.

“And I guess one of the most telling parts and the saddest parts, I guess, was over 70 female members of Parliament, both Conservative and Labour, came out and called out the colonial undertones of articles and headlines written about Meghan. Yet no one from my family ever said anything. That hurts.”

Do you think the royals should work harder to correct their past mistakes?