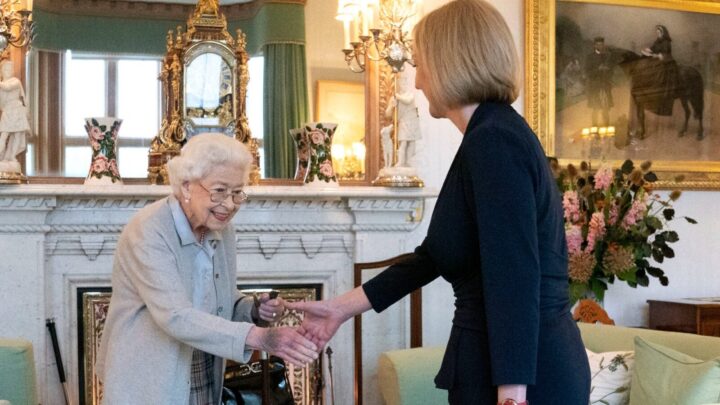 It’s a historical day for the British Monarchy as Queen Elizabeth II appoints her 15th Prime Minister in Scotland.

For the first time in her 70-year reign, the 96-year-old Monarch formally welcomed the UK’s next Prime Minister away from Buckingham Palace, with Boris Johnson and his successor Liz Truss travelling to Her Majesty’s Scottish home, Balmoral Castle.

A Buckingham Palace spokesperson had previously stated that the Queen would leave Balmoral to welcome the new Prime Minister in either London or Windsor, but instead, a switch was made at the last-minute to have Truss travel to Balmoral to have her meet the Queen instead.

Per the BBC, Buckingham Palace’s decision is “likely to prompt concerns about the Queen’s health and raise questions about her wellbeing in recent weeks. But it also shows the tenacious determination of the 96-year-old monarch to keep carrying out her constitutional duties as head of state, wherever she might be.”

However, The Firm’s attempt to ease the public’s concern over the Queen’s health failed as a photo shared by The Royal Family’s official Twitter account showing the Queen with a “purple” hand has left many fans alarmed.

Her Majesty asked her to form a new Administration. Ms. Truss accepted Her Majesty’s offer and was appointed Prime Minister and First Lord of the Treasury. pic.twitter.com/klRwVvEOyc

“That’s quite a bruise on her hand, the poor lady. I really hope she is well and in good spirits,” one user tweeted.

“Her Majesty is looking frail.”

“Elderly people bruise very easily, but does look rather nasty, bless you, Your Majesty.”

While others have suggested the Queen pass her duties on to other senior royals.

“She should have her feet up with her knitting and a cuppa not meeting the future pm let Charles do it he’s technically king,” they wrote.

“Great to see the Queen in good shape. Hope she’s fine. It’s time for William and Kate to take over. Charles does not necessarily have to come to the crown.”

“No, it’s time for Her Majesty to abdicate and enjoy retirement and the Prince of Wales to succeed her while he’s still in his 70s, healthy and can perform the same duties.”

The Queen’s meeting with Prime Minister Truss follows the recent news that Her Majesty’s role has been formally rewritten by Buckingham Palace, removing duties she “must fulfil” and entrusting these roles to her son, Prince Charles.

The updated job description still names her as the official “Head of State” and “Head of Nation,” but has taken out requirements to attend specific events like the Opening of Parliament which was seen as necessary by “constitutional convention”.

Instead, the new description states her Her Majesty’s job, “encompasses a range of parliamentary and diplomatic duties”.

The Queen’s new role and duties now focus on providing support to the wider Royal Family, while moderating the specific duties she is expected to perform.

Buckingham Palace has downplayed the significant change, saying it is nothing “drastic” but rather a small post-Jubilee update.

The change in the Queen’s royal duties is confirmation that the Palace has recognised how things have changed for the Monarch, who is dealing with ongoing mobility and health issues.