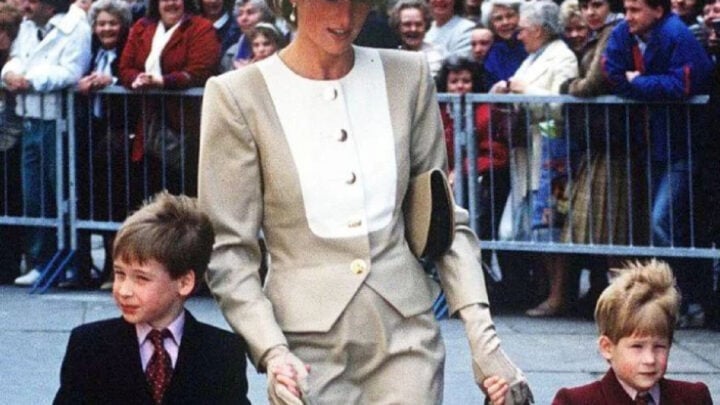 Princess Diana is ever the dutiful mother as she plays with Prince William and Harry in the gardens of Gloucester. Source: Instagram

Heart-warming footage of Princess Diana playing with Prince William and Prince Harry has emerged on TikTok, and its left royal fans reeling from the cuteness.

The footage, originally taken in 1986, shows the royal family enjoying a day in the gardens of Highgrove House in Gloucester as a reserved Princess Diana watches over her energetic young sons. The adorable video is narrated by an unknown journalist who provides entertaining commentary on the footage.

The video begins with a playful Prince William dressed in a tailored colonel uniform as he determinedly climbs the playground obstacles as a relaxed Diana remains close.

“The Princesses own sleepless nights are getting fewer as the royal children grow up,” the narrator begins.

“Corporal William Windsor has got his own uniform. The uniform was a present from the families of the first battalion of the parachute regimen, the Prince of Wales’s Colonel and Chief.

“Two regular size uniforms were cute down to size for the two young Princes.”

Diana talks with William as he continues navigating the playground obstacles, a young Prince Harry now in her arms.

“What is this?” she asks William as she tugs lightly on the back of his uniform.

“My jacket!” he responds with endearing sass, before misplacing a step.

A surprised Diana instantly reaches out to catch her young son, but thankfully young William already has that covered. Diana is seen placing her arm to her chest in a gesture of relief before letting out a small giggle.

The two young Princes then play together adorably as William pushes an animated Prince Harry on the swing.

“Is that fun?” William asks Harry.

Before long, Diana leads the young Princes back to the house, but a cheeky William has other plans and instead runs through the gardens.

“Quick because Mary will go,” Diana says to William in an attempt to get him to follow her.

A stubborn William refuses to respond, prompting Diana to engage in some innocent manipulation tactics.

“Alright Harry will have all the fun then,” she says, walking the other way.

“No!” Harry exclaims, clearly not wanting to miss out.

“No, it’s alright,” Diana relies, flicking her hand up as she feigns carelessness.

William soon follows obediently and the video comes to an end.