Would you want to know if you had Alzheimer’s? Ross Walker investigates 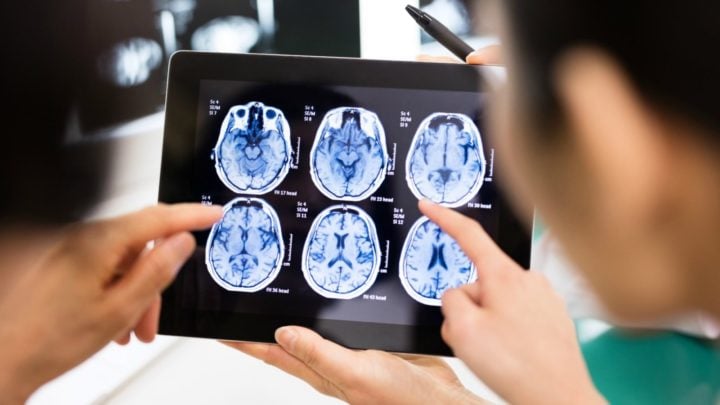 Researchers think they've developed a test with 96 per cent accuracy that can predict if someone will develop Alzheimer's disease, but would you want to know? Source: Getty

If it was possible to predict you were at higher risk of developing Alzheimer’s disease in 20 years time, would you really want to know? Researchers from the Washington University School of Medicine in St Louis have published an article in the journal Neurology, where they believe they have been able to do just that with around a 94 per cent accuracy.

Alzheimer’s disease is the most common form of dementia and the evidence clearly shows that’s due to a combination of increasing sluggishness in the microcirculation of the brain and reduced clearance of accumulated toxic proteins. Every time you have a thought or emotion, a chemical reaction occurs within the brain and a waste product is created by the reaction.

It’s a bit like having a meal and having to remove the scraps off your plate by washing the plate or using the dishwasher. These toxic proteins accumulate over time because of defective clearance by the two mechanisms above. These toxic proteins are known as amyloid proteins and by measuring certain ratios in the blood stream and combining this with a person’s age and another well-described Alzheimer’s associated protein known as APO E4, leads to this highly accurate prediction for Alzheimer’s disease, 20 years before the diagnosis.

Up to now, the gold standard has been a PET brain scan but it appears that this new blood test algorithm is even more accurate.

The study followed 158 adults older than 50 of which 148 were cognitively normal at the start of the study. The blood test and the PET scan agreed 88 per cent of the time but interestingly when the false positive blood tests were examined a few years later, the PET scan became abnormal.

You may ask why would I want to live with the sword of Damocles poised well and truly above my head waiting to strike? The answer to this is very clear. At present, the current management for Alzheimer’s disease is quite poor and the prognosis is dreadful in almost all cases. But there have been some very encouraging studies performed on new drugs in this area and in particular, monoclonal antibodies have shown a stabilisation and even reversal in some cases. Another drug, Anavex, in a small study of only 32 people performed in Melbourne showed significant reversal of the disease, not to mention studies of certain antidepressants and anti-inflammatories which have shown some benefit especially in laboratory animals and some early human work.

Professor David Smith at Oxford University performed the Optima trial of 271 people with mild cognitive impairment measuring MRI scans and neurocognitive testing at the start of the trial and 2 years later. This was a randomised, placebo-controlled trial of high-dose Multivitamins, showing a 30 per cent reduction in progression to Alzheimer’s disease and in those patients with the highest homocysteine levels, a 50% reduction.

A recent study performed in the UK, known as the Whitehall 2 study of just over 10,200 participants, shows that maintaining high levels of social contact between the ages of 50 and 70 led to a significant reduction in progression to cognitive decline.

Dale Bredesen has written a book, The end of Alzheimer’s disease, and also published a pilot study of his MEND program of 11 patients with varying degrees of Alzheimer’s disease. This study showed reversal of the disease in 10 out of 11 cases by the use of lifestyle modification and nutraceuticals such as evidence-based supplements, brain training and transcranial brain stimulation.

So, if you decide to have this blood test algorithm when it becomes available, if it was positive, giving you the potential for developing Alzheimer’s disease in 20 years time, there is already increasing evidence that there is so much you can do right now to prevent any progression to this horrible condition. Also, with significant advances in modern medicine, it’s highly likely that we will have very effective therapies for this condition over the next five to 10 years. So, would you want to know? I certainly would!

Would you want to know if you had Alzheimer’s disease?