‘We stand as friends’: Anthony Albanese pays tribute to the Queen for Platinum Jubilee. 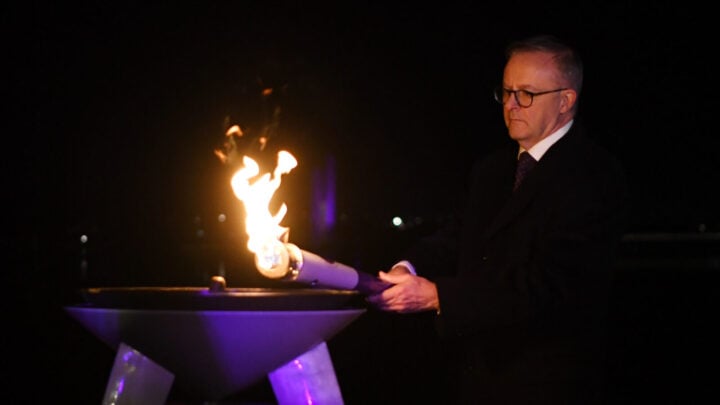 The Prime Minister took the moment to declare Australia and England as "equals" and as "friends". Source: Getty

Prime Minister Anthony Albanese honoured Queen Elizabeth II as the Platinum Jubilee celebrations kicked off, commending the Monarch for being an “inspiring, growing presence of calm, decency and strength”.

The Prime Minister took the moment to declare Australia and England as “equals” and as “friends” instead of “parent and young upstart”, lighting a beacon to commemorate Her Majesty’s 70-year reign.

This week marks The Queen’s Platinum Jubilee. In her seven decades on the throne, The Queen has been a reassuring constant, projecting calm and strength.

Tonight, along with 53 other nations, we light a beacon to give thanks to Her Majesty and send our warmest congratulations. pic.twitter.com/1TuU5qUkXN

During a ceremony at Canberra on Thursday night, June 2, Albanese said: “The Queen has been a rare constant, an enduring, inspiring, growing presence of calm, decency and strength.”

“Australians hold Queen Elizabeth in respect and affection, even as the bond between our nations is no longer what it was at the dawn of her reign.

“No longer parent and young upstart. We stand as equals, more importantly, we stand as friends.”

Standing in the same spot Her Majesty stood in during a visit in 1963, the Prime Minister praised The Queen for showing immobility from the very beginning.

“Unlike her forebears Princess Elizabeth did not choose a new name for herself as monarch. There was no question that she would retain the name that she had for all of her life. Already she was giving a sign of the stability and continuity she would provide, and indeed the continuity that royal women have provided,” he said.

“As we mark this Jubilee, we can say that she fulfilled that purpose.

“Her Majesty has amply kept her promises. Hers continues to be a life of unswerving loyalty, unfailing dignity, grace under pressure, a warm welcome for every person she met.”

Albanese’s speech, seemingly hinting at Australia leaving the Monarchy, comes as the newly elected Prime Minister swore in a Minister for the Republic for the first time in Australia on June 2.

Newly appointed Matt Thistlethwaite told The Guardian that he believes as the Queen “comes to the twilight of her reign, it’s a good opportunity for a serious discussion about what comes next for Australia”.

The Chair of the Australian Republic Movement (ARM) Peter FitzSimons said it was the “best news” to have “a Minister of the Crown devoted to removing the Crown”.

Monarchists slammed the move, saying the timing of appointing such a minister is tasteless as The Queen celebrates her Platinum Jubilee.

“I think it’s absolutely ridiculous, it’s come at the worst possible time with an utter show of disrespect to the Queen and the Crown,” Campus coordinator for the UQ Monarchist League, Jack Barton said in an interview with 2GB.