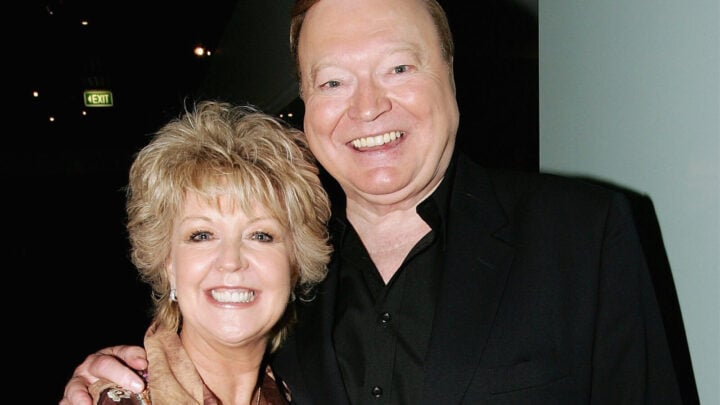 Bert and Patti Newton shared "a love for the ages". Source: Getty

Patti Newton, the heartbroken widow of the late Bert Newton, has confirmed to The Daily Mail that the pair’s son Matthew Newton, will not be returning from New York to attend his father’s funeral.

Bert Newton’s state funeral will be held in Melbourne this week, however, Patti says “the logistics of it all, and with Covid, and with everything else” will prevent Matthew’s timely return.

Patti shared that Matthew and Bert remained in contact over Bert’s final days, via video calls; often discussing their shared love of old Hollywood, with Matthew revisiting some of his father’s favourite anecdotes.

“He [Matthew] had the best conversations [with Bert]. They’re both into movies and things, so they talked about old movies and I think the height of the conversation was about Glenn Ford because Bert was the only one that Glenn Ford would speak to and Matthew had heard the story and he wanted to hear it again.”

“He won’t be coming. For no reason. I don’t know, I mean maybe he needs to put a statement out to stop everybody thinking that there’s a rift or something,” Patti told The Daily Mail.

Patti put a brave face on, sharing that it was okay that Matthew would miss his father’s funeral, because it would be “a bit sad” for Matthew to come back to see his father, after his father had already died.

Patti said, “I would find that a bit sad if the time that he saw him was when he wasn’t really alive.”

Australia’s favourite television legend Bert Newton performed one final act of love for his family before he passed on October 30, 2021, at age 83, his heartbroken wife Patti has revealed.

Surrendering after a long battle with his health, in palliative care at a private clinic in Melbourne, Newton took his final breaths alone at 7.22pm.

Patti Newton has spoken for the first time since Bert’s passing, saying that her husband of 47 years “just couldn’t do it anymore”.

Speaking from her driveway in front of the suburban home she had shared with Bert for decades, Patti spoke of how her beloved husband had departed the world. Patti believes he didn’t want her to suffer the pain of seeing him go, and so waited until she had left for the day.

Patti recounted the final time she saw Bert, saying “I left the clinic at ten past seven, and I was just pulling around to come into my drive and I get the call to say he’d taken his last breath at 7.22pm”.

“I missed him, but maybe he didn’t want me to be there for his last breath,” Patti shared.

“It’s very, very devastating. All our hearts are breaking because he was just the most wonderful man.”

“He had such a fabulous attitude. And he gave us so much joy right up to the end,” Patti reminisced.

However, this attitude was not easy to maintain, as he had recently been battling very poor health. In May, Bert had his leg amputated following a toe infection.

Patti shared, “His year was not only tough health-wise, but mentally he had a lot to cope with.”

“I love that attitude of his, he was never going to give up and that’s what we have to take with us, don’t we girls?” Patti said, surrounded by two granddaughters Eva, 12, and Lola, 9, who Patti said had taken Bert’s death incredibly hard.

Compounding the family’s grief are reports speculating that their screenwriter son Matthew is “unlikely” to make it home from New York for the funeral this week. There is a troubled history between Matthew and his parents.

“We will all have an opportunity to honour his memory, his talent and his achievements at a state funeral — details will be shared in the coming days,” Andrews said.