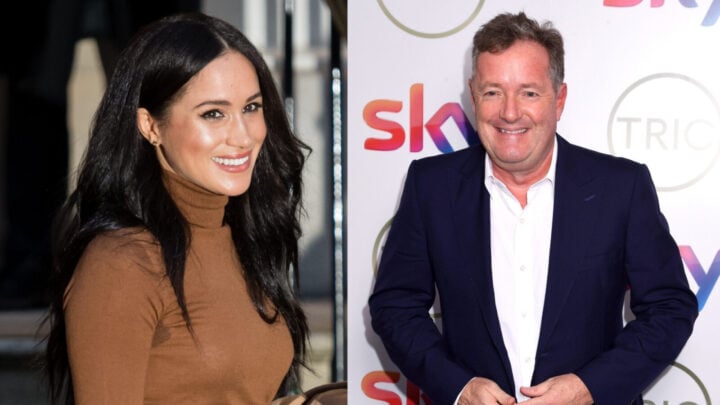 He's at it again! When it comes to Meghan Markle these day, Piers Morgan seems to only see red. Source: Getty

British broadcaster Piers Morgan has launched another blistering attack on Meghan Markle, after news broke Tuesday that the Duchess of Sussex will soon be releasing her first children’s book. The story, titled The Bench, is due out June 8 through Random House, and is about the “special bond” between father and child.

In a statement about her new book, Meghan further explained the premise and her motivation. “The Bench started as a poem I wrote for my husband on Father’s Day, the month after Archie was born,” she said. “That poem became this story … [My hope is that the illustrations capture] the warmth, joy and comfort of the relationship between fathers and sons from all walks of life. This representation was particularly important to me … and I worked closely to depict this special bond through an inclusive lens. My hope is that The Bench resonates with every family, no matter the makeup, as much as it does with mine.”

In a column for the Daily Mail Wednesday, titled “How the hell can Meghan ‘I hate royalty but call me Duchess’ Markle preach about father-child relationships when she’s disowned her own dad and wrecked her husband’s relationship with his?”, Piers described The Bench as being a perfect contender for the title of ‘World’s Most Ludicrously Inappropriate Book’.

He went on to say in the column, “Notwithstanding Ms Markle’s seemingly unlimited thirst for committing attention-seeking acts of gargantuan hypocrisy, this [book] seemed beyond parody. But it was real. I laughed out loud when the news broke via her ecstatic publishers, and even louder when I read the accompanying gush-laden statements.”

In their publicly released statement, Penguin Random House said, “The Duchess of Sussex’s debut touchingly captures the evolving and expanding relationship between fathers and sons and reminds us of the many ways that love can take shape and be expressed in a modern family.”

Piers continued in his column, “I wonder how much these touching sentiments will resonate with her own family, or her husband’s? Lest we forget, Ms Markle has ruthlessly disowned her father Thomas and refuses to have anything to do with him despite the fact they now live just 70 miles [110 kilometres] from each other.

“She is also reported to have disowned every other Markle, none of whom were invited to her wedding. This doesn’t seem like someone overly keen to operate ‘an inclusive lens’ to me. In fact, it seems a singularly EX-clusive lens.

“[In their interview with Oprah, Harry and Megan] also branded Harry’s royal family a bunch of heartless racists, though no evidence has yet emerged to support any of their outrageously hurtful and damaging claims. And they repeatedly attacked the institution of the monarchy and everything it stands for. Yet when it comes to flogging her book, what author name does Meghan Markle use? Ah, of course: ‘Meghan, The Duchess of Sussex.”

Piers’ scathing attack comes roughly two months after his now-famous rant about Meghan’s interview with Oprah Winfrey, in which he stormed off the set of ITV’s Good Morning Britain breakfast TV show, never to return as host. He was heavily criticised by his co-hosts for the attack on Meghan, which they viewed as baseless.

News of the children’s book’s release comes just days ahead of Meghan and Prince Harry’s son Archie’s second birthday celebrations on Thursday, May 6.

What do you think about Meghan Markle's new book? Touching or tone deaf?