Noni Hazlehurst is your typical, overbearing mother and she’s not sorry 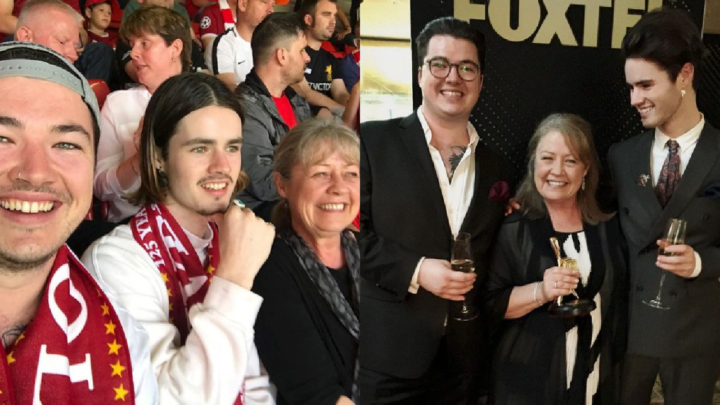 Noni Hazlehurst is no stranger to the challenges of parenthood. Source: Noni Hazlehurst/Instagram (Pictured from L-R Charlie, William and Noni)

Australian actress Noni Hazlehurst is back on the big screen, this time portraying a controlling, overbearing mother — a role Noni humorously says wasn’t too hard to play.

The heartfelt comedy, titled June Again, follows family matriarch June (played by Noni) who is suffering from dementia, but thanks to a medical miracle, regains her memory for a few days only to find her children have sold her home, aren’t on speaking terms and have let the family business spiral into disarray.

June sees her newfound freedom as an opportunity to get the family back on track, but her meddling ways backfire and she quickly finds herself in strife with her adult children.

Now speaking exclusively to Starts at 60, Noni says she knows all too well what it’s like to be that overbearing parent, adding her kids would probably get a kick out of seeing June get her just desserts in the film.

“I think most mothers want their kids to be a certain way, and you know get frustrated when they’re not necessarily fulfilling what you think is their destiny,” Noni explains.

The 67-year-old, who has two children from her marriage to fellow Aussie actor John Jarratt, has now learned to pull back when necessary but says it’s still hard not to worry about her sons.

“My boys are now 33 and 27, and they’re both married and they’re on their own paths and I’ve learnt that now. The older one said to me a while ago ‘don’t worry about me’ and I said to him ‘that’s the thing, I always will’.”

Noni has been involved in a string of stellar Aussie film and TV productions in recent years, tackling big themes that reflect her own experiences throughout her life, themes like euthanasia in The End, hidden pasts in Every Family Has A Secret and family tensions in June Again. Touching on her own strained relationship with her mother, Noni says she’s tried not to make the same mistakes with her own children.

“My mum and I didn’t have a super-close relationship,” Noni says. “She had a lot of secrets that she didn’t want to tell me much about … so that kind of distance I could relate to.”

It was only when her mother revealed on her deathbed that she’d been harbouring intense grief and guilt her entire life after surviving World War II that Noni began to understand why they’d never been able to bond. Noni revealed in a 2018 episode of Who Do You Think You Are that her mother Leonie and her older brother Cameron, who was a baby at the time, were left alone in their Blackpool, UK, home for six years after her father, George, left to serve in the army during the war. Their house was repeatedly bombed and Leonie, alone and scared, used to hide under the stairs with her baby in her arms as the shrapnel rained down from the sky.

“It was only afterwards that I found out some of the things she’d not wanted to [share]. It was painful and I understand that, but I felt having that wall up meant we couldn’t have the relationship that I would’ve loved. It was always a mother and daughter relationship, never a woman to woman relationship.”

Noni says she’s tried to not to let history repeat itself with her own children and purposely worked to have an open and honest relationship with her boys, especially once she became a single mother.

Asked why she’s increasingly drawn to stories that highlight the issues older Australians are facing, Noni says it’s a reflection of who she is right now in her own life.

“Well, I can’t really play anyone else other than what I am,” she says. “I’ve never had work done so you know I bear every wrinkle with pride.”

June Again lands in Australian cinemas next Thursday, May 6.

Can you relate to Noni's story? What's your relationship with your kids like?