Nicole Kidman rocks out with husband Keith in at-home concert 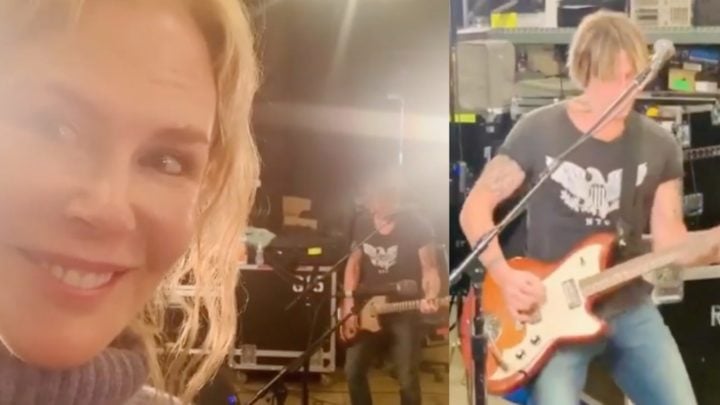 Nicole Kidman was the perfect roadie for her husband Keith Urban as he performed in their home garage. Source: Instagram/Nicole Kidman

Nicole Kidman and her hubby Keith Urban are keeping themselves entertained in self-isolation, and ensuring their fans are too, performing concerts from their garage.

The Aussie actress took to social media this week to show off her husband’s musical skills, posting a short video of him rocking out on his guitar. Nicole dubbed herself an “at home roadie” and gave an insight into how she’s spending her days in isolation.

“This is how I get to hang out now,” she said to the camera as Keith played a guitar solo in the background.

This is what being an at home roadie looks like 🎸❤️ @KeithUrban

The 52-year-old looked gorgeous in the video, wearing a grey turtle neck jumper, while her blonde curls framed her face. Meanwhile, Keith sported a casual look in a comfy t-shirt and jeans.

While he didn’t have a live audience cheering him on, the country music star, whose most-loved songs include ‘Blue Ain’t Your Colour’ and ‘Somebody Like You’, still showed off his best skills, strumming his guitar and kicking his leg up in the air. The camera then panned back to Nicole who gave a thumbs up.

The video garnered plenty of support from fans, with one writing: “Nicole … you are one lucky woman. And you are appreciative. Keep smiling and glad you are both safe.”

“Awesome Nicole. Being Keith’s roadie sounds fun. Love you guys,” @libbyjett said. While @jwlofthenile added: “Lovely Nicole. It’s splendid you are so busy but so heavenly you would take the time to give back and post to inspire.”

Nicole’s latest post comes just weeks after she appeared in another of her husband’s at-home concerts which was streamed live to Instagram. The actress showed off her killer dance moves in the performance, appearing as Keith’s back-up dancer for an impromptu show in their warehouse.

The country singer had been due to perform a concert for thousands of devoted fans, however, due to strict coronavirus rules he was forced to axe the show. The talented musician didn’t want to let his fans down though, and decided to play a 30-minute show from home with the support of Nicole.

Keith shared a live video of the performance for all to see on social media, with the star explaining he wanted to “bring a little bit of entertainment into your screens”.

“Hi everyone, we are coming to you live from our warehouse actually, this is where we store all of our gear,” he said in the clip on Instagram. “We thought we’d set this stream up tonight, mostly because I was supposed to be playing tonight and I just thought it would be nice to be able to play anyway, even though we can’t be in front of all you guys tonight.”

Are you a fan of Nicole Kidman and Keith Urban? How are you keeping yourself entertained in self-isolation?