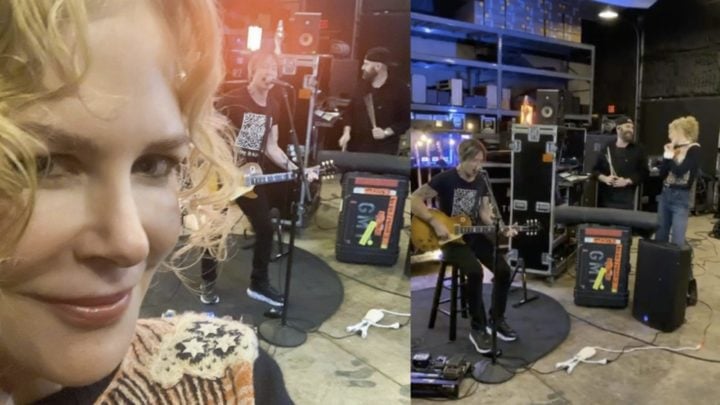 Nicole Kidman showed off her killer dance moves this week, appearing as her husband Keith Urban’s back-up dancer for an impromptu live performance in their warehouse.

The country singer had been due to perform a concert for thousands of devoted fans on Monday, however due to strict coronavirus rules he had to axe the show. The talented musician didn’t want to let his fans down though, and hence decided to play a 30-minute show from home with the support of his loving wife Nicole.

Keith shared a live video of the performance for all to see on social media, with the star explaining he wanted to “bring a little bit of entertainment into your screens”.

“Hi everyone, we are coming to you live from our warehouse actually, this is where we store all of our gear,” he said in the clip on Instagram. “We thought we’d set this stream up tonight, mostly because I was supposed to be playing tonight and I just thought it would be nice to be able to play anyway, even though we can’t be in front of all you guys tonight.”

After the short introduction, Keith began playing his much-loved hit songs, with Nicole soon joining him for a dance. The actress looked relaxed and full of joy, wearing jeans, a casual long-sleeve top and black boots. She let her natural curly locks run free in a messy bun for the fun-filled show.

At first Nicole sat on a stool behind her husband while he played his tunes, swaying to the music and singing along. Then as the song hit its chorus she stood up and started dancing in the background, swinging her hips and letting the music take over.

After a while she disappeared behind the camera letting her husband take centre stage for most of the show before re-appearing again for the final songs. Near the end of the 30 minute set she could be seen laughing along with her husband, with a big smile spread right across the face.

“Nic, thank you very much baby girl,” Keith can be heard saying before bringing the concert to an end.

Fans were quick to praise the celebrity couple for the show, with many saying how much it had brightened up their day.

“I love him and his wife,” @brendapmartinez1970 wrote on the Instagram post. “He’s such a down to earth person and so humble and great for putting [on] the show. Thank you so much for picking up our spirits.”

“Thank you for the mini concert! It made my day,” @rosieeva said. While @seemavarughese added: “Thanks for bringing sunshine into these crazy times … you rock.”

Are you a fan of Keith Urban and Nicole Kidman? What did you think of his impromptu at-home concert?