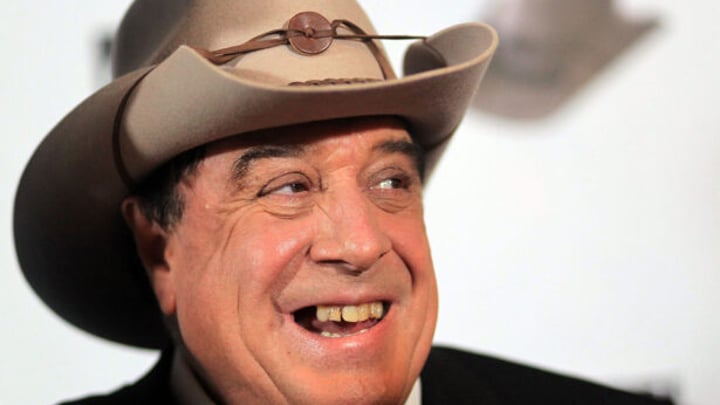 Following the incident and considerable public backlash, Meldrum offered an apology for his behaviour, conceding that he "shouldn’t have ventured on stage". Source: Getty Images.

Television icon Ian “Molly” Meldrum has offered an apology for exposing his buttocks to concert goers during Elton John’s farewell performance in Melbourne, blaming the incident on a broken belt buckle.

Meldrum, 79, made headlines when he was brought up on stage during the Farewell Yellow Brick Road show on Friday, January 13 after Elton delivered a moving tribute to the legendary music critic.

“I’ve known Molly ever since I’ve been coming to Australia,” Elton told the crowd.

“He’s helped me so much in Australia, he’s helped every single musician who’s been here.

“He’s honestly a national treasure. I want to thank him for the love and loyalty he’s shown me over the years. He’s an amazing man. Molly, thank you so much, I love you.”

Meldrum later took to the stage, joining Elton for a performance of The Bitch Is Back, where he proceeded to expose his bare buttocks to the crowd.

Following the incident and the public backlash that followed, Meldrum offered an apology for his behaviour, conceding that he “shouldn’t have ventured on stage”.

“ I just wanted to tell Elton that I loved him,” Meldrum told The Herald Sun.

“Some people thought it was part of the show. It wasn’t. Elton had no idea I was going to jump on stage, nor did the promoter, ­Michael Chugg, who’s also a dear friend of mine.

“I feel terrible if any of the security people get in trouble. The whole thing was 100 per cent my idea – no one else knew what I was doing. Elton might have been singing The Bitch is Back but it was more a case of The Idiot is Back.”

Meldrum admitted that he “got carried away” once he took to the stage and that his “belt buckle broke”, his “pants were falling down” and “one thing led to another”.

“The security people couldn’t do anything to stop a crazy man in a cowboy hat,” Meldrum said.

“It’s not the first time, and sadly, it probably won’t be the last, but I got carried away in the ­moment.

“I should have just given Elton a kiss and got off the stage. But when you’re that close to a genius at work, it’s something to savour.

“I shouldn’t have crashed Elton’s show. As for my performance being more revealing than it should have been … well, at the start of the night, my belt buckle broke and my pants were already falling down. And on stage, one thing led to another.

“I just hope my antics didn’t detract from a truly spectacular show and Elton’s fabulous farewell. No one is to blame apart from me.

“Elton is an icon and a legend. I’m just a naughty boy, who needs a new belt.”

Following Meldrum’s very public exposure, social media was flooded with a mixed bag of responses to the incident, some finding the humour in the situation while others condemned the Aussie icon for his behaviour.

Molly Meldrum has done more to lift our spirits with one moon than any Albo or Dan could, after the past few years.

King Charles should give Molly a knighthood. Or do a dignified, Goons-style piss-take of it.

You still need to iron that butt, Molly… https://t.co/34kDnVtlvZ

the molly meldrum thing, on stage with #EltonJohn
i find it very sad and cringeworthy.
but i would think the same if it was just elton on stage without that happening.
some people need to get the message and retire while on top,
gone on too long….

I think Molly Meldrum should have put his hat over his arse.

Everyone complaining that Molly Meldrum spoiled an Elton John song by climbing on stage, mooning the audience, and snogging the star: I don’t think you guys understand rock’n’roll.

Meldrum’s latest public appearance, although memorable, is a rarity for the 79 year old with public outings becoming few and far between after he was severely injured in a fall in December 2011. After being found unconscious in the backyard of his Richmond home, he was placed in intensive care at the Alfred Hospital and received surgery for head injuries. In addition to his head injuries, he suffered a broken shoulder, broken ribs, a punctured lung and cracked vertebrae and was in a coma for five weeks.

In a 2021 interview, Meldrum told New Idea that the accident made him “realise that life is short.”

“I was very lucky that I had many wonderful people caring for me at the time of the accident and afterwards, which was a real godsend. I also learnt a lot from the patients in the hospital. Hearing their stories, the hardships they’ve had to go through, it was humbling,” he said.

Meldrum is well known for his long standing career as a music critic, journalist and record producer. He is best known for his work as on- air interviewer and music news presenter for the former popular music program Countdown.

He was made a Member of the Order of Australia in 1986 for “service to the fostering of international relief and to youth” and in 2014 was inducted into the ARIA Hall of Fame, making him the first non-artist to receive the honour.