Australia’s $1 trillion problem explained: What our national debt means for you 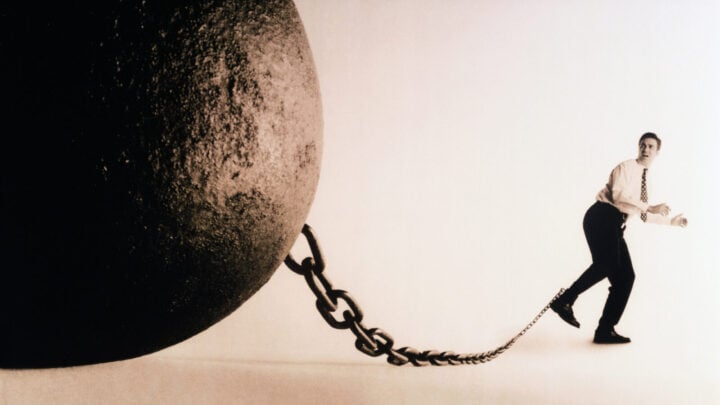 Of our 25 million population, only about 40 per cent actually pay income tax. So for every taxpayer, there’s about $100,000 in government debt. Source: Getty

I’ve been a budget junkie from an early age. In the 1970s, I remember joining the grown-ups in front of the 20-inch Philips TV and watching the treasurer make statements like “this budget secures Australia’s future”, before announcing cuts to health and education.

Okay, that was a long time ago, and many things have changed. But in the 45 or so budgets I’ve taken an interest in, there’s an obvious pattern. ‘Good’ budgets – the ones that don’t slash services or slug people with new taxes – only happen just before an election. ‘Bad’ budgets usually come right after a government has been elected (you might remember Malcolm Fraser’s Razor Gang in 1981). That way, there are three years to make amends before facing voters again.

In that context, last week’s Budget 2021-22 was a ‘good’ Budget. That’s not surprising, given the government is trying to upset as few people as possible as it gears up for an election that could come as early as August. But you’re not here to cop a lecture in political science. You want to know how the budget affects you.

Most analyses of the budget breaks things down into winners and losers, and as I’ll explain a bit later, there are no long-term winners in this budget. In the short-term though, if you’re aged 60 or more, go and crack the champagne.

After the cost of the government’s Covid-19 stimulus, you might have expected some belt-tightening. But for many Baby Boomers with some money invested, it doesn’t get much better than this. There’s some welcome extra funding for aged care, which goes some way towards making sure older Aussies get the help and support they need and deserve.

There’s a big opportunity for those over 60 to reshape their retirement plans, either through the downsizing tax incentives or the rejig of the Pension Loans Scheme. And anyone aged between 67 and 74 can now make contributions to super, even if they’re already retired. Taking advantage of this could reshape your financial future (I’ll be talking more about this soon but in the meantime, here’s some pointers on the key bits of the budget relevant to over-60s).

These are all benefits planned for the next year. Beyond that, things don’t look as rosy.

The debt and deficit difference

If you want to get your head around what the budget actually means, it’s important to understand the difference between deficit and debt. If government spending (on things like health, pensions, roads, politicians travel allowances) is more than it raises in taxes, the budget is in deficit.

If it’s the other way around – when spending is less than taxes raised – we have a budget surplus. You don’t need to trouble yourself with that though, because there hasn’t been a surplus since 2008, and won’t be another for at least another decade. For example, in the current financial year, the government expects to have raised nearly $500 billion in taxes. But spending will be about $660 billion, meaning there isn’t enough money to pay the bills.

This year’s $160 billion deficit has pushed the government’s debt above $600 billion. Within four years, it will be nearly $1 trillion.

It’s hard to fathom how much $1 trillion is. Once it sinks in that it’s $1 followed by 12 zeroes, or enough to buy a small foreign nation, you might begin to worry about how it’s going to be paid back.

You shouldn’t worry, according to Treasurer Josh Frydenberg. In the budget, there’s no mention of a trillion-dollar debt. Instead, we get weasel words like debt as a percentage of Gross Domestic Product (GDP). We’re also reassured that we’re doing better than the US and Japan. Of course we’re still way behind China, Russia, New Zealand and more than 100 other nations.

Let’s put it another way. That trillion-dollar (actually, it’s only $980 billion) debt represents about $40,000 for every man, woman and child in Australia. Of our 25 million population, only about 40 per cent actually pay income tax. So for every taxpayer, there’s about $100,000 in government debt.

If you’re reading this, you probably lived through the era of interest rates approaching 20 per cent. Currently, the government is paying about 0.88 per cent interest on its borrowings. Interest rates are so low that apprentice plumbers are able to buy million-dollar houses, and their repayments are lower than the cost of renting.

Here’s the thing, though – interest rates are already rising. No, we’re not going to see 20 per cent rates again. But it’s not hard to see mortgage rates, together with the interest the government pays on its debt, doubling in the next few years.

The only way to deal with it is to spend less, and try to earn more. That’s going to be tough for that apprentice plumber. As for the next government (and the one after that), it means hitting those 10 million Australians who pay income tax hard. Either that, or cutting spending. There will need to be savage spending cuts to have any impact, so the golden days of big-spending promises might be over.

Most likely, we’re looking at a string of tax hikes, as well as cuts to services over the next decade (and more). And that’s just to pay the interest. There’s still that trillion-dollar debt to be repaid.

Does the size of Australia's debt worry you? Or are you happy with the short-term benefits of government spending?