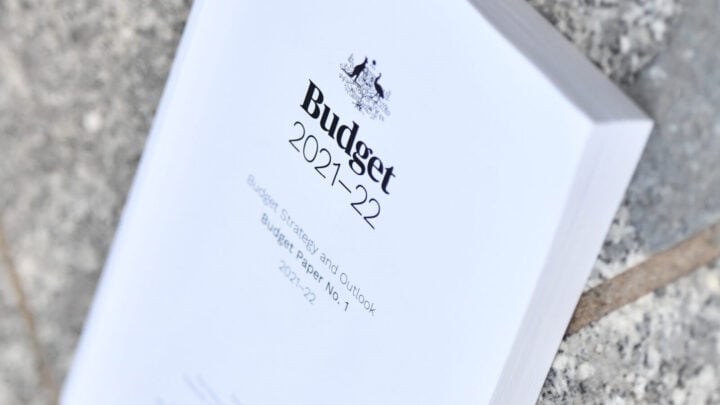 The 2021 "big spending budget" has been released, so what exactly will it mean for you? Source: Getty

The 2021 Federal Budget was unveiled last night, and — as expected — is focused on creating jobs, rebuilding the economy through investment and guaranteeing essential services. Despite fairly significant spending, the deficit is still expected to fall from $161 billion in 2020/21 to $57 billion by 2025.

Bill Evans, Westpac chief economist, said the budget delivered “a significant surprise”, describing it as a “big spending budget”, which focused on much-needed social programs, such as childcare, aged care and housing, as well as job creation through infrastructure, training and support.

So, who are the winners and what exactly will this budget mean for you?

The budget has been good news for the aged care sector, with the federal government allocating a record funding increase of $17.7 billion over the next four years. Aged Care bodies around Australia have welcomed the news and congratulated the Australian Government on agreeing to implement most of the Royal Commission’s 148 recommendations.

Patricia Sparrow, a representative of Australian Aged Care Collaboration (AACC), which represents more than 1,000 providers — said that after 20 government reviews in 20 years, this budget finally addressed many of the challenges facing aged care. She said, “Australia now spends half of what comparable countries do on aged care, and while this investment won’t close that funding gap entirely, it will provide structural relief in many critical areas.”

Council on the Ageing (COTA) described it as a “very substantial package” that will “fire the starting gun on a substantial overhaul of the aged care system over the next five years”. Ian Yates, COTA Australia chief executive, welcomed the package, in particular the significant investment in improving the home care system.

“This is a serious and meaningful response to the ‘neglect’ identified by the Aged Care Royal Commission and the need to transform the industry,” Yates said. “The new Aged Care Act in particular, along with the oversight mechanisms of an Inspector General, an Independent Pricing Authority, a National Aged Care Advisory Council and the Council of Elders, sets us on exactly the right path. We look forward to working with government on the implementation of these important measures.”

While most agree it’s a step in the right direction, CPA Australia said the new funding falls short of what many experts say is needed, and is unlikely to address the root causes of the issues identified in the Royal Commission.

Gerard Hayes, the national president of the Health Services Union (HSU), agrees that the measures have “fallen short”, saying the system had been in “chronic crisis for years” and this funding package wouldn’t change that. “This barely makes up for the $10 billion worth of cuts that have been inflicted in the last eight years,” he said. Hayes called on the government to increase the wage for aged care workers, which would ultimately attract more employees to the sector, helping alleviate the pressure on already overworked staff.

“The Grattan Institute puts the total four-year need at $28 billion, when the cost of home care is added. [Prime Minister] Scott Morrison and [Treasurer] Josh Frydenberg have delivered a fraction of what’s needed,” he said. “Aged care workers and residents had high expectations after years of banging the drum, giving evidence to the Royal Commission and pleading for change. Tonight they are disappointed, but their will is not broken. We will continue fighting for a properly resourced aged care system.”

The budget includes several changes to the superannuation system, many of which have been largely tailored towards women and low-income earners, including the reaffirmed commitment to increase the Superannuation Guarantee (SG) to 12 per cent by 2025 as legislated.

Dr Martin Fahy, Association of Superannuation Funds of Australia (ASFA) chief executive officer, welcomed the changes saying, “Australia’s superannuation system enables Australians to retire with dignity. With the legislated increase of the Superannuation Guarantee to 12 per cent, and a maturing superannuation system, we expect to see a greater proportion of retirees relying less on the Age Pension and more on their retirement savings.”

One of the overarching changes is the allocation of $1.6 million over two years to continue funding Super Consumers Australia — the independent superannuation body focused on the interests of consumers, which Fahy indicated would need to be coupled with increased accountability.

Xavier O’Halloran, director of Super Consumers Australia, was positive about the investment, saying it was “a step towards fairer super” but called for a permanent funding arrangement. “We welcome the progress made. Financial comfort in retirement is key to people’s wellbeing. Nobody should be left behind and consumers need a seat at the table for policy discussions,” he said. “Superannuation belongs to consumers. It is their money.

“This is a step towards implementing the Productivity Commission’s recommendation to fully fund a superannuation body, focused purely on the interests of consumers. In the long-term, Australians need a fully funded independent body to represent them in superannuation debates.”

The budget also abolished the $450 minimum income threshold, which will enable low-income earners to save for their retirement with every dollar they earn. O’Halloran said the threshold was an “archaic rule from a paper-based era” that left some people receiving no super for the hours they worked every week.

The government also abolished the work test rules for those people aged between 67 and 74, meaning self-funded retirees will be able to increase their super savings more freely. Under the ‘work tests’, you cannot contribute to super unless you are gainfully employed for 40 hours in a consecutive 30-day period.

Measures to improve the visibility of superannuation balances in divorce settlements were also introduced in the budget, another measure that may favour women, who statistically have less super.

“Improving the visibility of superannuation assets in divorce settlements is a sensible initiative that will make it easier for partners to access their fair share of super after separation,” O’Halloran said. “Too often, women are unfairly missing out on an equal division of assets because partners have not been transparent about their super savings. This important reform will make balances visible in separation proceedings.”

As was expected, the budget included changes to the ‘downsizing scheme’ for older Australians. As of July 1, Australians aged over 60 (previously 65) will be able to make a one-off contribution of up to $300,000 per person (or $600,000 per couple) to their super when they sell their home. The budget states the scheme will allow empty-nesters to “consider downsizing to a home that better suits their needs, thereby freeing up the stock of larger homes for younger families”. Industry Super Australia (ISA) says the scheme will be most likely to benefit wealthy self-funded retirees.

So what could this mean for you? For illustrative purposes only (assuming an earnings rate of 7.5 per cent per annum — net of fees and taxes — and the $16,351 in annual income being indexed to CPI each year), a 60-year-old adding $200,000 to their super balance would be able to draw an additional tax-free income of $16,351 per year until age 88.

Jason Murray, QSuper chief of member experience, says downsizing of family homes contributed almost $97 million to QSuper accounts in 2019-20. He said the number of members using the scheme had increased from 2018, and they expected the new changes to make the scheme more popular.

“Extension of the program to younger members will give them more flexibility in planning their retirement, adding to the sense of security about what their future income will be,” Murray said. “The downsizer contribution has become a part of the retirement income mix, allowing people to achieve two goals – to move to accommodation more suited as their family size drops and to turn the capital tied up in their home to retirement income. We expect it will be a popular measure for people aged between 60 and 65 when they can access it.”

While the aim of the change is to encourage older Australians to take up the scheme, research suggests that most older Australians feel it isn’t worth the risk of losing access to the government pension. As homes are exempt from pension access tests, any extra capital produced from the sale or downsizing of a home could be counted against pension access.

If you’re not wanting to sell just yet, the government has also tweaked its Pension Loans Scheme (PLS), which will allow older Australians who own their own home to use the equity to boost their retirement income. The scheme is entirely voluntary and is available to those claiming the age pension and self-funded retirees with the balance of the loan payable when you do eventually choose to sell your home.

Essentially the opposite of a mortgage, the PLS allows you to borrow against the value of your home, meaning you can receive a maximum lump-sum advance payment equal to 50 per cent of the maximum age pension, which is about $12,385 for singles and $18,670 for couples.

The budget has allocated $21.2 million to improving uptake of the scheme, most of which will be spent on publicising the scheme.

Dr Jane Rennie, CPA Australia general manager external affairs, said, “As the economy is gathering pace, most of the jobs growth to achieve this target will occur organically. In this environment, public spending will play a secondary role to private-sector hiring. The government is focusing on hard infrastructure to deliver its share of the jobs growth, adding to last budget’s record infrastructure spend with an additional $15 billion investment.”

Some of the investments allocated in the budget to help boost the economy include: an additional $7.8 billion in tax cuts for low and middle-income earners, an additional $15.2 billion over 10 years to fund infrastructure commitments, $1.2 billion for aviation and tourism support, investments into growing Australia’s digital economy and the extension of the HomeBuilder construction commencement period and the New Home Guarantee.

How have the budget changes affected you?