Planning your own funeral: The basics you need to cover 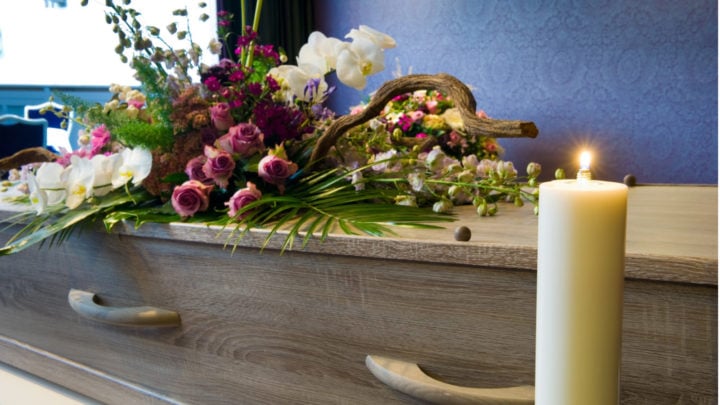 A traditional funeral with wooden coffin and flower arrangement isn't the only choice available these days. Source: Getty

Baby Boomers are rewriting the rules on funerals. As the Cemeteries and Crematoria Association of New South Wales put it recently, “these are not your grandpa’s funerals”. Instead, the individualists who make up the post-war generation are opting for send-offs that range from simple to extravagant, the association says, but always have a touches specific to the person being mourned.

No matter what your goodbye plans, however, there are some basic details it makes sense to hammer out ahead of time if you feel strongly about the type of funeral you’d like – that way, your dearest wishes can be more easily honoured by your family and friends. Starts at 60 talked to eziFunerals founder Peter Erceg about the key issues to consider when funeral planning.

When should you start planning?

Death, obviously, can come at any time, which is why it’s best not to postpone funeral planning. Erceg, who runs a website that guides people through the funeral planning process, says the process is relatively simple and certainly not time consuming.

“We are seeing more and more Baby Boomers encouraging their parents to start planning their funerals; they aren’t afraid to bring up the conversation and start to record their parents wishes,” he told Starts at 60. “At the same time, many are considering what they want for themselves as well. It only takes minutes, maybe hours, to plan what you want, so when you die all your family have to do is get quotes and select a funeral director.”

As well as ensuring that loved ones can say goodbye to you in the way you envisage, Erceg points out that planning ahead minimises the burden on family and friends left behind, as well as diffusing any arguments that could arise.

“A funeral is an important event for a grieving family,” he says. “It can provide a sense of closure and enables the family to begin the healing process. Families benefit emotionally and socially by honouring the lives of their loved ones with a fitting ceremony and by giving them a proper send off.”

Burial, cremation or something else?

The first step you need to take when planning a funeral is to decide what you prefer to have done with your remains. While burials were long the most common choice, according to Erceg, the popularity of cremations has skyrocketed, particularly in major cities.

“Whilst there is some variance between states and territories, cremations now generally outnumber burials,” he says. “Cremation funerals are much more common in city areas where crematory facilities are available, while burials predominate in rural and remote regions.”

There are pros and cons for each, with burial generally being slightly more expensive than cremation.

As well as being more cost effective, cremation provides the option of having your ashes scattered at a place special to you, rather than in a cemetery. The scattering of ashes is subject to different rules in each state and territory in Australia, though. For example, you need permission from the Trust of Parks and Reserves before scattering ashes in a park in New South Wales but in Queensland, no special permit or permission is required. Make sure you obtain permission from the owner if you wish to scatter ashes on private land.

Burials don’t necessarily need to be undertaken at a cemetery, either. Some states allow you to apply to be buried on private property, with certain restrictions in place depending on where you choose. For example, in New South Wales the property must be bigger than five hectares and needs to be approved by local authority, while in Victoria an application has to be made to the Secretary of the Health Department.

If a coffin or casket isn’t your thing, you can even forego one altogether, choosing to be buried in a natural burial site. Most Australian states and territories have certain areas where this can be done, with trees or shrubs planted on the grave. Biodegradable coffins, such as those made with cardboard, are also popular, and there’s no obligation to buy a coffin or casket from the funeral home you’ve chosen – you can make your own or buy one online, as long as it meets the standards set by the cemetery you’ve chosen.

There are some more alternative options that may appeal if you want to go even less traditional; people have had their ashes mixed with concrete and used to build artificial reefs, encased in an hourglass or compressed into diamonds. The Gold Coast City Council in Queensland last year proposed the creation of an underwater cemetery that could see people scuba diving to pay their respects at interment sites off the coast of Queensland. Based on the Neptune Memorial Reef in Florida, the ocean-bed cemetery is meant to combat the overcrowding of regular cemeteries in an environmentally friendly way by mixing ashes with materials.

If something sky high is more to your taste than the ocean depths, Craig Hull, a Sydney pyrotechnic, runs a company called Ashes to Ashes that will scatter your ashes via a fireworks display.

Another thing to consider is how you wish to be remembered; would you prefer a solemn occasion for your grieving loved ones or a more upbeat celebration of your life? According to the eziFunerals founder, many people now forgo traditional funeral homes to hold funerals at places of significance such as parks, beaches and sports facilities, with music and other performances organised create an entertaining event.

“In 1960, Judy Garland performed the popular song ‘That’s Entertainment’, which has become an anthem as an opening number in many shows,” Erceg explains. “Just like that famous song, the funeral is now becoming like a show, a big production, a celebration of life.”

The atmosphere of your send-off can be organised down to the colours mourners are asked to wear, the songs or music you choose to be played and whether you replace flowers with balloons, charitable donations or another item meaningful to you, to whether you decide to have readings of significant poems, feature videos, photo galleries or other multimedia presentations compiled of your life, or create keepsakes created for mourners to take with them in memory of you.

Some people go as far as theming their funeral, with super hero fancy dress or films such as Star Wars providing inspiration for the dress code.

If you’re not fussed about having a service held at a funeral home on the day of your interment, it’s worth considering a less formal memorial service, held somewhere such as a friend or family member’s home, your favourite restaurant or bar or even your football club. Memorial services take place after your body has been buried, cremated or otherwise disposed of, and can take place days or weeks afterward.

While choosing an executor of your will is the norm, you may not have considered appointing a funeral guardian. Erceg says it’s smart idea to choose a particular person, whether it be a family member or trusted friend, to ensure your wishes are honoured just as you spelt out in your funeral plan.

Work out your costs

According to a 2018 study by finder.com.au, the average funeral cost in Australia is $7,449, with some cities slightly more expensive. For example, if you live in Sydney, expect to pay around $8,357, while Hobart residents will pay about $6,832. Those numbers are based on the starting price for burials and cremations at the major service providers, though, so customisation such as cultural or religious requirements, flowers or funerals notices will increase the cost.

It’s worth remembering that there are options for most budgets, from cremations costing as little as $1,200 to funeral providers who will organise video-conferencing from the service so loved ones living overseas can tune in. It your budget is tight, it’s possible to opt for a direct committal, which means your body is taken from the place of death to your burial or cremation without any funeral service at all, or there are non-profit funeral homes that offer cheaper funerals than those available from mainstream brands.

Either way, establishing at least a rough idea of your funeral costs and talking to your close family members about how you intend to cover them is sensible. If you’re concerned that any type of funeral may be more than you can afford, some states and territories offer assistance with funeral costs for people unable to raise the funds for a funeral – it’s best to search online for the most appropriate service in your location.

Have you planned your funeral or helped a relative plan theirs? What would you want at your own send-off?